NCB Purchasing Manager Indices for Manufacturing for Ireland are out this morning with a deserved upbeat soundings on foot of the core data showing continued growth in the sector. Here are some details, both worth a positive overall note and some warning signs of potential tightness ahead.

Business conditions continued to improve in the Irish manufacturing sector during November, marking the ninth consecutive month of such increases, though there were slower rises in output and new orders.

Overall PMI was running at 52.4 in November, slightly up on October 52.1. November reading was the highest since July 2012. Strictly-speaking, both October and November indices were statistically indistinguishable from 50.0, however, with the last index reading that was statistically significantly above 50.0 was July 2012 and the last time this happened before then was April 2011. 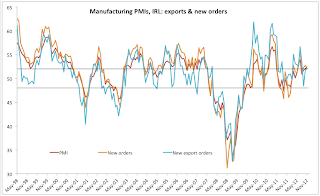 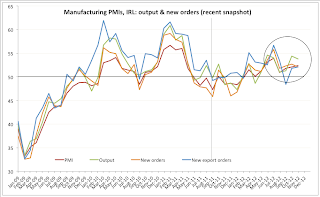 
Per Markit/NCB release: "According to respondents, slower growth of new business enabled manufacturers to work through outstanding business. Backlogs of work decreased for the twenty-first month running, albeit at a reduced rate." This is illustrated below: 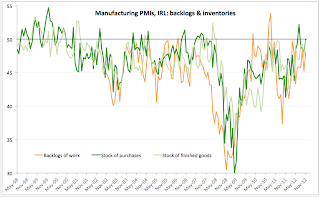 As you know, I usually run more detailed comparatives on input/output prices and profitability in a separate post, once Services sector data comes in. But some reflections here: 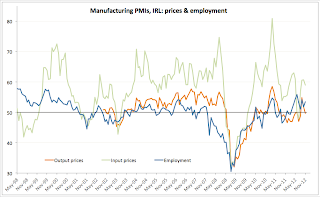 Lastly, per chart above, employment:


Net conclusion: good PMI readings, especially considering that Euro area continues to tank and global trade slowdown is yet to be reversed. Some tightness on profit margins and weakening new orders growth rate are to be watched. However, the two warning signals above are likely to be offset by the stocks rebuilding in months ahead, should new orders hit a slowdown.

Updated:
Manufacturing PMIs across the euro zone contracted for a sixteenth consecutive month in November, with last month's reading at 46.2, up on 45.4 in October. November marks the slowest pace of contraction in eight months, but the downturn remains strong. New exports continued decline, while Italy PMI is down to a 3mo low of 45.1 and Spain is at 45.3.


The Markit/HSBC China Manufacturing PMI for November rose to 50.5, up from 49.5 in October hitting for the first time in 13 months the 50.0 mark.

Posted by TrueEconomics at 10:02 AM