"A combination of slower growth, higher unemployment, and the over-run in health spending, have dimmed prospects for any significant fiscal over performance in 2012. Indeed, given the weak economic conditions, only about half of the 6 percent of GDP consolidation effort over 2011-12 has translated into headline primary balance improvement. [Meaning that we've been running into a massive headwind, with pants caught on rose bushes behind us...] Nonetheless, the authorities‘ consistent achievement of the original program fiscal targets despite adverse macroeconomic conditions gives confidence in their institutional capacity and commitment to consolidation."

Question is, when will rose bushes thorns get our fiscal pants shredded? We don't know, but here's the road ahead: 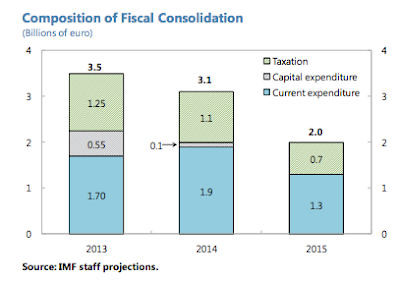 Of course, we knew this before, but it is a nice reminder that Enda Kenny's claim that Budget 2013 is going to be the hardest of all budgets is simply bull - the above figures have to be delivered on top of Enda's 'hardest' Budget 2013. Per IMF, however:
"The program envisages additional consolidation of 3 percent of GDP over 2014–15. Taking into account the measures already specified for these years (such as on capital spending), and carryover savings from earlier measures, new measures of about 1½ to 2 percent of GDP remain to be identified for 2014-15.

"To maximize the credibility of fiscal consolidation, and to reduce household and business uncertainties, the authorities should set out directions for some of the deeper reforms that will deliver this effort. These could include, for instance, on the revenue side, reforming tax reliefs on private pension contributions; and on the expenditure side, greater use of generic drugs and primary and community healthcare, and an affordable loan scheme for tertiary education to enable rising demand to be met at reasonable cost."

Now, in spirit with IMF paper, let me reproduce for you a box-out from IMF report on public sector wages in Ireland: 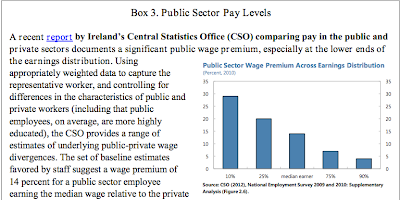 Enjoy the above - you can enlarge the text by clicking on the images.
Posted by TrueEconomics at 9:05 PM