No, this is not a joke, but, put in econo-astronomical terms, the Universe is amidst a Great Depression. 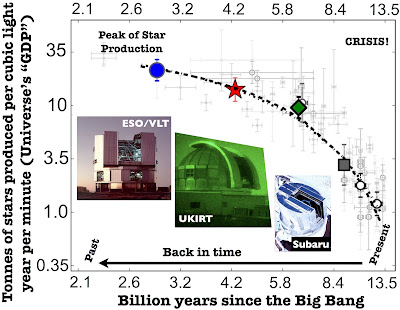 Admittedly, the time series above are not compatible with international GDP metrics and neither CEPR (for Europe) nor NBER (for the US) have called this business cycle, but... per Royal Astronomical Society:
"In the largest ever study of its kind, the international team of astronomers has established that the rate of formation of new stars in the Universe is now only 1/30th of its peak and that this decline is only set to continue..."

"Much of the dust and gas from stellar explosions was (and is still) recycled to form newer and newer generations of stars. Our Sun, for example, is thought to be a third generation star, and has a very typical mass by today's standards. But regardless of their mass and properties, stars are key ingredients of galaxies like our own Milky Way."

And here's the worrying bit: "By looking at the light from clouds of gas and dust in these galaxies where stars are forming, the team are able to assess the rate at which stars are being born. They find that the production of stars in the universe as a whole has been continuously declining over the last 11 billion years, being 30 times lower today than at its likely peak, 11 billion years ago.

Dr Sobral comments: "You might say that the universe has been suffering from a long, serious "crisis": cosmic GDP output is now only 3% of what it used to be at the peak in star production!"

'If the measured decline continues, then no more than 5% more stars will form over the remaining history of the cosmos, even if we wait forever. The research suggests that we live in a universe dominated by old stars. Half of these were born in the 'boom' that took place between 11 and 9 billion years ago and it took more than five times as long to produce the rest. "The future may seem rather dark, but we're actually quite lucky to be living in a healthy, star-forming galaxy which is going to be a strong contributor to the new stars that will form."

Now, what do we short to get a hedge on this macro?
Posted by TrueEconomics at 9:46 AM