Continuing with reading IMF latest report on Ireland, here's another bit. This time about Irish banks. Now, recall that in recent months and days we heard about Bank of Ireland and AIB meeting their lending targets, the latest data on mortgages printed a little rise in the number of them outstanding etc. The Government has been running around telling anyone willing to listen (not many, admittedly) that banks are 'repaired' and 'well-capitalized'. Here's IMF take on the comedy (emphasis is mine): 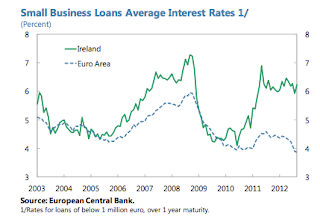 So as the economy is starving for credit, irish banks - heavily subsidized by ELA and ECB funding (see below) are gouging SMEs for every last bit they can squeeze. Jobs creation in this environment? You gotta be kidding! 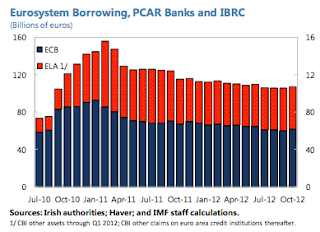 While the banks have deleveraged somewhat out of ELA and ECB (per below): 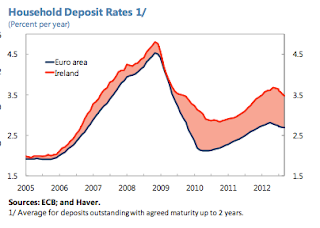 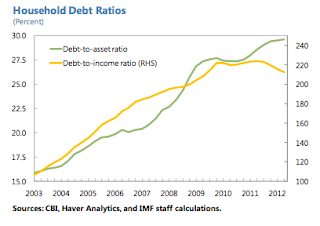 But IMF has more on Irish banks: "Domestic banks have high and rising impaired assets and remain unprofitable, which is eroding their currently strong capital buffers. Gross non-performing loans have risen to 23 percent of PCAR banks gross loans at end September, up from 17 percent a year ago, with 50 percent provisioning coverage." So: to summarize the above:


More form the IMF: "For the first three quarters of 2012, these banks reported a €0.8 billion pre provision loss excluding non-recurrent items (-0.3 percent of average assets) and, under their restructuring plans, they are not expected to break-even until 2014. Although these banks remain well capitalized, with Core Tier 1 ratios of 15.5 percent of risk-weighted assets and 7.5 percent of total assets, these buffers are expected to decline as loans are worked out and will be further eroded if operational losses persist."

What the hell does this mean, you might ask? Oh, why, let IMF speak. Here's the list of core risks faced by Ireland:

"This gradual recovery faces impediments that pose significant risks. Net exports, still the sole engine of growth, are naturally sensitive to any further weakening in trading partner activity. A sustained recovery that generates sufficient job creation also requires a revival of domestic demand, which faces a range of hurdles that create substantial uncertainty around prospects beyond the near-term:


Do note that the banks play a role in all, I mean all, of the above risks. And the risks are correlated:

"Leaning against such developments with additional fiscal consolidation may help slow down the rise in the debt ratio, but would further reduce growth and raise unemployment and increase risks of hysteresis. Moreover, the resulting higher loan losses would generate new capital needs once banks‘ buffers are exhausted, which could raise debt ratios in the medium term, heightening the challenges to
recovery. Such setbacks in Ireland would exacerbate the broader euro zone crisis..."

And now to 'Boom!' factor: The "risks around medium-term growth prospects are a key source of
fragility in Ireland‘s debt sustainability, in part because prolonged low growth could result in
new capital needs in the financial sector."

In other words, were we to so see fiscally-induced and debt-overhang enabled structurally lower growth (at current rates), the debt crisis can lead to a new capital call from the banks on the Government. In this light, all the Government talk about 'improved' banking operations are, frankly put, tripe.

Posted by TrueEconomics at 8:39 PM