In recent weeks, the Irish Government has engaged in a willful and undeniable distortion of fact. Here is one example of a senior Minister on the record saying that : ""[The Government] didn't pay the promissory note this year…"
http://www.herald.ie/news/rabbitte-rules-out-31bn-payment-for-anglo-debt-3321386.html

The same was repeated today on RTE programme.

The Ministers must know that according to the official exchequer accounts, the Promissory Note due 2012 was paid in full.

In the Budget 2013 Economic and Fiscal Outlook (official document released by the Department of Finance: http://budget.gov.ie/budgets/2013/Documents/Budget%202013%20-%20Economic%20and%20Fiscal%20Outlook.pdf) contains the following references to repayment of the Promissory Note 2012: 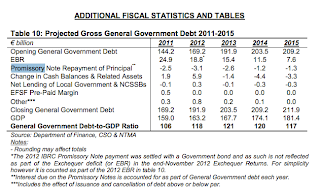 Page C.19, explanatory note to Table 10 (reproduced above): "The 2012 IBRC Promissory Note payment was settled with a Government bond…"

In Table 10 above, 2012 item for "Promissory Note Repayment of Principal" enters -€3.1 billion, fully confirming the repayment was made.

Page C.22 Table 13 clearly identifies 2012 Promissory Notes repayment as being "Non-cash payment in 2012 of IBRC promissory note" and states in the explanatory note below the table that "In 2012 the annual promissory note payment to IBRC was made with a Government bond". The same is entered on page C.5 under the Table 1.

The details of the bond settlement scheme are here:
http://www.finance.gov.ie/viewdoc.asp?DocID=7195

ECB position on what transpired vis the Promo Notes in March 2012 is outlined here: http://www.ecb.int/press/pressconf/2012/html/is120404.en.html quoting from Mario Draghi's responses to press query regarding the note payment (emphasis mine):
"we take note of the scheduled end-March redemption of the promissory notes and a subsequent reduction in Emergency Liquidity Assistance provided by the Central Bank of Ireland. We expect that the future redemptions will be met according to the schedule to which the government has committed itself."

The above was confirmed less than a week later: Few days after repayment of the March 2012 note, Joerg Asmussen, a member of the ECB's executive board, was speaking in Dublin where he "reiterated the ECB's view that Ireland must continue to repay the Anglo Irish Bank promissory note". Asmussen clearly did not believe that Ireland did not pay 2012 installment on the notes.
Soruce: http://www.rte.ie/news/2012/0411/ecb-official-warns-irish-banks-on-debt.html


The transaction of 'non-payment of cash payment' involved Irish State issuing a €3.06bn bond that was funded by Nama for the period of time it took Bank of Ireland to deliver approval by shareholders. Thereafter, the bond was transferred to the Bank of Ireland for 1 year. Which means that comes April 2013, Irish Government must have some sort of an agreement in place as to what to do with this bond. Either the Bank of Ireland agrees to hold it longer, or the bond has to be sold to another holder.

Here is NTMA Issuance Circular for that bond: http://www.ntma.ie/erratum-2015-bond-offering-circular/

Now, note: the coupon on that bond is 4.5%, far less than 5.5% issued in August 2012, after significant improvements in Irish secondary markets bond yields, so 4.5% Promo Notes Bond is a 'better' deal than ordinary bonds. Which means that Bank of Ireland was buying a dodo. Of course, Nama effectively backstopped Bank of Ireland, which simply borrowed money from the ECB to fund the bond.

Which means that were Minister Noonan to repeat the exercise comes March 2013, he will be increasing the interest bill on Promo Notes by the above amount on top of the already hefty €1.9 billion one scheduled for 2013.

Posted by TrueEconomics at 12:06 PM

Re "Thus, the cost to the taxpayers of Minister Noonan's 'non-payment' was €163.35 million annualized."

If that is correct then Minister Noonan should be sacked - that is an enormous sum of money to spend on optics.

1. the bond issued was actually a tap of the 5.4% 2025's, just random coincidence that the 15s (which was created via a swap from 13s and 14s in January) has a really similar amount issued. Coupon on that bond is 5.4%, but it was priced at market price which existed at the time, which i think gave a yield of ~6.7% or something. So actually 3.53bn was issued to make good a 3.06bn bill.


2. Coupon on this is being paid to IBRC, which we 100% own and support. Therefore the coupon cannot be considered a "cost" (Anglo will end up costing whatever it ends up costing, this transaction will not change that). The true "cost" of this transaction is the combination of the ECB refi rate (0.75%) and the BoI credit margin that was charged (130bps or something i believe), and only 85% of that credit margin(as we own 15% of BoI). So real "cost" is 2% x 3.06bn, or €61mn, minus our 15% BOI ownership "profits", so around €55mn total. However, this should be compared against how the "profits" from the ELA are distributed (ie does CBoI get all of it or some of it?), and the difference between that and the €55mn is the ultimate true cost. The alternative was to use either existing cash holdings or raise long term debt in the markets, both of which it could be fairly argued would end up being more expensive than this transaction.