Here are some interesting bits:


"Between 1 October 2008 and 1 October 2012, the Commission approved aid to the financial sector totalling €5,058.9 billion (40.3% of EU GDP). The bulk of the aid was authorised in 2008 when €3,394 billion (27.7% of EU GDP) was approved, mainly comprising guarantees on banks’ bonds and deposits. After 2008, the aid approved focused more on recapitalisation of banks and impaired asset relief rather than on guarantees, while more recently a new wave of guarantee measures was approved mainly by those countries experiencing an increase in their sovereign spreads, such as Spain and Italy.


In other words, keeping up the pretense of solvency in the legacy banking system of the EU (primarily that of the EA17) has created a cumulated risk exposure of €5.06 trillion (over 40% of the entire EU27 GDP). With such level of supports, is it any wonder there basically no new competition emerging in the sector in Europe.


"In 2011, the Commission  approved aid to the financial sector  amounting to  €274.4 billion (2% of EU GDP). The new aid approved was concentrated in a few countries and involved guarantees for €179.7 billion, liquidity measures for € 50.2 billion, recapitalisations for €38.1 billion and impaired asset relief for € 6.4 billion.

Some illustrations of historical trends. 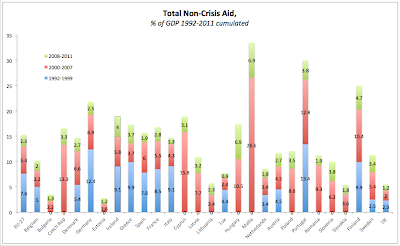 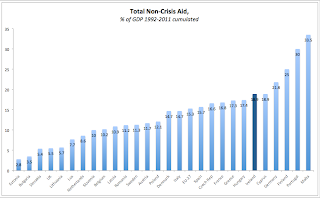 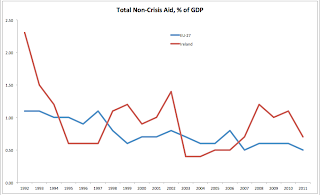 In terms of financial sector supports during the crisis, we are in a unique position: 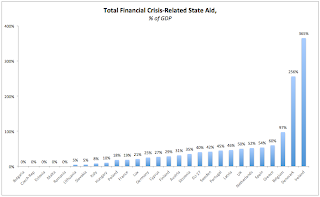 The overall level of supports for financial sector in Ireland is so out of line with reality that our state aid to insolvent financial institutions stood at 365% of our GDP in 2011 or roughly 460% of our GNP. In other words, relative to the size of our economy, the moral hazard created by the Government (and Central Bank / FR) handling of the financial crisis in Ireland is now in excess of measures deployed by the second and third worst-off countries in EU27 (Denmark and Belgium) combined. 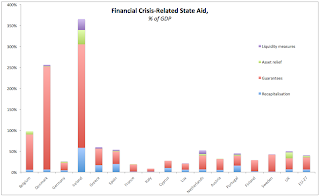 The chart above shows that Guarantees amounted to 246.7% of GDP in Ireland, almost identical to 245.7% of GDP in Denmark. Which means that our Guarantees were basically equivalent to those of seven worst-off Euro area countries combined.

However, stripping out the Guarantees, the picture becomes even less palatable for Ireland: 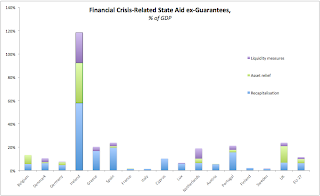 Ex-Guarantees, Irish State supports for the financial sector were more than 10 times the scale of EU27 supports and at 118.4% of GDP amounted to almost the combined supports extended by all EA12 states (123.2% of GDP).

Posted by TrueEconomics at 1:36 PM