Irish trade in goods stats are out for October 2012 and here are the core highlights (aal seasonally adjusted): 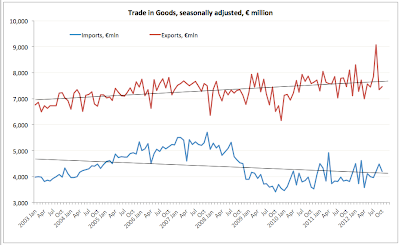 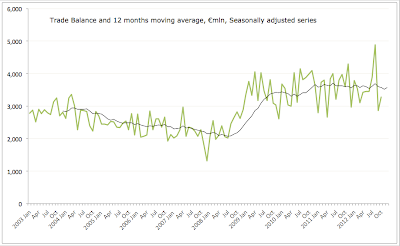 Here are some charts on the relationship between exports, imports and trade balance: 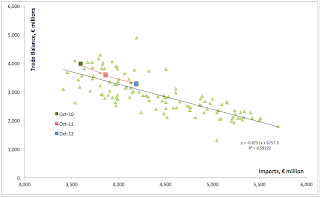 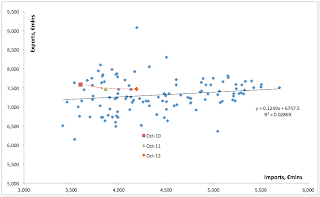 Accordingly with the above, imports intensity of exports rose slightly in October on foot of a steep fall-off in imports, rising 8.75% m/m. However, the metric of 'productivity' of irish exporting sectors is now down 7.72% y/y and down 15.38% on October 2010. During crisis period, Exports/Imports ratio averages 182.4%, while YTD the ratio averages 188.0%. In October 2012 it stood at 178.3% well behind both longer term trend metrics. 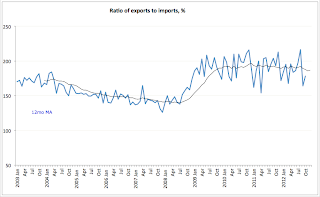 Lastly, the above relatively poor performance of exporting sector came amidst two forces, both representing adverse headwinds for Irish exporters: 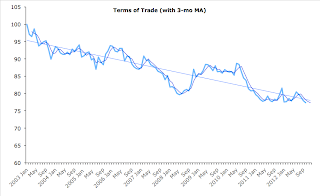 So to summarize: headline rise in tarde surplus is driven more than 3/4 by drop off in imports, with exports performing poorly on y/y basis and m/m basis. However, we have to be cognizant of the adverse headwinds experienced by irish exporters in global markets and by the continued effect of pharma patent cliff.
Posted by TrueEconomics at 11:57 AM

Constantin,
My compliments on the superb data analytics.
But I am concerned about the underlying data. Given the distorting effects of profit-shifting on values of goods imports and exports, particularly in pharma, and the unknown scale and extent of this across the last decade (i.e. is the proportion of 'phantom activity' increasing or not) can any safe conclusions be drawn from this data?
cheers

To be honst, not on any meaningful value added in real terms. For that we need to look at the data by sector, rather than by flow. However, with transfer pricing etc, we still have trade surplus recorded etc, so on flows side - meaningful analysis is possible from the above data. In terms of actual physical activity - not in short term.

To B. who asked for his/her comment to be kept private - my many thanks for the note and best wishes for you and your family for this Christmas season. And a special wish for you - keep on fighting! Wish I could have had a chance to sign those books for your friends and family.

And please, do comment any time on any topic!