Again, for across all issues averages spreads in prices rose significantly – by 8.3% and spreads in yields rose 7.85%. This is on the back of 10 year paper alone, suggesting the following two things: 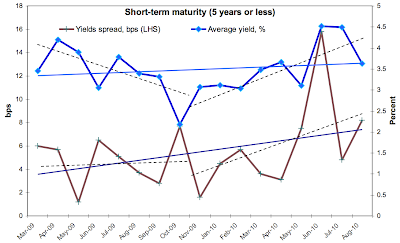 Average yield is still on the rising trend despite a clearly 'extraordinary' move down in today's auction. Even steeper upward trend for November 2009-present is still present. Yield spreads are on the upward move again once more signaling potential rise in overall market skepticism. 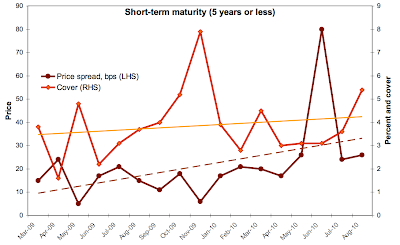 Price spread trends up predictably in line with yield spread trend. To see it in absolute terms: 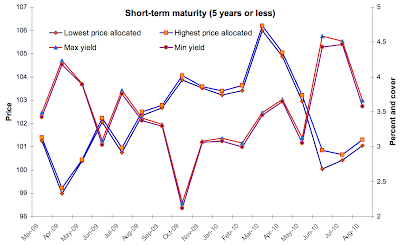 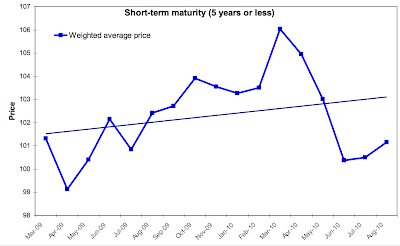 Again, if ECB speculations play out to be true, the small uptick in price in last auction can be written off completely.

Now to longer maturity (10 years and above). 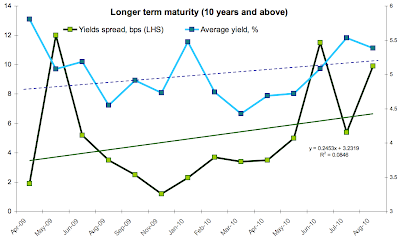 Average yield down, but still above long term trend. Yield spreads up, quite significantly. As I mentioned in the earlier post, latest auction produced yield spreads of 9.9bps - third highest spread since April 2009. 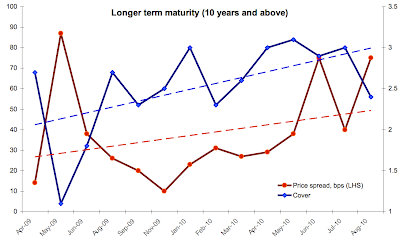 Price spreads are 75bps - second highest spread since April 2009. Cover down - lowest since February 2009 and is down year on year. Again, to highlight spreads in real terms: 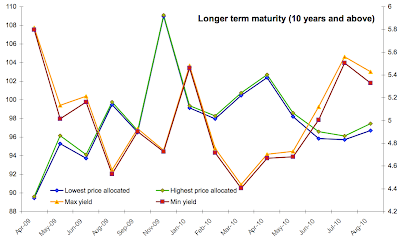 Next, look at the price achieved: 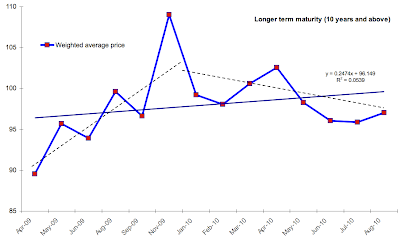 This hardly constitutes any sort of 'success'. May be, just may be - some sort of a stabilization, with mean reversion still incomplete.

Now to the maturity profile of our debt: 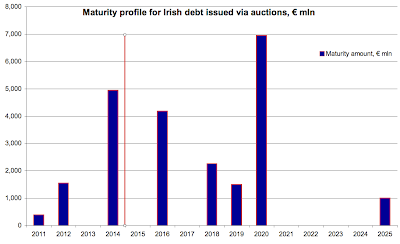 We keep on loading the 2014 end of the spectrum - bang on for the year when we are supposed to reach 3% deficit. Of course, with already close to €5 billion in rollovers due in 2014, it's hard to imagine how this is going to help our fiscal position.

Posted by TrueEconomics at 10:25 PM

Some nice analysis, however regarding your suspicion of ECB involvement in the shorter term paper - the ECB is prohibited from participation in the primary bond auction, the securities markets program only extends to secondary market purchases.

To my untrained eye, if there was such a high level of demand for this country's bond auction as stated today by NTMA, why didn't this demand not drive down the yield (on the basis that if there were bidders for our bonds, the interest applied would be lower).

I would like to see the NTMA report in detail the breakdown of todays auction and specify what amounts comprise €1.5b and the attendant interest charge per amount.

The only good thing, is that in a world wide depression, interest rates, coupons will drop to US levels. By forcing up yields now, it is costing an arm and a leg. The other limbs will be lost and of course, we must repay the principal!

And we have what to show for it? Who analysed their way into this incredible mess? Was the US situation not sufficient warning? Did we really have to look for all that funding on the wholesale market? We repeat the exercise now, but by the state and in larger amounts, simply to fill the hole first dug by developers!

I am speculating, as I clearly state throughout both posts. The gap between covers on two maturities, cover size on 5 year paper and spreads tell me something extraordinary has happened in the auction for 5 year bonds. I am not a specialist on ECB legal matters, so cannot really comment on this... but... they have been 'creative' during the crisis. Recall, Taylor rules are also not allowed for ECB, yet we are clearly not in a pure inflation targeting environment.

The Chinese are said to be moving into EZ bonds.

Why not, where else could they get that rate of return? On so many investments?