As promised in the previous post (which focused on the Exchequer balance, here), the present post will be focusing on actual tax receipts.

I have resisted for some time the idea that Budget 2010 targets are somehow analytically important. Hence, you will not find targets-linked analysis here. But the main tax heads - their comparative dynamics over 2008-2010 to date are below.

First, take a look at the actual cumulative to date levels. 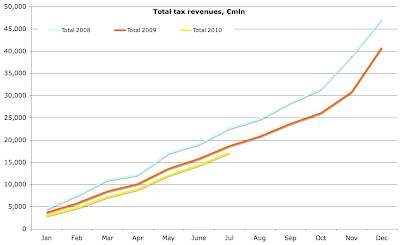 Two largest contributors to the receipts are Vat and Income Tax: 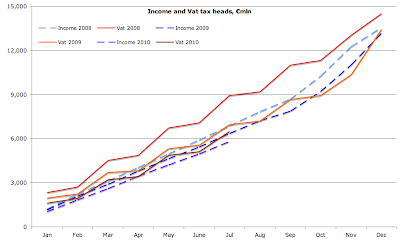 Corporate tax and Excise are the next largest categories. 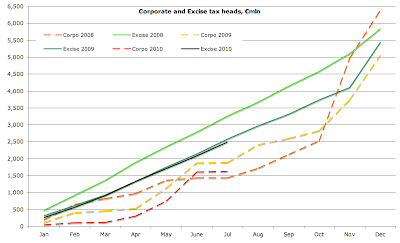 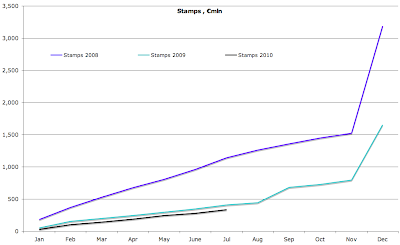 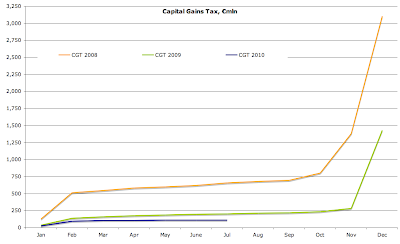 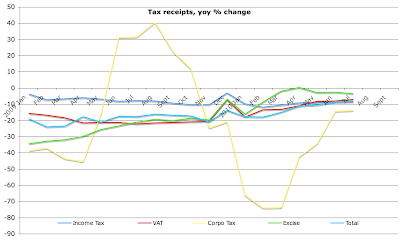 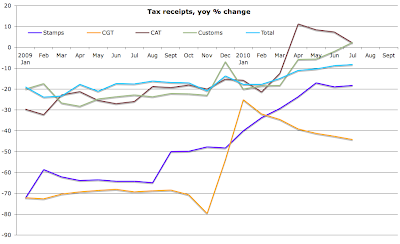 Usually, the Exchequer returns publications now days provoke a roaring applause from our banks and other 'independent' analysts and the remarks about 'turning a corner'. This time - no difference. Nope, folks - let me stress - there is not even a stabilization around horrific results for 2009. Exchequer revenues are heading south. We haven't gotten anywhere close to resolving the crisis.

But let me show you what this bottom will look like, once we are there. 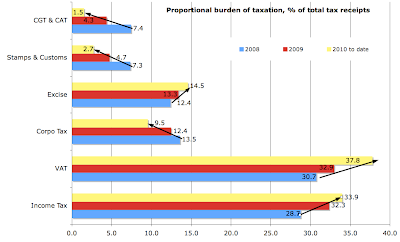 In other words, those who benefit less of all demographic and economic groups, from public services - the upper middle classes - are now paying more than 50% of the total tax receipts bill. This, in the words of some of our illustrious guardians of social justice is called 'protecting the poor'. In other times, in other lands, it was also called 'taxation without representation'.

I would rather call it a tax on human capital - the very core input into 'knowledge economy' that we need to get us out of the long term economic depression.
Posted by TrueEconomics at 8:46 PM

This all looks a little hooky. Like you I did a quick run through the figures but all our numbers are different!

TrueEconomics said...
This comment has been removed by the author.
August 04, 2010

But the upper middle class are in Ireland mostly the civil servants and employees of multinationals lured here, so their mobility is somewhat limited. Sorry Constantin, you'll have to move if you want to keep more of that salary.

Yes, Chris, I know. Negative equity is holding people like me back from moving.