Exchequer figures for July 2010 are out. Here are trends and some details. Analysis of revenue (by line) will follow later tonight. 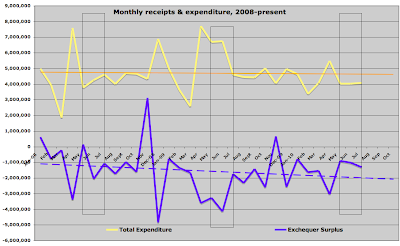 Notice seasonality. Seasonally adjusted surplus/deficit is not replicating the V-patterned change over three months. Instead, we are showing persistent worsening of the deficit. This is not due to a surprise expenditure deterioration, as current expenditure side held quite well relative to 2008 (down from €27,565mln to €27,039mln).

One interesting feature, however, on expenditure side is that May-July 2010 saw a net rise in overall expenditure, while same period in 2009 saw a contraction.

Convergence of tax and total receipts was in line with previous years: 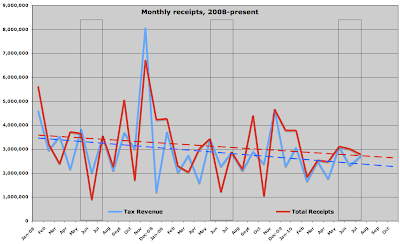 This was achieved primarily by relative under-performance of tax revenues, down from €18,689mln in same period of 2009 to €17,153mln this year, plus slowdown in capital receipts mom (although still up yoy cumulatively). Automatic stabilizers are now in action. 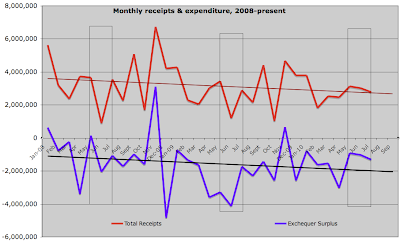 Total receipts are persistently down in the last 3 months, and with them, exchequer deficit is rising. This again runs counter to the seasonal trends. Notice also that mean reversion on receipts side is now completed, while deficits are trending still above the long term trend line, primarily due to the fact that 2009 figure includes banks recapitalization costs, but 2010 figures so far do not account for these in full (more on this below). 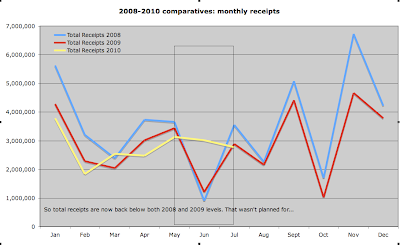 The broken seasonality pattern on receipts side is evident in the chart above.

On to cumulative results for the year: 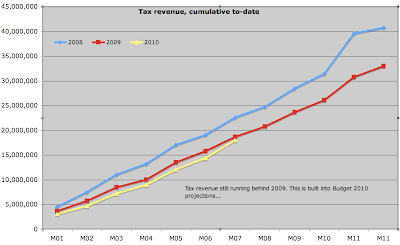 Tax revenue is significantly under-performing 2009, let alone 2008. Remember, with all tax increases on 2009 we should have been somewhere between the red and blue lines. Is this suggesting that higher taxes (certainly on the books for Budget 2011) might be counterproductive to revenue objectives? 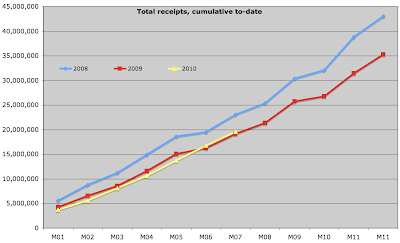 Total receipts are still coming out slightly above 2009 - thanks to stronger performance in June. 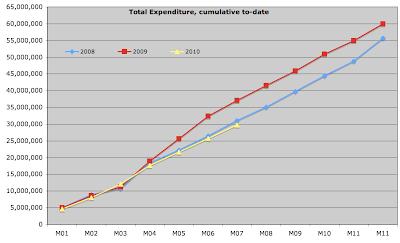 Total cumulative expenditure is running below 2008 levels. That's thanks to cuts in capital spending and under-provisioning for banks in year to date 2010 (more on this below). 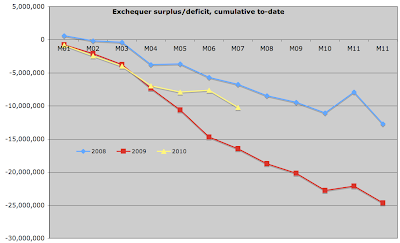 For a moment there, it looked like we were heading toward abysmal 2008 levels (but not as abysmal as 2009). That's because the Government booked all its capital spending savings into April-June. With these savings now exhausted, our deficit has taken a nose dive.

Shall we compare with banks in across the board? 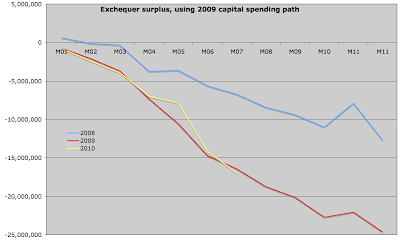 Hmmm... were capital expenditures (inc banks supports) through 2010 so far running at 2009 levels, we would be worse off in terms of spending than last year.

Now, remember, we (well, actually IMF) were promised by the DofF that the bank recapitalization funds since January 2010 "are now reflected in deficit projections for the year". Actually - they are not. Not 6 in the Exchequer Statement details what is covered in banks recapitalization to date: 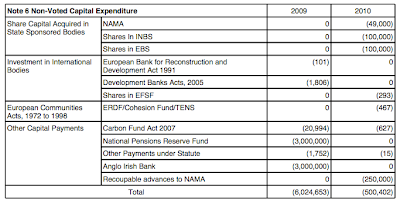 So in brief - no actual capital injection of any variety is covered in Exchequer data. No purchases of equity in AIB and BofI are covered either. It looks like the Government might be waiting to push these numbers through at the last minute, say forcing recognition into December 2010. Such a move would allow it to pre-borrow funding from the markets without anyone raising too much fuss about contagion from banks balance sheets to the sovereign. Once 2011 arrives, the Government can turn to the markets and say 'Well, that was one-off stuff. Business as normal now."

One way or the other - look at the 2009 figure in the table above: that's the benchmark for our real performance.
Posted by TrueEconomics at 5:12 PM

In relation to your final paragraph regarding AIB and BOI. These figures will not show up in the exchequer statements for a couple of reasons

1) They have been funded from the National Pension Reserve, hence the 3bn frontloading in 2009. Also why we don't see the 542m received from BOI in relation to the redemption of warrants and arrangement fees in exchequer figures.

2) Equity purchases in AIB and BOI have been funded either by issue of equity by the banks in compensation for preference coupon or by the conversion of preference stock into ordinary stock. No additional funding has arisen beyond the 7bn invested by NPRF to date.