Per report by RTE today (here), our Minister for Agriculture Brendan Smith said that Ireland's agri-food sector "is making a colossal contribution to economic recovery". The Minister was speaking at the Tullamore Show in Co Offaly.

I am impressed. Of course, agri-food sector is a relatively undefined (by CSO core national accounts statistics - it doesn't even exist) sector, so Minister's claims cannot be fully tested. You see, they belong to that great category of assertions that are non-falsifiable.

But we can take a look at Minister's direct sector of charge - Agriculture. Here are few charts based on latest data from the Quarterly National Accounts and National Income and Expenditure Annual Results for 2009.

Let us start with the Agriculture, Forestry & Fishing sector contribution to GDP: 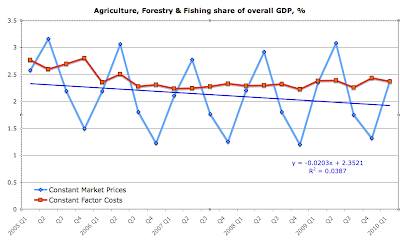 Not exactly spectacular contributions to the national income - AFF sector delivered just 2.38% of national GDP in Q1 2010 - and that was above average performance. All in, the sector output was worth just €995mln. Not a pittance, but when one considers the massive levels of CAP-delivered financial subsidies the sector receives, I wonder what is so 'colossal' in this?

But may be Minister Smith's sector is 'colossal' in terms of its contribution to growth in our economy? 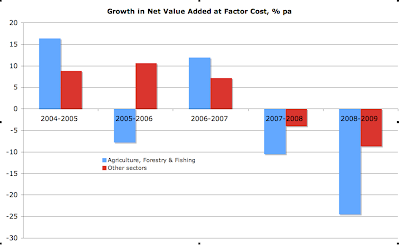 Again, data suggests that, sadly, this is not true either. In 2004-2009 the overall net value added in AFF sector has fallen by 4%. Other sectors experience growth in net value added of 2.5% over the same period. AFF has managed to collect massive load of subsidies over these years. Subsidies to all other sectors have been negligible and actually declined precipitously.

May be the AFF sector provided a relatively stronger shoulder for our floundering economy in 2008-2009? Not really -