Eurozone's leading growth indicator, Eurocoin has fallen once again to 0.37 in August from July already anemic reading of 0.4. This means that my updated forecasts for Euro area growth remain in the range of 0% - 0.26%, with mid-range forecast of 0.20% for Q3 2010. 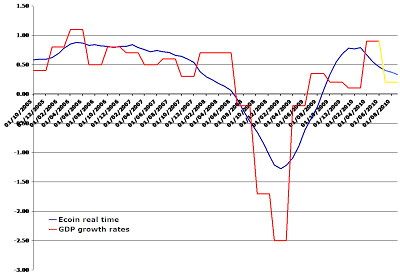 In the mean time, continued pressures on Euro area economies and unbalanced nature of recovery (with Germany powering ahead, while the rest of Europe stagnates or continues to decline) are taking their toll on public confidence in European institutions.

Overall voters confidence in EU has dropped to record lows in most countries according to the Eurobarometer published on August 26th. Just 49% Europeans think that their country's membership of the EU is a "good thing" – lowest in 7 years. Trust in EU institutions has dropped to 42% from 48% recorded in Autumn 2009. Latest survey results are most likely impacted by the survey timing - carried out in May 2010 - at the peak of sovereign debt crisis worries. But it is unlikely that August events would have done much to repair this. PIIGS, plus Cyprus, Lux and Romania lead in terms of declines. Confidence in all PIIGS countries declined 10-18% yoy.


The latest Eurocoin leading indicator reading clearly suggests that unemployment and economic performance will remain leading causes of concerns across the EU (Eurobarometer recorded 48% of EU citizens being primarily concerned with rising unemployment, while economic crisis in general is a cause for concern for 40%). For the first time Eurobarometer also included Iceland, now a candidate for EU accession. Only 19% believe accession will be a good thing for their country and only 29 percent believe their country will benefit from EU membership.

Another interesting result was that when asked what they associate the EU with – most of the respondents said free travel and the euro, followed by peace and, amazingly, "waste of money" (23%). The latter category was led by Austrians (52%), Germans (45%) and Swedes (36%). Just 19% of respondents said the EU stands for democracy, a drop of seven points yoy. Just 10% of respondents in Finland, UK and Latvia identified "democracy" as a principle that is linked to the EU objectives. Romania (33%), Bulgaria (32%) and Cyprus (30%) were the countries with most positive view of the link between democracy and the EU. Overall, in no country did 'democracy' figure as the EU core objective for more than 1/3 of the population.

Support for EU acting as a policeman of financial markets was much stronger. 75% of the respondents said more coordination of economic and financial policies among member states would be effective in fighting economic crisis. 72% back a stronger supervision by the EU of international financial groups (though this majority increased just 4 points since 2009).


Perhaps encouraged by the public support for greater coordination, French and German authorities continue to move in the direction of enhanced harmonization of their tax systems. French budget minister Francois Baroin visited his German counterpart Wolfgang Schaeuble, making an announcement that "Germany is a model which should be a source of inspiration for [France]." Baroin also stated that France "intends to accelerate the harmonisation of both fiscal systems, on corporate as well as personal income taxes". President Sarkozy has requested the French court of auditors to issue a report (due for early findings release at the end of September) looking at areas of fiscal convergence with the German system. The report is due by the end of the year, but a pre-report will be published at the end of September. It is likely that France might move to abolish wealth tax as Germany did back in 1997. Per reports: "in the longer term, Paris is also looking at harmonising Vat, which is higher in France – 19.6% compared to the German 19%" and "capping the EU budget" to give national Governments more opportunities to slash domestic deficits. Mr Schaeuble indicated that Berlin wants consensus on European harmonisation on bank profits taxation - a subject for the next ministerial meeting between the French and German finance ministers in September.
Posted by TrueEconomics at 10:21 AM