Good morning, folks. As a day starter, please take a note: We are bust! Yesterday’s Exchequer returns are a worthy reading on the theme of the day and hence I am writing a third post on the subject. Let me recap where we are at:

Tax receipts are now under €17.2bn cumulative for the first seven months of the year. As far as our ‘ever optimistic’ official analysts go, things are going on swimmingly. But in reality, we are on track to meet my December 2009 forecast for a shortfall of €500-700mln on the year. And that despite the fact that Ireland has ‘turned the corner’ on growth – highlighting the fact that the read through from GDP to tax revenue is not a straight forward thing. Of course, most of the shortfall is due to our real economic activity – as measured by GNP – is still tanking.

So relative to profile, here’s the picture: 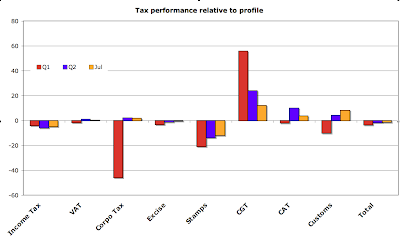 Good news on expenditure – overall voted expenditure was 2.6% below anticipated for the period to July. But this ‘achievement’ was driven solely by the cuts to capital spending. Thus, net voted capital expenditure for the first seven months of the year now stands at €2.2bn – full €660mln (-23%) below target. Net voted current expenditure is so far on target, while national debt is costing us slightly less (-€213mln) than DofF anticipated.

So overall, we are on track to deliver the Exchequer deficit of ca €19bn in 2010, close to the target €18.78bn, as capital spending accelerates in H2 2010. But we won’t reach the overall target to GDP. Most likely, we are going to see a 12% deficit to GDP ratio.

And this does not include the full extent of funding for Anglo and INBS. Brian Lenihan has already committed the state to supply €22bn to Anglo alone, of which €14.2bn was already allocated, but only ca €4bn went on the Exchequer accounts. Of the still outstanding €7.8bn, the question is how much of this amount is going to be directly shouldered by official deficit figures. The second question is – will €22bn cover Anglo demand for capital post Nama Tranches II and III transfers – recall that Anglo is yet to move loans for Tranche II. The third question now relates to AIB – given its interim result announced yesterday, one has to wonder if the bank will need more capital. What is beyond question now is that the State will be standing buy with a cheque book ready, should AIB ask for cash.

All in, Ireland Inc’s sovereign accounts this year are likely to come out with a 20% plus deficit relative to GDP. That’s a massive number implying that over a quarter of domestic economy will be accounted for by the shortfall in public finances. Our debt can easily reach over 87% of GDP and close to 110% of GNP (and that’s just including the full Anglo amount of €22bn and excluding Nama and the rest of recapitalizations liabilities).

Scary thought. But don’t worry – the Government will come out to say that it was all due to one-off measures. One-off in 2008, 2009, 2010, and one can rationally expect 2011 and even possibly 2012. By which time Nama liabilities will begin to unwind… serializing the one-offs into the future.
Posted by TrueEconomics at 8:15 AM

"standing buy" with a cheque book ready, should AIB ask for cash.

Should be "standing by"

Yet what happens when the deficit is addressed?

Taxes must rise. This may mean that "one off situations" may be believed?

When will they address the deficit? 2020? Be good for hindsight?

Constantin,
Excellent reading on your blog. You should put an audio version at the end of every post. It means we can listen whilst working.Soundcloud is easy to use and embeds in blogger. soundcloud.com lets know if you need help. Daithi, liveIreland.com.

I'm curious about your graph though. I cannot help noticing that the income tax falls are smallish compared to the huge drop in corporation tax. Can I make a wild guess that the latter fall is due to a combination of a collapse in profitability amongst existing businesses as well as the impact of multinational withdrawals (a lot of small global offices based in Ireland are quietly shutting up shop), or are there other factors? For example companies that were domiciling profits to Ireland for tax purposes going elsewhere? (More favourable tax rates or impact of increasing regulation to prevent this kind of global tax evasion?)

Similarly, there is a huge rise in CGT. What is going on here? That is presumably on the sale of assets such as shares etc?

Constantin, just curious, you state that more than a quarter of the economy is due to our deficit spending. I'm curious how you came to this figure, I'm assuming that you treated government spending in a simple keynesian manner and applied a government spending modifier of 1.25 or so. I wonder what a reduction in civil service salaries to EU levels would do, is the excess money pumped into the economy going on property, into the domestic economy or being exported?

Excellent analysis. Any idea how we get out of this, other than a nice healthy default?