Core conclusions: "the rebound in the Irish manufacturing sector lost momentum again in July.
Both output and new business increased at slower rates, while employment fell for the second month running. Reduced capacity at suppliers led to the fastest lengthening of lead times in the history of the series. The seasonally adjusted NCB Purchasing Managers’ Index™ ...fell for the second month running, posting 51.4 in July, down from 51.8 in the previous month.

The reading indicated that although operating conditions in the sector improved, the rate of strengthening was the weakest in the current five month sequence. Output growth eased for the third successive month..."

Overall - a very balanced analytical note from NCB, as usual. Worth a close read.

As usual, let me update my charts based on the NCB dataset. 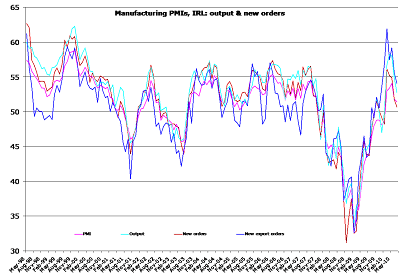 The downward pressure is clearly visible in all three PMI-underlying core series. A close up snapshot reveals it in more details: 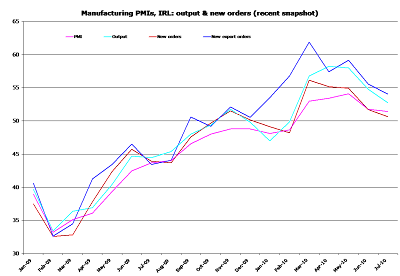 Output and new export orders series are perhaps the most significant signals of the weaknesses ahead.

Much of the improvements in PMIs globally (and in Ireland) were driven earlier this year by the need to restore supply capacities: 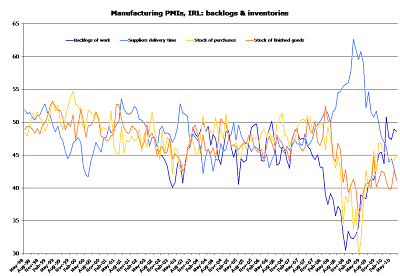 This momentum now appears to be close to exhaustion despite the fact that slack capacity remains unfilled. 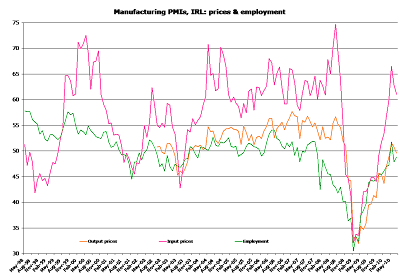 Prices are showing continued deterioration in margins. Overall input prices deviation from the output prices and the recent crossing of output prices into contraction zone for the index suggest that margins are being significantly undermined. The uptick in employment index, though significant since the crisis lows, is yet to translate into new hires and is now back in contraction territory (since June).

Next, updating Service PMIs (note - the latest data is for June 2010). 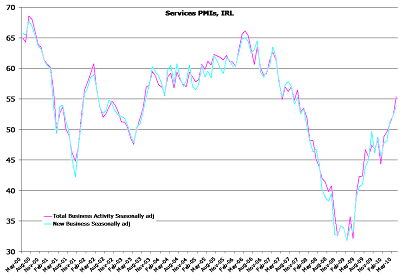 Services are posting much more sustainable recovery trend (albeit with less impressive peak of growth so far) than manufacturing. New business trending alongside overall PMIs suggests that unlike the case of inventories-driven manufacturing PMIs expansion, new business is driving most of the service activity rebound. The snapshot of data below highlights this: 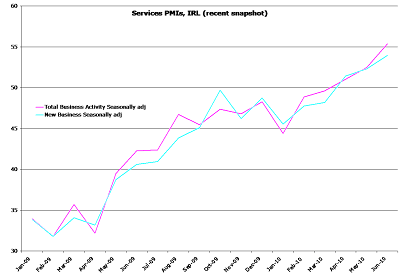 However, it is worth watching some of the macro sub-components of the services PMIs: 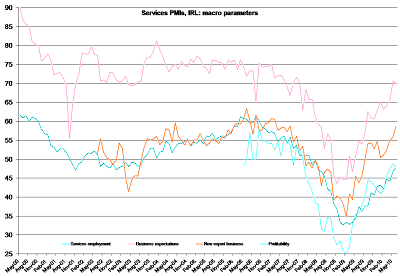 In particular, both business expectations and profitability are appearing to be on cusp of a shift downward. More importantly, both profitability and employment appear to be stuck in contraction territory. 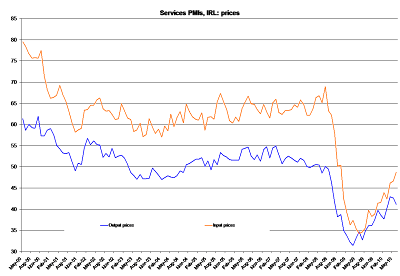 In terms of prices, inputs deflation is almost exhausted, but outputs are stubbornly refusing to move into higher prices territory - margins are thus down, which should be bad news for employment in months ahead.

Employment picture overall is not too encouraging: 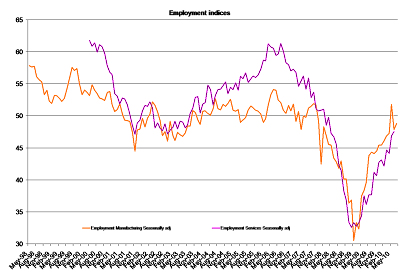 Original support at modest expansion levels in manufacturing, registered earlier this year has now slipped back into contraction. Services employment remains below expansion line, though the rate of contraction is slowing pretty aggressively. It remains to be seen, however, what July data will tell us about services component.
Posted by TrueEconomics at 11:35 AM

This as usual is brilliant and on the mark but it's missing the vast bulk of the people. You need to be talking the peoples language. Relate this back to "Pot-Hole Politics".
Please Dr Gurgiev. Lorcan has said it already about you being too far from the parish pump and you saw how Dan Boyle got personal. You and David McW are what's left to speak out and expose the lie. If I can help, I will but please try to get your truth to a wider audience. Good man and Nostrovya. (Sorry about the spelling)
Joe Larkin
087-1440080