And so the Greek saga continues, with yesterday’s announcement that the EU has a worked-out rescue package for the country now turning out to be yet another wishful thinking piece of poorly prepared PR. No package details, and the markets are not impressed.

But forget Greece for a moment. The good news is that just as in Autumn 2008, the last couple of months have been the case of “bad news = good news”. The markets have finally started to turn their attention to the completely reckless ways in which majority of Governments around the world have been managing their finances, both before the crisis and during it.

The new line of fire is now directed at Turkey and Japan.

Japan, pushing for well over 200% of GDP ratio of debt is in a league of its own. And the current Government is hell-bent on raising the debt limits higher with aggressive spending targets and Napoleonic plans for shifting even more public expenditure into largely unproductive investment (for a country with already extensive public capital stock, the diminishing marginal returns on new public investment have set in some time ago). Debt ratio to working age population is now well above USD100,000 and is rising at accelerating pace. Savings rate has fallen to below 4% while the fiscal deficits are now much higher than they were back in the days when the savings rate was around 18%. Current account balance has declined from the peak of 5% in 2007 to under 1.5% today and is set to fall further. With these dynamics in mind, Japan is going to account for roughly 11% of the total global expected issuance of new bonds in 2010.

Turkey is a serious basket case, although it might not appear to be such from the simple debt levels comparisons. Like Ireland, Turkey has low debt to GDP ratio (45% as opposed to Greece with 113%, Portugal with 77%, Spain with 54%), It is in line with Ireland current 46.2% debt levels (although in Ireland’s case, a GNP base would work much better, bringing out true public debt to a much more formidable 57% of GNP). But it is not the level of debt that is worrisome. The awesome rate of debt increase, along with hidden debts that the public sector underwrites are the real concerns here. 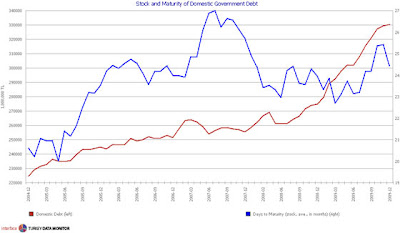 shows just how bad Turkish debt dynamics are. In the environment where it is currently yielding over 8% with an average maturity being around 2 years, the problem for Turkey is the following:
Now, think of it this way – Turkey debt is held by domestic banks (roughly 60%) and the remainder – by foreigners. This, normally, presents the point of stability. Alas, if the banks are not operating in the liquidity saturated markets for funding (and they are clearly not doing so) the Turkish Government cannot default on the debt without risking destabilizing its banking system. And if it does destabilize the banks, the Government ‘solution’ to default will imply demand for massive banks rescue package, adding further to the debt mountain. In other words, unlike with other countries that have heavier exposures to international lenders, Turkey simply must refinance the roll-over debt.

So dynamics matter. And they matter for Ireland. Which got me thinking – just how bad is our debt position going to get and what costs will this impose on the economy. Here are few charts: 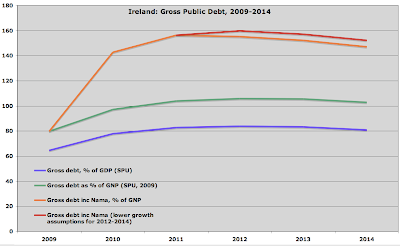 Start with gross debt as percentage of GDP and GNP. Above chart shows figures for the official debt estimates from Stability Plan Update, December 2009, issued by the Department of Finance. Additional lines show the ratio of debt to GNP and also extension of debt figures to include Nama's €59 billion allocation, plus expected €12 billion in post-Nama capital injections into the banks. Finally, the last line shows the above, accounting for a lower growth rate in GNP scenario than the one forecast by the DofF for 2012-2014 period. The important issue here is that our debt to GNP (the real measure of our economy) is going to breach 100% even under DofF own rosy assumptions.

Next, consider the growth rate in our debt: 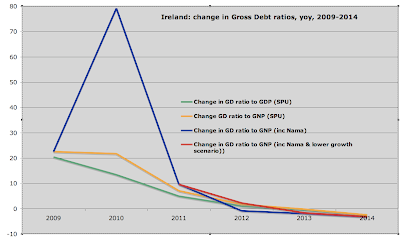 So expect no respite in terms of the cost of debt financing in sight: 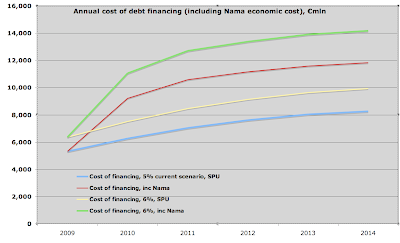 The above are pretty big annual numbers - up to €14 billion going to feed the debt monster annually! Crazy stuff for an economy worth around €130 billion in terms of its GNP. Alternatively, €14 billion is roughly 30% of the total Government expenditure that this country can afford if we were to stay on structurally balanced fiscal path! 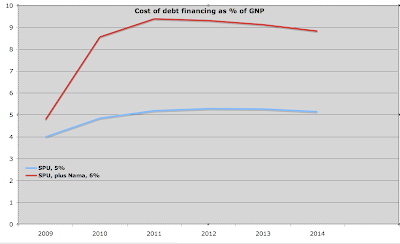 And thus, cost of debt financing as percentage of our economy is going to be excruciating - up to 9.5% of the annual economic output at the peak (under the most pessimistic scenario). Which means the total cost of the current fiscal crisis is also going to be astronomical: 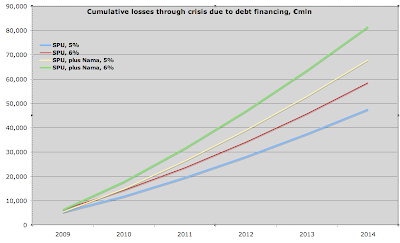 By the end of 2014, thus, we are looking to have wasted between €50 billion and €80 billion in total on sustaining that which is simply unsustainable - our gargantuan public sector overspending.


Incidentally, this pretty much explains why I do not believe that marginal reforms of the public sector, such as 'productivity improvements', 'reduced spending on external consultants' and 'staff re-allocations' will be enough to address the issue. In real world we inhabit, we need a massive cut in terms of overall spending on public sector and this can only be achieved by slashing numbers employed in the public sector and cutting pensions and wage expenditure on the remaining staff.


PS 1: given chronic lack of skills, aptitude and capabilities present in many areas of the public sector, an idea of using internal expertise to reduce reliance on external consultants advice and expertise, while hoping for improved efficiency is simply absurd.

In response to the article, we were told by the Irish officials that 'total debts do not matter, only public debt does'.

In the real world, total debts of economy do matter because they show structural composition of economy itself, revealing the extent to which economic growth is being financed by reckless borrowing.

This month, Hayman Advisors weighted in on our side: 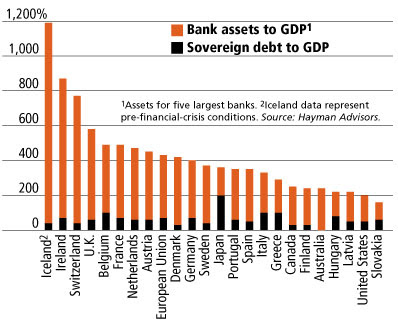 The above debts cover public debt, plus 5 top banks per country, with Iceland figure showing pre-crisis conditions. Forbes magazine reproduced this chart in their cover story for February 8 edition with a tag line saying "It's the Total Debt, Stupid".

Posted by TrueEconomics at 5:41 PM