So we've turned the corner... err... our economy it is... only to discover that, behind that corner the same tumbleweeds keep on rolling across the Exchequer accounts.

It was worth a wait, folks, and January figures for Exchequer returns have shown that, as predicted, the deterioration in our public finances will continue despite Minister Lenihan's efforts in the Budget 2010.

A chart is worth a thousand words: 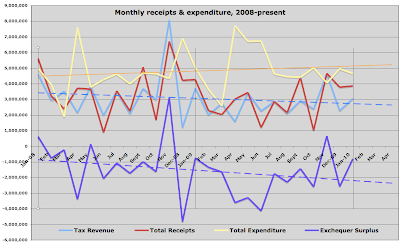 Tax receipts down on January 2009 by almost 18%. They were down 19% in January 2009 relative to January 2008. Spending, meanwhile, is down 7.5% on January 2009, but... there's always 'but': current expenditure is down by a much lower 5.59% and the slack is picked up by a whooping 21.1% decline in voted capital expenditure (the stuff that is supposed to provide stimulus to our economy through strong public investment programmes). 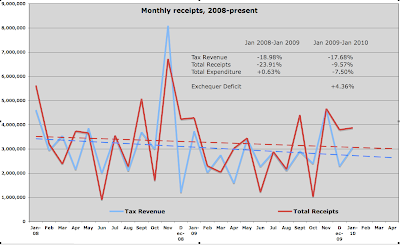 Check out monthly receipts above and spot the odd on - right, there has been an extraordinary increase of ca 50% (or 250 million) in January 2010 capital receipts. This, of course, is thanks to a massive hold-back on public investment programme in 2009.

Receipts side is clearly gone into a deep red - all, without an exception - lines of tax revenue have underperformed January 2009. Corporate tax has decreased to a third. Stamps - already miserable performer in 2009 are now 41% down on that. Capital gains also sunk by almost a quarter. Income tax, down a massive 9.72% is the best performer. This is dire, folks!

But expenditure side is also showing some poor performance:

Ok, I understand Social Welfare spending increasing 15.76% yoy, but agriculture? ETE is a mixed bag. But, get your thinking going. We are in a recession and in a third year of a fiscal crisis. Over the last two years, we have managed to reduce our spending by a miserable 6.9% or less than 3.4% annualized savings. And that was achieved with a Draconian Budget 2010. what will it take to cut our spending by 25-30% off the peak levels consistent with a structurally balanced budget? 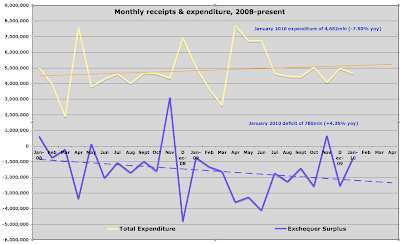 But here is a different way of looking at the expenditure side: 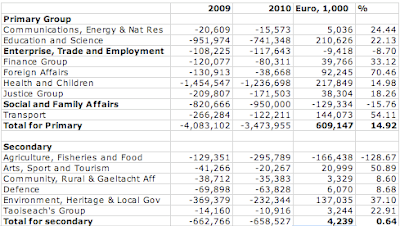 Take the entire set of departments and divide them broadly speaking into primary (vital, if you want) and secondary (supportive) in terms of their roles. Guess which group has manged to achieve greater savings (in percentage terms) out of its budget?

Efficiently run Government would require the secondary set of departments to cut by at least 3-4 times the rate of cuts in the essential departments. Under the above, we'd have cuts of up to 60% in the total spending segment of €660million, or effective savings of €392 million more than has been achieved in one month, or roughly €1.8-2 billion in one year.

Not enough to decrease our massive deficit, but...
Posted by TrueEconomics at 9:12 PM