"The best course would be to follow Ireland, Hungary and Latvia with a credible fiscal plan heavy on spending cuts that government can control, rather than tax hikes and loophole closures that depend on historically weak compliance. ...This approach is working in Ireland – spreads exploded as public debt ballooned to save its banks, but came back in as public spending was cut by 20 per cent."

Really? We haven't noticed. And neither did the Department of Finance.

Second, there has been no net reduction in public expenditure in Ireland since 2008. None, folks. Let's face the music performed for us by the Department for Finance. No spin from me. In its "Ireland – Stability Programme Update, December 2009" available to all (including Professor Roubini here) DofF provide some stats. 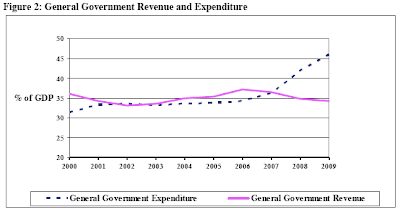 Clearly, no sign of decreasing expenditure in sight. Of course there are many reasons for this, but hey, where's that 20% cut? Or 1% cut? None through 2009.

But may be Prof Roubini is talking about future cuts of 20%? Ok, page 20 shows future expected expenditure figures per Budget 2010.

So clearly, neither Gross, nor Net current expenditure are set to fall from 2009 through 2014. Not on a single occasion.

Oh, yes, while Anglo Irish Bank transfers in 2009 (to the tune of €4 billion) enter the DofF estimates for General Government Balance, there are no provisions for the same anywhere in DofF projections for 2010 (see Table 1c, page 38). So pencil that in and you have No Reduction in Deficit in 2010! In fact, with banks supports still required, 2010 is likely to see an increase in deficits.

Take a look for yourselves: 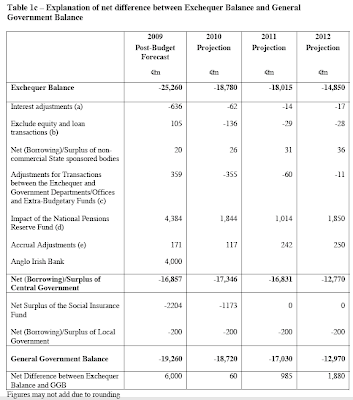 Notice that pesky number on borrowing requirement rising in 2010 on 2009? If Prof Roubini is correct, why would the Government that managed to cut its spending by 20% increase its borrowing by 3%? Unless the revenue side is expected to fall by more than 20%! But no, DofF expects total tax revenue to decline by 4.7% in 2010 (Table 1b, page 37).

Finally, Table 1d on page 40 shows that spending adjustments per Budget 2010 amount to the net of €-4,051,059. Of course, since then we have learned that some of the cuts will not be implemented, reducing this number to some €3.3 billion. But even at a higher level, estimated by the DofF, the adjustments add up to only 8.55% of the Net Voted Total Expenditure, or 6.42% of the Gross Total Expenditure in 2009.

Hmmmm... someone has been fooled by the PR machine statements coming out of Dublin.
Posted by TrueEconomics at 11:45 AM

Ireland until only recently, was not included in the list of Eurozone countries on Roubinis Global Economics Site. It's there now however.