So we keep hearing how the entire world is applauding the Irish Government for doing "the right thing" (as Minister Eamon Ryan asserted today on Prime Time). Hmmm... I guess IMF isn't amongst the 'entire world' set.

"For most advanced economies, including the very largest ones, fiscal stimulus vis-à-vis 2008 levels will be broadly maintained in 2010.

Among G-20 advanced economies, only Canada and France are expected to start a significant adjustment—on the order of ½ and 1 percentage point of GDP in 2010, respectively, in terms of their structural balance.

Larger reversal of stimulus is expected in Spain, and especially in Iceland and Ireland, but from very high structural deficit levels in 2009."

This doesn't sound like an endorsement, just a clinical admission of the fact, but... notice the words 'reversal of stimulus'. This really implies that the IMF is treating our cuts imposed in the Budgets 2009, 2009-bis and 2010 as being largely cyclical (consistent with a reduction in a temporary stimulus).

Of course, the IMF - as well as any reasonably literate macroeconomist - would like to see Irish government (and other governments as well) cutting structural deficits, not cyclical. And the IMF makes this point by stating:

"Few G-20 advanced economies have so far developed full-fledged medium-term fiscal adjustment strategies, although some have announced medium-term targets or have extended the horizon of their fiscal projections.

A notable development is the adoption by Germany’s parliament, in June 2009, of a new constitutional fiscal rule for both federal and state governments that envisages a gradual move to (close to) structural balance from 2011. The rule requires the federal government’s structural deficit not to exceed 0.35 percent of GDP from 2016. States are required to run structurally balanced budgets from 2020."

Might it be the case the IMF views our cuts as being at risk of turning out to be short-lived? It might.

Another interesting feature of the report is the following statement (which comes right after the Fund saying that it expects the governments to start lifting banks guarantees since funding conditions have been easing):
"Deposit insurance schemes have not undergone any significant modifications since their expansion at the beginning of the crisis. The average duration of schemes is about three years. Since June 2009, New Zealand and the United States (for transaction accounts) adopted changes and extensions to their programs, including a rise in participation fees to better reflect market prices and risks."

Now, give it a thought: the Government has extended banks guarantee, but cut the deposits guarantee - exactly the opposite of what other governments are doing. Another uniquely Irish way of 'doing the right things' for the banks and taxpayers?

Doubting? Take IMF's data for the extent of support we have given the banks to date: 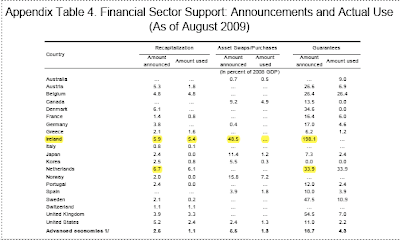 Do remember - the above figures for Ireland do not include the full exposure due to Nama and the latest stakes-taking exercises the Government is engaging in with BofI and will be engaging in with AIB in three months time. Notice just how massive is our exposure relative to GDP when compared to two other crisis-stricken countries - Denmark and the Netherlands. Also notice just how much more aggressive these countries are in writing down their banking systems' bad debts? In fact, not a single country comes close to us in terms of engaging in bad assets purchases from the banks. Why? They do not believe in the 'long term economic value' that Nama is based on?

Another interesting table from the paper:

This, of course, shows that majority of countries out there are completing their programmes for stabilisation of the banking sectors in 2010-2011 period. Ireland is not at the races here. Unlike majority of our counterparts, we are bent on dragging out Nama through some 15 years worth of the zombie banking, zombie development and zombie economy - Japan-style. Except, unlike Japan, we have young population.
Posted by TrueEconomics at 11:06 PM

Yes, Paul, but numbers do not lie - it is really shocking to watch reality of our economy on the ground departing from the rhetoric of our leaders to the extent it does... especially knowing that they too have access to this data! Ignorance might not be an excuse for wrong actions, but they cannot claim even ignorance as their mitigating circumstances.