CSO published its analysis of the Live Register Data for 2009 which shows some interesting details.

Per CSO data, reproduced below, the highest risk of unemployment by sector was found in:

All state-dependent or provided jobs were the safest ones (see above marked in blue bold).

Update: since both Health and Education sectors are heavily reliant on public sector workers, we can consider a broader definition of the Public Sector to include the above sectors together with Public Administration & Defense. In this case, broader PS accounted for 23.1% of total employment in Q4 2008 and 6.9% of total number of new LR signees in Q1 2009, implying a 29.9% relative incidence of unemployment by sector - a number that is more than 3 times smaller than the average for the entire economy.

The above relative incidence number for the broader PS is actually biased in the direction of overstating the overall incidence of unemployment in the PS, as a number of employees who lost their jobs in Health and Education sectors were most likely from private firms providing these services. 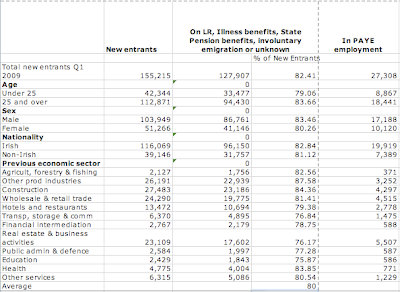 Notice couple of things here - virtually the same number of foreigners and Irish who have joined LR in Q1 2009 stayed in some sort of 'Unemployment' by the end of Q2 2009. Actually, this percentage was slightly higher for the Irish LR signees, but the difference does not appear to be statistically significant.

Those over age 25 tended to remain on LR with higher probability than those who are under 25. The trick part here is that many under 25-year olds went off to training and education, dropping off the LR. One hopes they will have a job to go to, once their Fas-run courses and college programmes end.

Males were more likely to remain broadly unemployed (83.46%) than females (80.26%) but the difference is small and there are several factors here. One might wonder how the birth rate increase affects this number and also how it depends on transition to single parent family supplement. Also, younger women are more likely to undertake new training and education than younger males. Can these three factors explain the difference between men and women in re-employment rates?

Once we look at differences across sectors, one striking detail shown in the table above is that sectors with higher wages and better jobs are suffering the largest non-returns to jobs by the Live Register Signees. Table below details: 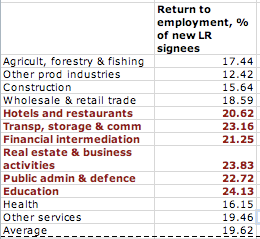 So in the nutshell - the jobs our LR signees are getting after they lose their primary occupation are of poorer quality and in less productive sectors.
Posted by TrueEconomics at 7:58 PM

Looking at those figures, wouldnt it be true to say that if you aggregated all of the public sector jobs that have been lost - inlcuidng those among non-specific categories like 'others', the total no of public sector jobs lost is much higher than you suggest?

It is quite possible, Miriam, and I should do the maths on this - good suggestion.

However, the problem is that these jobs are not what I would usually call "Public Sector" jobs - these are temporary positions, part-time etc. Sadly, our Public Sector, especially in Education, relies heavily on achieving productivity by hiring people outside its own normal contractual arrangements. These temps and part-timers are often tasked with performing core duties, but are being paid less and have no security of tenure, granted to the full-time / full-benefits employees.

I would prefer to classify these people as contractors to the Public Sector.

In many cases, signees onto LR from the Public Sector are also workers on termed contracts, which were simply not renewed. Some non-renewals are likely to be due to the termed nature of work (project completion) and thus could not be expected to continue into the future, unless public sector was growing at significant rates in terms of new expenditure.

This category of new signees is similar in nature to what I perceive to be a group at risk in the future, when large numbers of new PhDs currently in "employment" as post-docs on state and EU grants run out of their contracts.

Also, Miriam, we do not know how many of the new signees in Education and Health sector were from public sector side and how many were from private sector companies operating in these sectors. It is not a straight forward exercise of just taking the share of each sector that is supplied by private contractors and companies and applying it to the numbers of signees from these sectors. The reason is that there is certainly a bias which implies that private sector workers operating in health and education are more likely to be laid off than their public sector counterparts.