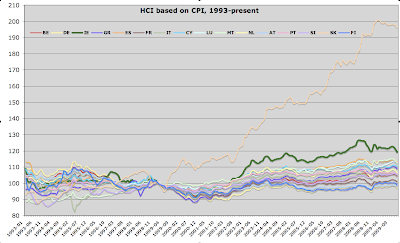 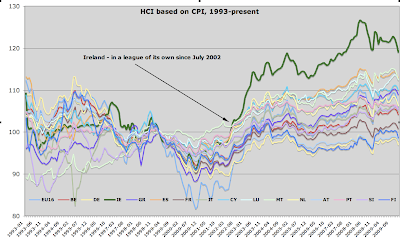 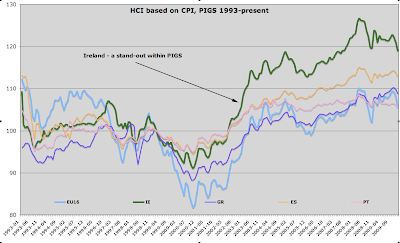 Despite massive deflation, compared to the rest of Euro area, Irish economy has managed to record only a small improvement in HCI (CPI) of 1.57%, while the Euro area recorded an improvement of 2.22%.

Charts 4 and 5 show the latest data for harmonized competitiveness indicator based on GDP deflator. 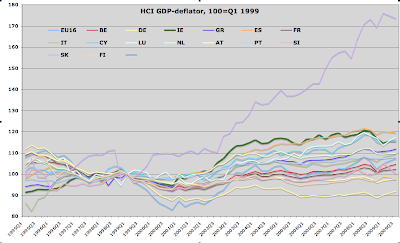 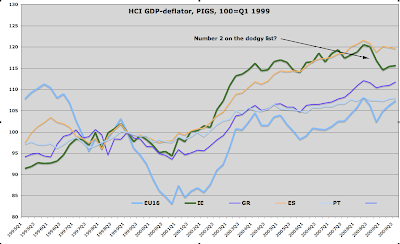 Once again we are not in a very good club, folks. And another worrying thing – we are not at the competitiveness gains game anymore either. Table below illustrates

After Q1 2009, we stopped gaining in quarterly change in competitiveness and instead moved into positive territory – signaling deterioration in competitiveness. Net positive – we did so at a slower pace than the Euro area as a whole. But does this help much, when you consider that we are the third sickest economy by this measure in EU16 after Luxembourg and Spain?

So, ok, may be labour costs adjusted for productivity help us in our quest for competitiveness. After all, we do have pharma and medical devices sector here that is performing miracles when it comes to transfer pricing-backed growth in output per worker? And the two sectors weathered the storm of the crisis pretty well so far. 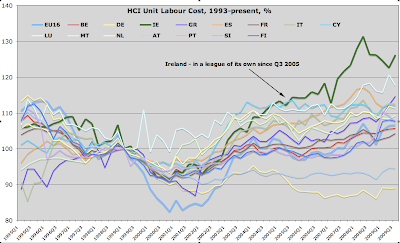 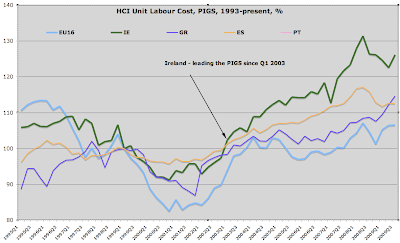 Not really. Harmonized competitiveness index based on unit labour costs also shows us to be the weakest point in the Euro-land chain. And it also shows that in Q3 we have gone into reverse when it comes to gaining competitiveness. We are now pulling away (once again) from the Euro area average.

All of this is instructive – for all the robust talk about Ireland gaining in competitiveness, restoring our advantageous relative position compared to EU counterparts, real data shows we are now getting economically-speaking sicker, not healthier… Time to start thinking about changing our policies, anyone?
Posted by TrueEconomics at 9:03 AM

Competitiveness is more than about being 'cheap'. It's about being productive and - outside the drive-by messages they get from power point presentations made by those who are supposedly 'leading our industrial strategy' - Ireland's policy-makers never even encounter the concept - let alone internalise and understand it. In fact their political careers exist to protect vested interests or block productivity. Their main contribution to date has been NAMA - or tying an anvil to the leg of a drowning man and dropping it in the sea.

Yes, Paul, but numbers do not lie - it is really shocking to watch reality of our economy on the ground departing from the rhetoric of our leaders to the extent it does... especially knowing that they too have access to this data! Ignorance might not be an excuse for wrong actions, but they cannot claim even ignorance as their mitigating circumstances.

"They took away the gold that was in the Bank of Greece, and they never gave it back. They shouldn't complain so much about stealing and not being very specific about economic dealings,"