In a rare piece of good news VIX index measuring (albeit imperfectly) revealed risk assessments in the US markets, has fallen below 40 on the final trading day of the year, for the first time since October 1. The VIX is the Chicago Board Options Exchange Volatility Index shows the market's expectations for volatility over a 30-day period.

As my students in Investment Theory course would know, only human imagination is a limit to the number of ways one can think about (and depict) market volatility. Here are three simple (my favourite criteria for empirical validity) ways of doing this.

Chart 1 plots VIX data since January 1990. This shows a dramatic fall in VIX reading since November highs. But, it also shows the cyclicality of VIX – an approximate 3:5:3 cycle of 3 years rising volatility trend, followed by 4-5 years of elevated ‘flat’ trend, concluding with a 3 years of falling trend. By this pattern, we are not out of the woods. Indeed, we have just finished the 3-year rising trend bit around mid 2008, implying that a long-term elevated volatility period may be still ahead for us. 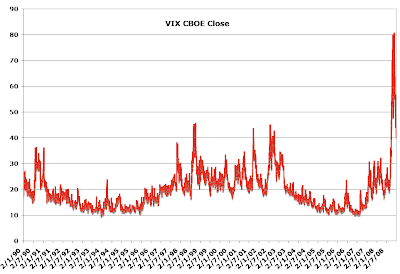 Chart 2 plots intra-day variation in VIX (High-to-Close, alongside the same logic as semi-variance models of risk pricing). Note the unusually elevated red peaks since ca July 2007. This disputes the common claim that it took some time for credit markets troubles (starting in mid-Summer 2007) to feed through into the markets for real claims (assets with fundamental underpinnings). Once again, the latest moderation in VIX reading may be simply concealing the historically high volatilities in risk perceptions that drive daily markets. 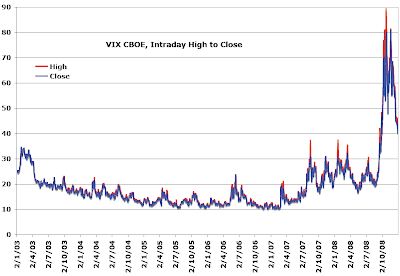 Chart 3 shows three alternative, albeit slightly similar, measures of risk dynamics. Note that up until around mid February 2007, daily deviations in VIX readings measured as ‘High’-to-‘Low’ and ‘High-to-Close’ tracked one another and were roughly in line with the weekly Moving Average in the standard deviation. In other words, while risk itself might have been rising or falling over time, the uncertainty about the future risk levels was much lower and more static prior to the beginning of 2007. 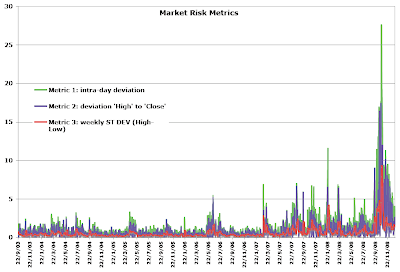 This ‘calm’ was first challenged in February and then finally shattered in late September 2007. Once again, no matter how positive the latest decline in VIX to below 40 may sound, we are not of the woods yet.

Expect:
• More intra-day and intra-week volatility, and
• Less predictability in volatility trend.
2009 seas of financial market are going to be no less choppy than the ‘Perfect Storm’-torn 2008.
Posted by TrueEconomics at 12:14 PM