And so it goes - another weekend, another rushed report. This time around, the boffins in our Department of Finance have decided to give the nation a weekend to digest the infinite wisdom of their outlook for our economy: the Addendum to the Irish Stability Programme Update, January 2009 (link here).

And what a fine read it presents:

"The economic situation is changing rapidly," reveals the report. In case we have not noticed this at the ground level.

"The uncertainty surrounding economic forecasts in the current environment was highlighted in the October Stability Programme Update, and many of the risks identified at the time have subsequently materialised," the report continues. One can only assume they are talking about the risk of a -0.8% economic contraction in 2009, predicted by October edition. Just about the time when a majority of stock brokers and other analysts, including myself, forecast a -3% 2009 growth!

In a nutshell, the update delivers a new forecast for economy to contract by 4% (GDP) and 4.5% (GNP) in real terms in 2009. Mark this space - two-three months from now, justifying new round of tax increases, DofF will cut these to -5%. and -5.5-6% respectively.

"This would also mean a cumulative loss of output of around 6¼ per cent over the period 2008-2010," say our civil service porgnosists. But hold on, GNP contracting 4.5% in 2009 and "positive growth is expected in 2011, with a return to more sustainable growth thereafter."

This implies that 2008 and 2010 contractions in Ireland's real economy will total 1.75% in GNP terms (or 2.25% in GDP terms) net of compounding! Now, that is about as realistic as expecting Michael Dell to outsource all his manufacturing to Waterford Wedgewood.

Outside the planet Civil Service Boffins inhabit - i.e down here on earth - real income contractions are likely to take the following (conservative) route:
Of course, DofF ignores simple compounding rules. Its figures for GDP growth imply a 6.2% compounded contraction (not 6.25%) over 2008-2010, while its GNP forecast yields an 8.2% fall in real income (output) over the same period of time. Where did they get that 6.25% number from?

DofF also ignores the fact that for people living in Ireland, GNP is what we actually produce and what our income relates to, when the transfer pricing by the multinationals is factored out. On this measure, losing 8.2% (DofF forecast) or 10.4% (my guess) of ones income and facing rising tax bills is a bleak prospect.

Here is a quick summary of their outlook (Figure 8):

This is interesting for two reasons:

(1) In mid 2007 I argued in Business & Finance magazine that Ireland will not get close to the potential GDP growth rates of 4% (used by the DofF in their Budget 2008 assumptions) anytime in the near future. I estimated our post-crisis potential GDP growth to be around 2% (and I stick to this estimate).

(2) Notice 'contribution of total factor productivity' growth to potential GDP growth - even after the return of economic growth in 2011. DofF clearly does not foresee our great knowledge economy to contribute more to future growth than the sweat and brawn of pure labour and physical capital. For once, I agree with them. But here is a question - what is then to be made of our Building Ireland's Smart Economy rag published less than a month ago?

Well, let's move on. Here is another interesting piece of news from the Report: 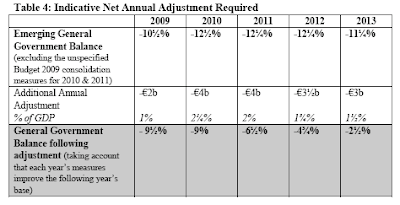 Oh no, I did not make it up - they really are projecting an 9.5% General Government Deficit and that is after factoring in expected Government efforts to "improve the following year's base". I only hope this is not a sign of what our An Board Snip is preparing in cuts. But this does include (Additional Annual Adjustment line, AAA) the cumulative of July-December 2008 demands for spending cuts made by Minister Lenihan. And beyond 2009 it includes DofF wishful thinking that Mr Lenihan will be decisive and tough enough to actually wrestle these savings out of the dead cold hand of our civil service!

Last week the Government claimed that GGD for 2009 will be in the region of 6.5%, although some rumors were circling the media that it might be 'as high as 8%'. Few days later - we have a magic 9.5% number. Either things have gone totally pear-shape within the span of a couple of days, or DofF simply got it so wrong before, that it is now running over its ar*e for the hedge.

My humble view - 9.5% is a lower end estimate even with An Board Snip cuts into public spending factored in. Why? Because this Government has no guts to implement even a meager €440mln cuts demand (see below), let alone a lofty €2bn, so that AAA line is a wishful thinking for 2009, 2010 and 2011.

At this point, only a few, albeit still scary, things are left worth mentioning:

"The Government has set as a priority the elimination of the current budget deficit by 2013, that is to stop borrowing for day-to-day spending, and to bring the General Government deficit to below 3 per cent of GDP in that period." In other words, the Exchequer has no plans to bring its own appetite for our money under control any time soon. Is it 'elimination' of the deficit (in plain English a zero deficit), or is it a deficit below 3%? Such a loose use of the language by the budgetary authority is a sign of a deeply seated lack of confidence amongst our top leadership, including that in the civil service.

"Investment in capital projects to enhance Ireland’s productive capacity has been retained at a very high level, of the order of 5 per cent of GNP... given the extraordinary economic and financial circumstances impacting on all countries, including Ireland, this level of investment, which is now being totally funded from borrowings, will provide a significant fiscal stimulus in these difficult times." In other words, don't bet on any real fiscal stimulus - after all, recall that this 5% of GNP (not GDP) package is the same one we had since the passage of NDP two years ago! There is nothing new, nothing innovative, nothing more effective than offering a standard investment plan pre-announced two years before as a workhorse of the crisis resolution package!

"The Government took firm and immediate action on expenditure in mid-2008 to address the emerging spending pressures, securing some €440 million in savings in 2008." Now this truly surreal: 6 months after the crisis in public finances has reached noticeable proportions is hardly an 'immediate' action. Even the Government itself has admitted this much! As far as €440mln in savings being a 'firm action' - instead of savings, this government managed to get a spending over-run of €351mln by year end, missing its 'firm' target by almost €800mln!

Irish taxpayers don't need this belated and politically expedient drivel that borders on insulting to our intelligence at times. We simply want to hear the truth!
Posted by TrueEconomics at 11:33 PM