Public Sector: A Feast Amidst the Plague

Oh, no, I am not making this up. Here is an illustration from CSO's release: 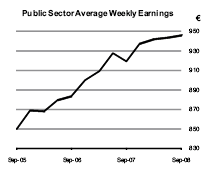 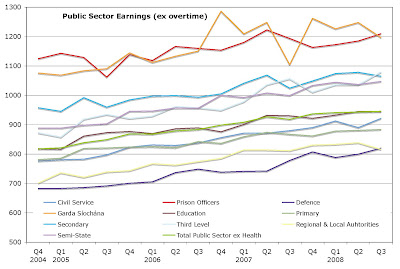 All sub-sectors of public employment are up! While the rest of the economy is buckling under the weight of a severe recession.

Oh, dear, who can now take our Brian-Brian-Mary Trio seriously?


PS: to our previous post (here):
According to CSO release today, retail sales volumes fell by 1.2% m-o-m in November, with the annual rate of decline of 8.1% (exacerbating a 7.5% decline in October). The last time the annual rate fell to these levels was in February 1984. November core sales (ex-motor) volumes fell by 1.9% m-o-m, and by 7.8% y-o-y. Car sales were down 11% y-o-y. Overall, core retail sales have now fallen - in y-o-y terms - at a rate not seen since April 1975. Consumers are clearly boycotting Brian-Brian-Mary policies and spending only on bare necessities at home, preferring to take their Euros to Northern Ireland, the UK, the Continent, the US or anywhere else where they are welcomed. In doing so, they indeed fulfill their real (ass opposed to Lenihaenesque) patriotic duty of serving their families' needs!


PPS: a fellow economist (hat tip to Brian) just asked (rhetorically) if these figures mean that we might register and unadjusted decline in December retail sails. My view - quite possibly. And January sales, and February sales, and so on, well into a -4.5-6% fall in retail sales for 2009! Laffer Curve is merciless - raise taxes, see revenue evaporate. Brian-Brian-Mary should have been sent to Economics 101 before they were allowed to run the country!
Posted by TrueEconomics at 11:55 AM