A View From the Musroom Cloud III

As another day of carnage ensues, there are several new and old issues worth giving a thought to:

(1) Recall S&P ratings update (here): now that Irish 10-year spreads, predictably, are pushing beyond 300bps spread on German bund, what service did S&P provide to the bonds buyers who subscribed to the latest Irish issue of 5-year bonds on the back of AAA rating? The yields, as I have predicted (see here and here) on our bonds have moved in above the Greeks' leaving a wave of devastation behind in the balance sheets of those who bought into this paper on the back of S&P's ratings;

(2) Despite Mr Lenihan's assurances to the contrary on last night's Prime Time, the government is appearing to run thin on actual liquidity (in addition to running thin on any ideas). Do the maths. Mr Lenihan (who was, it must be said, trying to do his best in answering tough questions and did solicit some real compassion from this observer for being, evidently, under immense pressure both inside the Cabinet and in the wider world) stated that banks recapitalization requirements were ca €10bn in 2009.

Now, we know this figure was hammered out but the incompetent risk-pricing non-entities in the Department of Finance on the basis of the following assumptions:
(a) BofI and AIB raising some €2-3bn of their own funding,
(b) Anglo's depositors staying put (saying nothing about other banks' depositors),
(c) shares valuations for the three banks at twice above current, and
(d) no skeletons in the closets when it comes to loan books.

All four of these assumptions have now been challenged. So why is Mr Lenihan sticking to this figure? Is it because he has nothing new coming in with the morning briefing papers from our civil service mandarins?

Some commentators estimate the state exposure under recapitalization/guarantee schemes at €30bn. I would put the figure at a more modest €16-18bn. This would leave Mr Lenihan with just €2-4bn reserve to finance, in 2009 alone:
In other words, no matter how you spin things, we are in the hole for, in the better case scenario, €16-18bn in 2009. Can the Minister really look straight into the voters eyes (as he did last night) and tell us - 'It's ok, folks, we'll just tap the credit markets for that. We have low sovereign debt'?

(3) David McWilliams brought back the specter of external rescue yesterday (here) with Ireland using a threat to leave the Euro if the ECB/EU Commission to get some funds. I am not sure this is going to be necessary. It is more likely that the Government will tap ECB/EUC for money under the argument that Ireland is yet to have a second Lisbon vote and that denying it emergency aid will be detrimental to the cause of getting us to vote Lisbon in. The funds will arrive in a combination of a straight ECB loan, acceptance of state paper as a collateral for more borrowing, some mixture of the 'knowledge' economy and capital spending investment assistance from the EUC and support for dwindling multinational employment in the likes of Limerick. Saving the face publicly, however, will not fool the debt markets and the yields will go further up.

(4) And while we are on the subject of the Euro - imagine our current Gang of Three running the monetary policy and managing our currency if we were to exit the common currency area? Close your eyes and watch Mary Coughlan trying to compute a three-party FX arbitrage parity, while Brian Cowen discusses a helicopter drop of money with Mr Hurley... Frightening!

(5) More from the bond markets - as our 10-year spreads moved above 300 bps, our short and medium term paper (6-24 months) breached 290bps last night. This suggests a temporary compression in the time structure of the bonds, implying that our 5 year yields will be climbing up and up and up in days to come.

(6) On the positive side, we have the latest comprehensive Government programme for dealing with this crisis (hat tip to Brian, courtesy of the source) in line with our closest competitor for being the worst performing economy in Europe, Latvia (here): 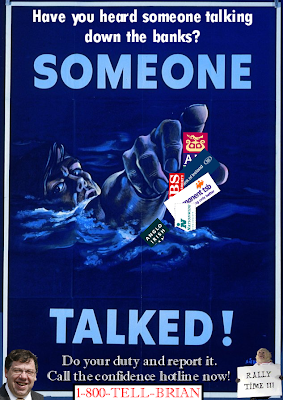 Posted by TrueEconomics at 8:35 AM