A foreigner? We are not too welcoming in our Public Sector...

Few months back I was invited to a presentation by the Immigrant Council of Ireland, attended amongst others by a senior civil servant in charge of one of our core Government Departments. During a lively discussion about racism and discrimination in Ireland, our brave Public Sector employee professed to be concerned about discrimination in the private sector employment. I, somewhat rhetorically, asked him if he perceived a disproportionately small number of foreign nationals employed in the public sector (inclusive of our state enterprises), as compared against their much stronger presence in the private sectors to be a sign of something dodgy going on in the state employment. He flared white with indignation.

Hmmm… figures from CSO’s Foreign Nationals: PPSN Allocations and Employment, 2007 (here) released on January 8 give my concern a strong backing.

Table below lists employment (per CSO) by sector (including foreign share of employment) of foreign nationals in Ireland in 2007. 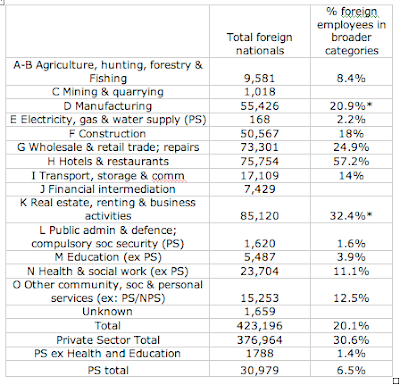 Setting aside two public sectors with significant contribution by foreign non-nationals: Education and Health, the rest of public sectors had only 1.4% of their entire employment pool covered by the foreign nationals.

For a foreign national residing in Ireland, the probability of ending up in Public Sector employment ranged from 11.1% in Health & Social Work, to 3.9% in Education, to ca 2.2% in our semi-state companies and 1.6% in Public Administration. In other words, a foreigner is 19 times (!) more likely to gain a job in our private economy than in the most insulated and unions-protected Irish Public Administration sector!

It is also worth noting that within the Education category, only 663 foreign staff were employed in secondary education (heaviest unionization), the rest were working in either primary (1,068 – virtually un-unionized) or tertiary education (less unionized). In Transport, only 98 were in Transport via railways (unionized), while the largest share were employed (6,844) in less unionized Other Land Transport.

At the same time, there is absolutely no sign of lower level of skills amongst the foreigners as compared to Irish workers.

Why wouldn’t our workers’ rights defenders, like SIPTU, ICTU, Impact etc, take up the case of finding out what is going on inside our state-controlled employment?
Posted by TrueEconomics at 1:45 PM