“I have some good news, at least for the intermediate term: Investors are slowly regaining their appetite for risk”, wrote Marketwatch’s Mark Hulbert in his today’s column (here)
“This represents a big shift from the situation that prevailed last fall, when investors became so repulsed by any kind of risk that the yields on safe-haven investments like Treasury bills actually went negative.”

But now, says Hulbert, with January effect in full swing, things are looking up – investors are looking for risk once again.

“Of the several straws in the wind that point to at least a partial return of a risk appetite, one of the more compelling is the recent relative strength of risky small-cap stocks over the more conservative large caps. So far this year through Tuesday night, for example, large-cap stocks (as measured by the Standard & Poor's 500 index (SPX: S&P 500 Index) have fallen 3.5%. Small-cap stocks, as measured by the Value Line Arithmetic Index (92040310), have declined by just 1.1%.”

Now, I am not convinced by Hulbert’s main argument.

January effect is a tax-minimization event, driven by heavier sales of shares with lowest capital gains potential to maximize losses in December (blue chips down) and re-balancing portfolio toward higher capital gains potential (small cap) in the new year. In normal years, movements correlate positively with risk, i.e. small cap – higher expected return, higher risk, blue chip - smaller expected returns, lower risk. But is that the case this time around? In other words, the markets might be going into smaller cap because the larger cap is actually relatively riskier (controlling for current valuations), not because they are seeking higher risk-return strategies.

Chart below illustrates Mark Hulbert’s point – at its right-hand margin. Indeed, the short-term performance by the two indices does suggest that the markets are placing more faith in the small-caps. But it shows that this was true for much of the 2008 with exception of the late autumn. In other words, if current divergence vis-à-vis S&P is a sign of new appetite for risk, what did the market have appetite for in July 2008 when small caps went up and S&P stayed relatively flat? Why did the price of risk implicit in the difference in two indices has fallen in April-June and July-early August? Were these the ‘turning’ points in underlying appetite for risk or just traditional bear rallies? 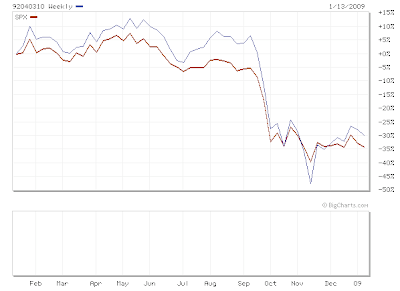 An alternative explanation for the ‘January effect’-like pattern observed is that investors' risk perception might have shifted. Consider the following scenario: You are in a market with four broad asset classes:
You believe that too much risk-taking has taken place in the second half of December by pursuing a bear rally in S&P500 stocks and the Treasuries. If you move into relative safety, you will move into the two remaining assets. You will have an incentive to prefer the small caps if you believe that they have taken the heaviest beating to date (which they did – see peak to trough moves around September-mid November) and you invoke another powerful anomaly of the ‘Winner’s Curse”. The real question then becomes is what does the analysis of relative position changes in corporate debt and small cap shares tell us. The large cap stocks are irrelevant here.

Hence, what appears to be a renewed appetite for risk can be interpreted as a hedging strategy against rising risk levels and falling expected returns in the so-called traditionally ‘safer’ asset classes.

What Hulbert is right about is that one should not overplay the story too much. Instead, the return of the January effect pattern (or something else resembling it) might mean “that the stock market will gradually resume its normal function of assessing different securities' relative risks and returns, a function it couldn't fulfill when it was indiscriminately punishing virtually everything other than Treasuries.”

Yes, but… even if Hulbert is correct, the return to rationality in the markets will be bound to:
• trigger fresh downgrades in many companies and indices as corporate returns deteriorate throughout H1 2009, as the bath water gets muddier with longer recession; and
• this rationality will remain extremely fragile and prone to collapse every time the elephant in the room – the US Government – moves about.

Hulbert omits the latter issue, but it is non-trivial to his topic. We are in the changing political cycle – and with it – a prospect of a new stimulus that is bound to prop up smaller business. If, as is the case, Uncle Sam’s rescue packages for many blue chips were already priced into these companies valuations in late December, Obama's first 100-day sweetheart package for Congress is yet to be fully priced into stocks valuations. It might be that the ‘January effect’ is simply the reflection of this delay in recognizing that the next Uncle Sam's move will a stimulus for smaller companies?..
Posted by TrueEconomics at 10:01 PM