Here are the facts in support of Irish credit ratings downgrade (for those impatient to get the actual downgrade forecast, see Table 2 at the bottom of this post) taken directly from the IMF’s latest Global Financial Stability Report published in October 2008.

These facts suggest that:
(a) the problem of Ireland’s high risk of sovereign and economic insolvency is not new –by the end of 2007 Ireland has emerged as the most financially exposed country in the developed world, to the total silence of Irish Government, Regulators and other domestic financial services authorities; and
(b) our sovereign ratings have are failing to reflect this risk, despite the fact that the data was available to all rating agencies for some time.

Our financial health ca January 2008...
Ireland ranks last out of the entire group of countries/ regions covered in the report in terms of its overall capital markets/financial stability (see table below). The countries/regions reported by the IMF include: the EU, Euro area, Canada, US, Japan, Austria, Belgium, Denmark, Finland, France, Germany, Greece, Ireland, Italy, Luxembourg, the Netherlands, Portugal, Spain, Sweden, the UK, a general set of all emerging economies. Report parameters are given in IMF’s Table 3 in absolute terms.

Table 1 below ranks Ireland, and its two European competitors for the title of the worst-off (in terms of financial stability) Italy and Greece, across these same IMF-selected parameters.

Table 1: Ranking for Selected Indicators on the Size of the Capital Markets, 2007, expressed as % of country GDP/GNP

Figures below plot the data that led to the above table results. 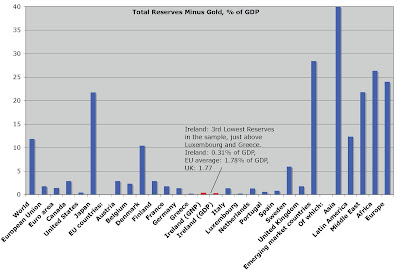 Figure 1 above shows total economies’ reserves (net of gold) as a percentage of GDP (and GNP for Ireland). Technically, ceteris paribus, higher levels of reserves relative to the economy size imply higher levels of solvency. Notice that this data is for 2007 – the year when Ireland was still in a relatively benign economic environment. In 2007 Ireland’s total reserves stood at a level almost 6 times below the EU27 average. Out of all main global financial centers selected by the IMF only Greece and Luxembourg showed weaker reserves base than Ireland.

Of course, we knew this already, as most of our wealth was trapped in the deteriorating housing markets. But the rating agencies failed to see this as a serious threat, preferring to focus disproportionately on the deceptively low public debt levels in this country. The irony that the state has managed to drive down its debt at the expense of economic stability (by taxing businesses and consumers to produce a ‘savings’ piggy bank for the public sector) and by imperiling our financial stability (by re-directing private financial flows and diverting investment into property and other state-incentivised schemes), was totally missed by the likes of S&P and Fitch. 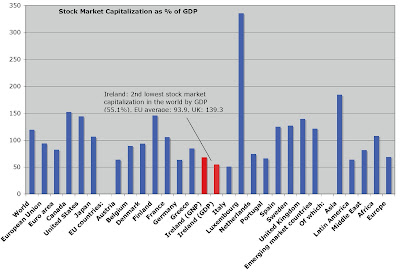 As the above figure shows, our stock market capitalization as the percentage of GDP/GNP ranked the second lowest in the world in 2007. Italy was the only country with a relative weight of the stock markets capitalization in its economy falling below that of Ireland. This parameter reflects, indirectly, the overall mammoth share of debt (as opposed to equity) on our corporate balance sheets and the effects of Irish economy’s dependence on leveraging and housing markets.

Figure 3: Debt securities as % of GDP 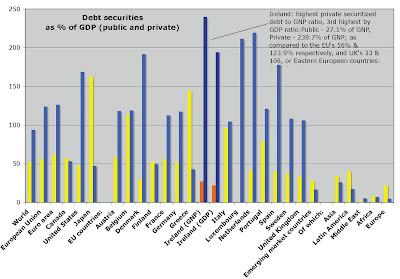 Figure 3 above shows how extreme were the levels of Irish debt liabilities in 2007, with the country leading the world in terms of private debt share of GDP. In the figure 4 below, the two sources of debt are combined to show that Ireland (as a share of GNP) has achieved a dubious distinction of becoming world’s most debt-ridden country by the end of 2007 – a point also missed by the rating agencies. 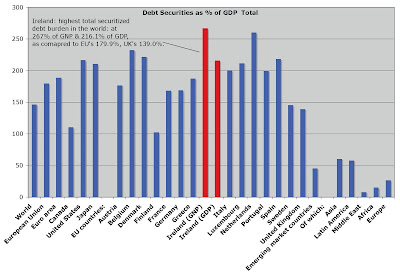 Figure 5: Bank Assets as % of GDP/GNP 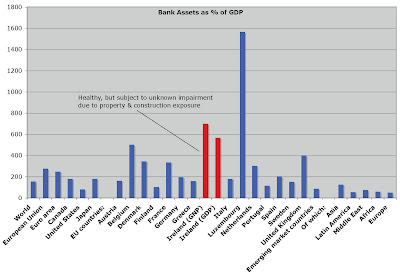 When it comes to the financial system assets side of the balance sheet, Irish banking assets appeared to be relatively healthy in 2007 (Figure 5), although this does not include any correction for these assets quality. However two factors must be kept in mind:
(1) to date, Ireland has been leading the EU in terms of commercial bankruptcies (up 250% on 2007) and in terms of housing and commercial real estate crises, implying mid-term impairment charges for Irish banking system well in excess of those in other European countries;
(2) as the following two figures show, our assets cushion (non-bank assets as % of the total debt) and reserves cushion (total reserves as % of the total debt) were both thin, despite the fact that we are faced with an unprecedented (by global comparisons) total debt mountain. 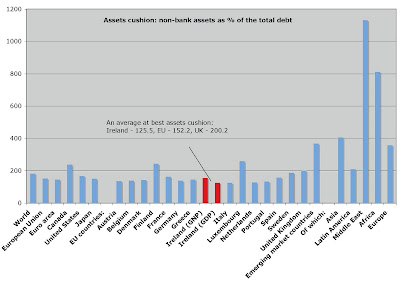 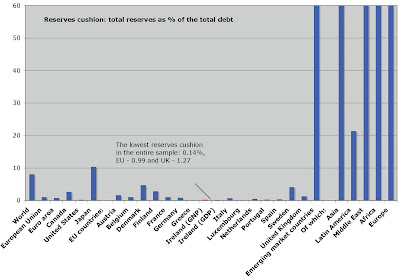 It is worth mentioning that our Assets cushion (Figure 6) is artificially inflated by the still high property valuations of 2007. Correcting for 2008 commercial and residential property contractions, Ireland's non-bank assets to GDP or GNP stand at the lowest level in the entire developed countries sub-sample. Of course, as far as our reserves to GDP ratio goes - the fact is that our banking sector reserves stood at a critically low levels even in 2007 invites two observations:
(1) reserve requirement ratios are the prerogative of Irish Central Bank and Financial Regulator - with domestic regulators having full access to the powerful policy lever of raising these requirements. Both did absolutely nothing;
(2) the IMF figure for reserves includes state own reserves (NPRF), implying that the real problem of the banking sector reserves crisis we are currently experiencing is even worse than the official figures suggest.

Given a precipitous fall in Irish shares, property and economic growth – all registering declines well in excess of other European countries – we are now facing the assets and reserves cushions that are critically low, warranting a significant downgrade on our credit ratings.

Ireland’s comparatives (2008-2009) and ratings forecast
Comparing our financial position to that of the peer countries, Table 2 below shows that our current credit fundamentals are woefully out of line with other AAA rated countries in Europe. In fact, even disregarding the realities of our economic slowdown and fiscal challenges facing the country in 2009, comparative analysis of financial stability fundamentals for Ireland suggest that our true ratings should be below those of Greece or Italy. 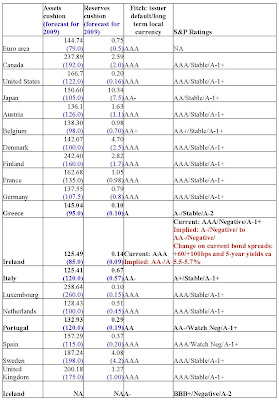 The above results show that Ireland is well over-due a downgrade on its sovereign debt to bring us in line with our relative peers – Italy, Greece and (correcting for Eurzone membership) Iceland. But Table 2 above (see forecasts for financial stability parameters marked in blue) also shows that taking into account our economic and fiscal prospects for 2009, the downgrade currently overdue can actually be much deeper than the one forecasted herein.

Current environment: even more room for downgrades
One cannot ignore the extent of the economic and fiscal deterioration in Ireland to-date. We are facing an officially projected deficit that is unprecedented in the entire EU27. And the official forecast, as I argued before (here) is by all means an underestimate of the fiscal black hole we are heading for.

Even with An Bord Snip delivering significant – ca 10% - cuts in pubic spending (at least half of which is already factored into the Department of Finance forecasts), and even assuming the Government has the guts to implement such changes, Ireland is likely to find itself in ca 10% deficit in 2009.

This alone should trigger our ratings to be downgraded below AA- and our bonds yields to head closer to 6-6.5% for a 10-year paper. Of course, Ireland cannot at this time issue 10-year paper, implying that our borrowings for the foreseeable future will be short-term. Should the downturn extend through 2013, or alternatively, should the post-downturn growth fail to reach above 3%, Ireland will be in a serious trouble when redemptions on 2008-2009 debt issues come knocking on the door.

But the fiscal challenge is not the only one. Ireland’s economic contraction is likely to reach 4.5-5% (GDP terms) in 2009, implying that we will continue to lead the EU in terms of recessionary pressures. Such a scenario also warrants a downgrade of our ratings to AA-/BBB+.

Last, but not least, the Irish Government has underwritten some €450bn worth of debts and obligations on the domestic banks’ books, plus an open-ended commitment to supply capital to the banks. The nationalization of Anglo alone is likely to add something to the tune of €7-10bn to 2009 liabilities of the Exchequer and some economists estimated last week that this liability can easily reach €15-30bn.

Now, do the math. The Government boasts of holding some €20bn in liquid reserves, including surplus 2008 borrowings. Of these, Anglo commitment will eat through, say €7bn, previous capital commitments alongside the underwriting of the equity placements for AIB and BofI – another €5bn, the Exchequer deficit, assuming An Board Snip delivers real savings, will take up the rest. This leaves Ireland Inc naked for 2009 – no stimulus, no cushion for error, no buffers for any bank or building society default and, even more crucially, no deficit financing for 2010 should the sovereign debt markets get tougher throughout the year.

In these conditions, it is highly likely Ireland will push 10-year yields well beyond 350-400bps spread on German bonds and despite Mr Cowen's protestations to the contrary, find itself begging for funds from external donors. IMF or ECB or both - the acronyms are semantic: either one will part with its money only on extremely strict conditions...
Posted by TrueEconomics at 11:43 AM