It is this (see Part I) political motivation for the Euro that now threatens to undermine the main reasons for arguing that the Euro is a success story. European elites see the strengthening of the Euro against the US dollar as a sign that the new currency is gaining the market share as a global reserve currency.

NBER paper by Michael Bordo and Harold James (NBER Working Paper 13815, February 2008) makes similar point in devoting quite a bit of space to the discussion of the Euro as an international currency. They identify the precise mechanics for politically motivated international demand for the Euro as an alternative to the US dollar.

Because of the demand for Euro as an international reserve vehicle is politically motivated, argue Bordo and James,
“It is – projecting into the future – quite conceivable that there will be moments at which massive political pressure, built up by underlying anti-globalization concerns and focused on the technical necessities of dealing with major international crises, leads to a serious onslaught against the ECB and against the euro.”

From politics to economic fundamentals
Furthermore, the strengthening of the Euro throughout 2008 has been largely driven not by the underlying strengths of the Eurozone economies, but by the interest rates differentials between the ECB, BofE and the US Fed.

Chart 1 shows the link between the FX market and the policy gap – the gap between the cost of central banks funding as determined by the difference between the actual (realised) monthly Federal Funds Rates and the minimum benchmark ECB Deposit Facility rate from August 2000 through December 2008 (the entire historical data available to us). 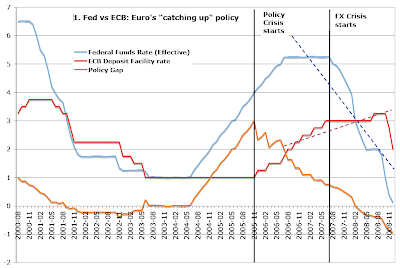 As this figure highlights, the current Euro crisis is a lagged aftermath of the policy crisis that saw the medium-run directionality of the Federal Reserve policy becoming the exact opposite of the ECB’s policy stance around November 2005. By July 2007, as the credit crisis first manifested itself, the ECB’s suicidal denial of the problem became even more clear as the Eurozone rates have actually risen in the face of collapsing credit markets, just as the Fed aggressively pursued rates cuts.

Of course, many other variables help driving the exchange rates especially in the long run (more on this in the next post). However, the link between the Euro value and the interest rates mismatch between the ECB and the Fed is a historical regularity, as shown in Figures 2 and 3 below. 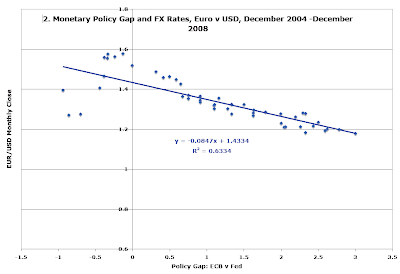 Figure 2 above plots the relationship between the monetary policy gap and the Euro/USD exchange rate. This relationship is causal, strong (with 63% of variation in the FX exchange rate captured by variation in the policy gap) and robust over time. It is also economically significant, with every +25bps change in the gap between the US Fed rates and the ECB rates inducing a ca Euro 0.021 strengthening in the dollar. This assumes parity at USD1.43 per 1 Euro for the period selected.

Figure 3 shows a similar relationship between the synthetic Euro/Dollar rate (linked to the traded index designed to replicate the returns on holding Euro). In fact, both the synthetic index and the actual exchange rates reaction to the monetary policy gap are virtually identical at -8.2 points for the former and -8.5 for the latter. 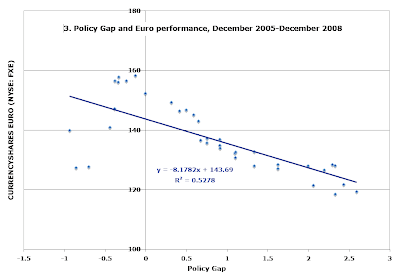 So where do we go next?
Figure 4 shows the actual movements in the monthly EUR/USD exchange rate and its 6-months and 12-months moving averages. 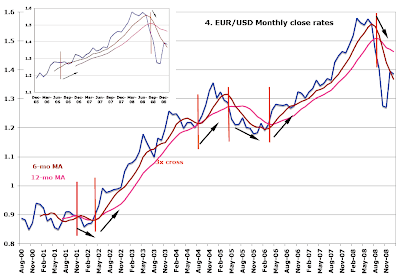 The relationship between the three lines indicates that in Q3 2008 we have entered a new trend of strengthening dollar that, so far, has taken us back to the levels closer to the resistance levels of the early 2007. The fact that we have, since, returned back to the levels consistent with Q3 2007 is a worrying point, as it suggests that November-December correction in the extremely high valuations of the Euro is not likely to persist in time.

However, there is little certainty as to the near-term direction in the EUR/USD rate. Several forces are currently pulling the FX markets demand for both currencies in different directions:
(1) The monetary policy gap is set to close in the next few months as the ECB loosens the key rates more dramatically than the already bootstrapped Fed;
(2) The liquidity policy gap (not plotted in this post) is also set to narrow as the ECB will be playing catch up with the Fed on injecting liquidity into the markets. Note: ECB’s liquidity creation is likely to support sovereign bond markets across Europe’s weaker economies (Ireland, Greece, Italy, Spain, etc), while the US liquidity creation is going primarily into banking and financial sectors;
(3) Financial markets demand for Euro is likely to weaken relative to the US dollar around Q2 2009 as US stock markets and bond markets will strengthen relative to the Eurozone;
(4) Both the US and the Eurozone’s imports will stagnate as the US consumers continue to de-leverage and the Eurozone consumers suffer significant personal disposable income shocks. However, while the US consumers de-leveraging has been pretty much fully priced in the current valuations, the slowdown in the Eurozone’s consumer demand is yet to be reflected in the FX valuations;
(5) US exports will remain relatively more robust than those in the Eurozone;
(6) A relative strengthening of the US economy vis-à-vis that of the Eurozone countries starting with Q2 2009 is likely to further improve demand for dollars;
(7) Relatively more dynamic prices contraction in the real estate coupled with the falling cost of mortgages financing in the US as compared to the Eurozone will continue to push the dollar down against the Euro;
(8) Stronger fiscal stimuli in the US than in the Eurozone will tend to favour relative increases in demand for dollar.
(1)-(3), (5)-(6) and (8) will all tend to support relative devaluation of the Euro. (4) and (7) will imply stronger decline in foreign exchange demand in the Eurozone than in the US – a force that will tend to support further devaluation of the dollar.

On the net, the preponderance of fundamentals suggests strengthening of the dollar relative to Euro in the next 3-6 months into $1.30/€1-$1.35/€1 range, but the key to this process will be increased volatility of the 3-months and 6-month MA trends (as opposed to the volatility in the daily series). The signs of this process taking hold should be traceable by the 3-way crossovers in the actual monthly series (led by weekly series) and the 6- and 12-months MA lines, as shown in the historical plot in Figure 4 above.
Posted by TrueEconomics at 5:57 PM