Last month I predicted that the forward looking barometer of economic activity in the Euro-area, the €-coin indicator published by CEPR and Banca d’Italia will register a small temporary correction from its historically low level of -0.15% (growth of Euro-area GDP forecast) in December 2008. I also forecast that the Euro-coin indicator will follow the downward path in February back to -0.15% reading. 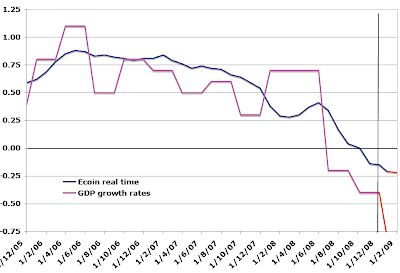 Alas, I was too optimistic. Today’s Euro-coin data shows that the measure of economic activity in the Euro-area has fallen once again, this time to -0.21% in January 2009. This changes both my original forecast for February 2009 Euro-coin indicator and for Q1 2009 GDP growth rate in the Eurozone.

My new forecasts are:

Posted by TrueEconomics at 4:57 PM