So, now that you've been fed the 'great news' story by the Irish 'analysts', and having, hopefully read my first post on the subject of Live Register numbers (link here), you might wonder - what sub-trends dominate the time series relating to irish unemployment in July.

Now, when you think about it, the long term unemployed numbers include (or are net of) those who lose their benefits due to duration and changes in family circumstances. They are also net of those who leave the LR deciding to emigrate. These effects are much less pronounced for the shorter-term unemployed. And yet, the long term unemployment continues to rise. Not, that is something you won't hear in the Irish media either. Never mind, the 'experts' Irish broadcast editors pick for their panels are smart & do original research, aren't they?

Youth unemployment next: Per CSO "In the year to July 2012 the number of persons aged 25 and over on the Live Register decreased by 1,340 (-0.4%), and the number of persons aged under 25 decreased by 8,621 (-9.7%). Annual decreases in persons aged under 25 have occurred in all months since July 2010. The percentage of persons aged under 25 on the Live Register now stands at 17.5% for July 2012, down from 19.0% in July 2011 and 20.3 % in July 2010." These are NOT seasonally-adjusted figures, so y/y comparatives is all that matters and the news is decent here - at a headline level. Alas, we have no idea whether the young unemployed are getting new jobs or simply emigrate, though given the reduction in LR benefits for the younger workers, most likely they have a stronger incentive to emigrate. They also have a much better ability to do so, due to visa restrictions differences by age and lack of debt chain holding them back in Ireland. 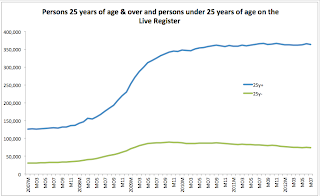 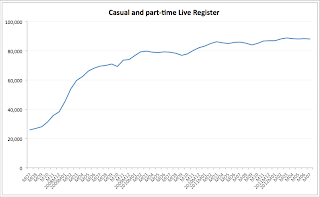 Nationals v Non-Nationals breakdown shows a slight decline in the proportion of LR recipients who are non-nationals. The fact that this decline has been very shallow and the fact that the numbers of national on the LR is declining at a similar percentage rate as that of non-nationals suggests that emigration is most likely fairly evenly spread between the two categories. 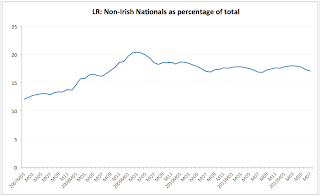 So much more 'speculative' analysis, if you want, but all pointing to either little change or deterioration in the underlying conditions relating to the labor market in Ireland.
Posted by TrueEconomics at 5:00 PM

Anyone care to talk about the Elephant in the room ?
emigration