Recent Country Risk survey by Euromoney shows some interesting trends relating to the Russian economy. Here are the headlines:

"The five economies of the Brics have seen an aggregate ECR score loss of 6.4 points this year, lowering the average score by 3.1 points to 56.8. South Africa (-2 points), Brazil (-1.9) and India (-1.6) have endured the worst declines in sentiment, resulting from concerns about export market conditions, amid waning demand for commodities and increased domestic security risks. However, all five have seen large declines in their economic assessment scores, as contributors have reassessed their expectations for global growth and have acknowledged the slowdown in China’s breakneck pace of expansion."

Moreover: "Four of the five Brics (Russia the exception) have also endured lower political risk scores – led by India (down 0.9 points) and China (-0.8)." 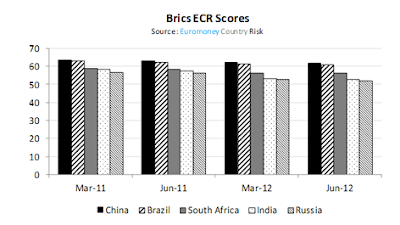 Specifically on Russia:
"ECR economists still regard Russia as the weakest of the Brics, ranking 60 in the world, despite the three main ratings agencies placing India below Russia. India might have a lower economic assessment than Russia, but its political and structural risk assessments are more favourable, according to ECR contributors, with particularly large gulfs in the scores for government non-payments/non-repatriation, information access/transparency, institutional risk, the regulatory and policy environment, and demographics – factors seemingly not being reflected in the various credit ratings. This might be due to the comparative security provided by Russia’s status as one of the world’s largest energy producers."

Despite this, current survey shows little deterioration in Russia's risk score with June 2012 risk assessment on par with China: 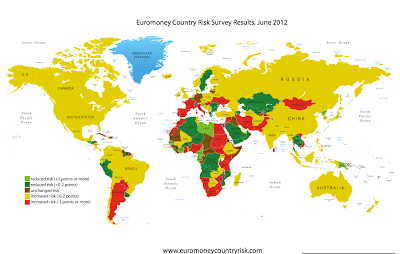 Disclosure: I will be joining Euromoney survey panel starting with the next survey.
Posted by TrueEconomics at 3:59 PM