IDA recently used the following chart in the context of Irish competitiveness comparatives to the rest of EEC: 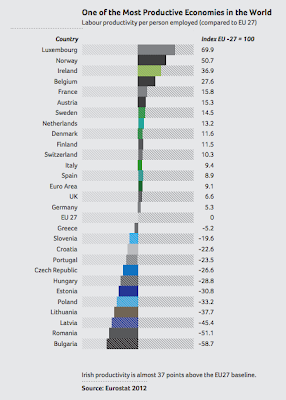 According to the above, Irish labour productivity per person employed is at 136.9% of the EU27 average, which makes us the second most productive economy in the Euro Area and the third most productive in the EEC. Of course, the thing that jumps out in the chart is the massive over-performance in output terms by two other 'special' countries: Luxembourg and Norway. This should ring lots of alarm bells when it comes to trusting the above data to base actual comparative assessments on.

It turns out that adjusting our productivity performance for GDP/GNP gap so as to remove the portion of our output that has absolutely no anchoring in Ireland (net after-tax factor payments to foreign investors) implies Irish productivity index at around 102-106% of the EU27 average, placing us below-to-just-above Germany and ahead of Greece.

I wouldn't argue that that is indeed where we are positioned, but rather that the chart used by IDA is simply reflective of vastly over-inflated real productivity of our workforce, just as it is for Norway (petro-dollars economy) and Lux (an economy with massively undercounted non-resident workforce and an industrial scale 'dry cleaning laundry' for European, EEC & Eastern European corporates).
Posted by TrueEconomics at 5:07 PM

Productivity is a really awful kind of science. Consider the comments of Amar Bhide, at LSE in late 2010, on what he termed sector-wide mis-allocation of capital (what better description for the behaviour witnessed in Ireland). What Bhide is also describing, is that which the a US Treasury Secretary referred to in recent years, as the exemplary growth in high-end jobs, in financial services. The US Treasury Secretary, wondered why parts of the economy, other than financial services, were not improving at the same rate.

"Think of the issue of growth from the point of view of the CEO of a large bank. If I want to grow my small lending portfolio, then I have to go through this awful process of hiring lots of bankers, and then I need to put them through a two year training program. And then they have to go around looking for good clients, and on and on.

Instead I can just crank up this mortgage producing machine. Because I don't need any judgement on the part of the people who are generating these mortgages. All I have to do is get people to fill out these forms, get it shipped out to New York and out comes the answer. You can really grow very rapidly, and you can get economies of scale. Very high returns on equity.

The attractions of building a huge derivatives book are irresistable.

You don't need to do much. You hire ten traders. Soon you can build a trillion. You can add a trillion here and a trillion there, and in good times to stuff makes really high returns. Once every ten year it collapses. But in the meantime you took a nice piece of the action. Why not.

What this will inevitably mean is that those sectors of the economy, which even today, cannot be easily mechanized [from a borrowing process point of view] will be deprived of credit, and the attention and the money of the banks will go to the sectors where mechanization [of credit creation] is easy.

We will have a huge boom in housing lending, and we will have negative increases in lending to small business.

It is also inherently unstable. Of course, when people make judgements, they make mistakes. Why we de-centralize stuff, is because the behaviour of individual lenders will be un-correlated with other peoples' mistakes. Whereas, if you are going to lend on a model, and everyone is going to lend on more or less the same model, using more or less the same historical data, if that model is wrong, it is going to bring the system crashing down".

Constantin,I think it may well be worth your while doing a little investigative undercover work on Margins achieved among the Irish Grocery trade.I am reliably informed margins in the region of 40-50% are the norm.How can this type of exploitation go unaddressed.Worth a look.In recessionary times and general shortage of disposable income ,why should joe public be ripped off in this area.Ex retailer?