An unedited version of my Sunday Times article from July 29, 2012. Please note - this is the last article for the Sunday Times for at least some time to come.


As markets attention shifted from the issues of economic growth to the more immediate crises in Spain, Italy and, once again, Greece, our policy-makers have been basking in a rare spot the sunlight. This week, Irish Credit Default Swaps – insurance contracts on Government bonds – have traded out of the range of the top-10 highest risk economies in the world, for the first time in a number of years. The core driver for this was not something that happened in Ireland, however. Accelerating costs if insuring Italian bonds, helped by margins hikes and ratings agencies warnings, plus the return to CDS markets of Greek bonds have pushed out of the markets spotlight.

With improvement in Irish bonds and CDS contracts relative performance compared to our peers in the peripheral Europe, it has been all too easy for Irish policymakers to forget that the economy is still stalled in the no-man’s land between recession and stagnation. In the short run, the news from the real economy here remain abysmal. But more worryingly, the news continue to reinforce the reality of the entire crisis, compounding already disastrous declines in household wealth, pensions, income and jobs prospects. This compounding means two things for the future. In the near term, it spells no prospect for a recovery in the domestic side of the economy. In the longer run they mean decades of depressed economic growth and a massive black hole of Ireland’s Lost Generation – those born in the late 1960s and into the early 1990s.

The future is truly bleak for the generations of the 30-50-year olds due to the historically massive debt bubble implosion that severely impacted their family balancesheets. The future is grim for today’s 20-year olds who have entered their careers amidst the recession.

Here are the facts.

Irish residents of the cohort of 30-50 years of age are the ones who are carrying the main weight of the household debt accumulated during 2000-2007 period when they either entered the property markets or traded up. According to the data trickling from the banks, these are the families that vastly (some 80% plus) dominating the ranks of high Loan-to-Value Ratio mortgages written against the property valuations that have all but collapsed. This week’s data release by the CSO shows that, measured using mortgages drawdowns, Irish property prices have fallen now 50% on average and 56% in Dublin compared to their peak. Property prices now stand at 35.2% below 2005 levels in terms of comparable data, and are closer to 2000-2001 levels – nominally – based on non-CSO data. And all signs are, the prices are yet to find their bottom.

Using Central Bank data on outstanding credit for house purchases, the implied loss in household wealth relating to the current crisis is currently running at over €90 billion. Taking into the account downpayments, stamp duty and VAT expenditures incurred by the households in purchasing their homes, the true volume of economic losses in the system is closer to €120 billion.

In a normally functioning economy, correcting for the bubble by assuming that house prices appreciation should be running on average at the rate of general inflation, Irish households – purchasers of homes during 2001-2007 period – should have had their net worth rise by a cumulative of ca €45 billion, providing an average retirement support of roughly €35,000 per person in the cohort of 30-50 year olds.

Put differently, even if we cancel out the entire negative equity component of current mortgages, Irish households would require a decade of savings (in excess of debt and remaining mortgages repayments) at roughly 10% annual savings rate to recover the amounts of pensionable wealth they have lost since the onset of the crisis. Adjusting for higher current and future taxes, increased risk of unemployment, and expected higher mortgages interest costs once the extraordinary ECB measures to support liquidity in the euro area banking sector are wound down, Irish middle-age middle class households have been thrown back decades in terms of their ability to finance pensions.

The effects of these wealth declines, however, imply that younger generations will also feel tremendous burden of the crisis. Here is how this intergenerational contagion works.

Firstly, absent pensions provisions, current 30-50 year olds will be delaying their retirement, preventing upward mobility of earnings and career prospects for the younger workers. Secondly, even prior to the crisis Irish pensions system was grossly underfunded with the country facing some of the largest unfunded future liabilities bills in the OECD. These liabilities represent the costs of maintaining current levels of public health, pensions and social welfare provisions commitments under the existent tax system. They do not account for the private pensions shortfalls.

The crisis most likely raised these costs by a significant percentage as pensions-poor households will be forced – in years to come – to rely more extensively on public system. Today’s younger workers will be paying for this through their taxes directly, while indirectly facing additional costs in terms of reductions in expected future benefits. Thirdly, international evidence clearly shows that younger workers entering their careers at the time of a recession experience on average depressed levels of life-time earnings and elevated levels of future unemployment.

It might fashionable today in the Irish media to talk about banks’ customers vs taxpayers squeeze in relation to the high cost of adjustable rate mortgages and trackers subsidization. The reality of our collective insolvency runs much deeper than the immediate crisis within the banking sector. Take a simple exercise in projecting future losses on life-time earnings for current generation of the 20-30 year-olds. On average, these workers could have expected their life-time earnings decline by 8-10 percent compared to those of workers entering the workforce outside a normal recession. At current average earnings, the overall life-time income losses that can be expected by the younger generation amount to some €145-180,000 in current value terms. Per Census data for 2006 population distribution, and using the CSO projected labour force participation rates through 2041, the above range implies a cumulative loss of earnings to the tune of €64-117 billion for the economy as a whole.

Pair these earnings losses for the younger generation with the wealth declines experienced by the middle-aged cohorts and the Lost Generations of Ireland are now on track to a full-blow intertemporal bankruptcy. Both, psychologically and economically, this is a truly disastrous legacy of the boom. And this legacy remains largely hidden behind the rhetoric of our politicians and the media pretending that the negative equity, the wealth destruction and the long-term consequences of the Great Recession will be gone once Ireland’s economy returns to growth. Truth is – the Lost Generations are already here. And they are us. 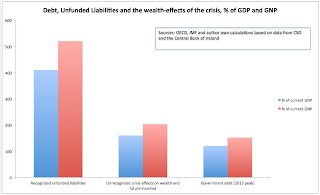 It appears that the euro zone authorities are frantically pushing through the latest magic bullet solution to the Euro area sovereign debt crisis – the promise of a banking license for the European Stabilization Mechanism (ESM) fund. As conceived, the ESM will have lending capacity severely restricted by the capital held. The banking license, it is argued, will allow the ESM to borrow cheap funds from the ECB (just as the commercial banks are currently doing) and lend these funds out into the distressed banking system for recapitalization of troubled banks. The theory goes that while the markets will not accept leveraging of the ESM capital in excess of ca 7:1, the ECB will have to lend to a ‘bank’ and this can raise the ESM total effective lending capacity from €500 billion to €1 trillion. The problem, of course, is that as with all other previous ‘magic bullet’ solutions, the latest idea is likely to have more disastrous unintended consequences than the original problem it tries to address. Under normal operations the ECB does not lend unlimited amounts to any given bank and when it does lend, the loans are less than 12 months in duration. Thus, should the ESM attempt to borrow via a banking license from the ECB, the entire euro area monetary system will become a farcical cover up for indirect and vast lending to the banks and the sovereigns of the euro zone. Hardly a hallmark of a responsible, and reputationally and legally well-run monetary policy.
Posted by TrueEconomics at 8:42 PM

you have been dropped?!?!

you should have put more bias towards the public sector doing such a good job then!!