An interesting blogpost by Professor Steve Hanke on Hungarian economy's adventures in the crisis land.

Here's another look at Hungary (all data is via IMF WEO). Green boxes show ranges of values required for Hungary to effectively converge in economic development with top EU12 states and those that are consistent with long-term sustainability of public finances.

Fron the first chart it is clear that Hungary did well during the period from 1997 through 2006 in terms of real economic growth, but severely underperformed in terms of external balances. In fact, for the period 1995-2017 (incorporating IMF latest forecasts) Hungary operates within its means (in terms of current account balance) in only 4 years. 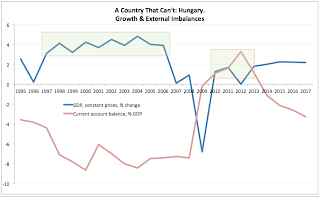 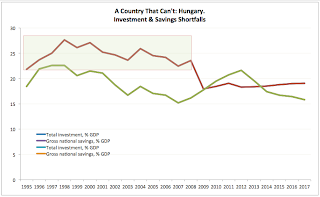 Per chart above, it is also clear that Hungarian investment has declined precipitously, as a share of GDP, from the peak 27.65% in 1998 to 23.54% in 2008 and fell to around 18% from 2012 on. Meanwhile, savings too trended down over the period 1995 through 2017. The economy is becoming less and less capable of generating investment-driven growth (and that is ignoring the issues of credit supply in the banking system etc).

Hungary's Government debt was relatively benign, compared to many european counterparts during the period of 1997-2006. However, the metric used (debt around 60% of GDP) ignores the reality of an economy that is still in catching up with the more advanced European states (including some post-transition economies, such as Czech Republic and Slovenia) in terms of income per capita and other macroeconomic parameters. Such catching up can only be aided by lower debt to GDP ratios and more investment. 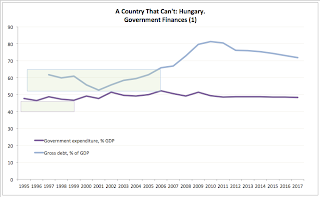 In line with external deficits highlighted above, Hungary has run some extremely severe imbalances on both structural government deficit and net government borrowing (ordinary deficit) sides, as shown in the chart below. In terms of government deficit, Hungary was in the red, on average by 3.48% of GDP in the period pre-accession to the EU. Between 2001 and 2007 the deficit averaged massive 6.92% annually, declining to 2.3% of GDP in 2008-2012. The benign level of current deficit (2012 expected deficit of 3% of GDP comes on top of surplus of 3.96% in 2011) is only highlighting the fact that short-term corrections are no substitute for longer-term prudence. Between 1995 and 2012, Hungarian Government was operating within 3% deficit criterion for only 2 years. 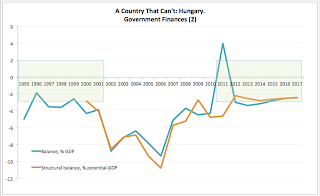 Cumulated, the twin current and government deficits from 2000 on through 2012 are severe: 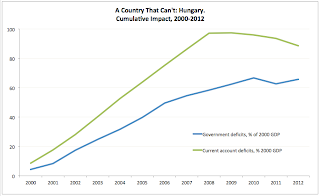 All of this suggests that Hungary suffers (at 80.45% of GDP in 2011) from a classic debt overhang problem exacerbated by the long-term poor performing fiscal deficits and current account dynamics. That these effects should be felt even at the level of debt traditionally considered to be relatively benign (Hungary's 5-year average Government debt through 2012 stands at 78% of GDP compared to 62% for the 5 year period between 2003 and 2007) is probably best explained by the country relatively lower ability to sustain even these levels of debt.
Posted by TrueEconomics at 7:51 PM