We keep hearing, usually from the European officials, and at times of referenda - from domestic politicians - that the EU and the euro are the drivers for growth and prosperity. Even today, in his op-ed, ECB chief Mario Draghi referenced euro as a driver of prosperity.

So let's do a simple exercise, take pre-crisis peak and history of growth in nominal euro area GDP and see where would the region have been if it were an 'engine for growth' comparable to relatively weak G7 states (A2), other advanced economies ex-G7 and the euro area (A1), and 1990-2009 world growth average (A3). 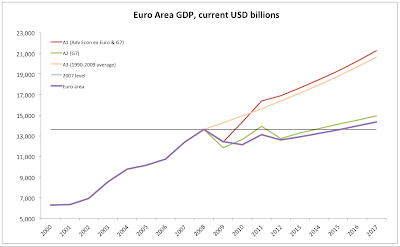 Here's an interesting fact: the advanced economies ex-G7 and euro area path, even after the crisis is factored in is almost identical to the world growth path. But the euro area path is underperforming the G7 path by 2 years in terms of regaining the pre-crisis peak.

Note: all data is taken from and/or computed on the absis of the IMF WEO database.

Caveats are many - this is hardly a deep analysis, so be warned. But by any comparatives, this does not support the proposition of the euro area as an engine for growth.

Let's do another mental exercise. Suppose we ignore the fact that euro area actually expanded since 2004 in terms of membership 9adding very insignificant overall boost to the region GDP of 1.5-1.7%). Assume that post 2004 there are two possible growth rates that apply:


Here's where the two assumptions lead us: 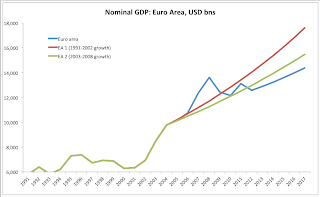 Again, where's that engine for growth?

Please note: the argument that 'absent euro things would/could have been much worse' is vacuous. We don't say Mercedes AMG is an 'engine for speed' by implying that it delivers non-zero speed. We claim this by comparatives to other functioning vehicles. 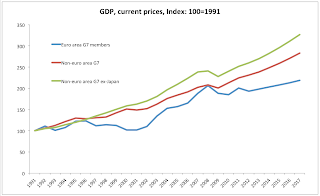 Obviously, an engine for growth should have at very least achieved some comparable performance for EA3 to that of its peers? Err... not really. And worse, taking 1999 as a base date (the year of EA3 adopting the euro officially) yields very similar qualitative results.
Posted by TrueEconomics at 8:43 PM