Another interesting chart from The Great Leveraging, by Alan M. Taylor, CEPR DP 9082. This one shows “Excess” Credit Growth (in other words the extent of credit contraction during the crisis) and the Paths of Real GDP in Normal (blue line) and Financial Recession (red line) Contingent on Initial Public Debt Levels. 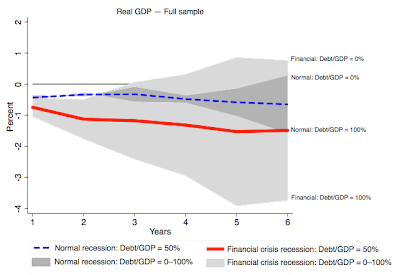 Here's Taylor's own explanation: Figure 12 from work in progress (Jorda, Schularick, and Taylor, forthcoming) studies the impact of a similar "marginal treatment" [shock of 1% per annum extra loan to GDP growth during the expansion prior to the crisis over an above normal long run levels of growth - and recall that in Ireland's case this rate was probably 3-5 times the shock considered by Jorda et al], subject to starting Government debt/GDP ratio condition (taken as 0% of GDP to 100% of GDP). The central forecast lines - solid lines - provide for assumed 50% of GDP starting assumption for public debt to GDP ratio.

This is serious stuff, folks. In effect the chart above shows that, had Ireland entered the crisis with, say 80% Government debt/GDP ratio, we would have been losing some 2.03% percent on average annually over 6 years. Funny thing - we are, so far on track to exceed this number.

Many say we had a very enviable, low Government debt to GDP ratio at the onset of the crisis - officially - at 44.23% in 2008. Alas, that is platitudinal bull when it comes to hard reality. The problem for the argument involving the 44% figure above is that starting with 2008, Ireland promptly loaded onto the shoulders of the Exchequer massive banks debts, which have pushed Irish Government liabilities up by at least €67 billion, or well above 90% of GDP. Not all of this was taken as debt (NPRF funds) and not all of this was taken as immediate debt (with banks recaps running into 2011), but as far as resources available to combat the crisis go [something that low Government debt at the onset of the crisis should have allowed], banks resolution measures exerted direct drag on Irish Exchequer capacity to use low initial debt levels to fund transition out of the crisis. In other words, as the real data and comparison of it to Taylor's results show, the idea of our low initial starting debt levels being a boom to our situation is bollocks.

Thus, in terms of the chart above, we are closer to 80-90% starting point for debt/GDP ratio for the onset of the crisis period (thanks to Brian Cowen's Government efforts). Which implies that over the 6 years horizon of the crisis, we should expect a cumulative decline in the economy GDP of ca 12%. The fact that over the last 5 years we have seen our GDP declining by 9.52% (using IMF data and 2012 forecast) means only one thing: more pain is yet to come.