Time to get outraged, folks. Per latest CSO annual National Employment Survey, public sector pay is completely beyond any reasonable comparatives with the private sector. Here is a table (courtesy of Davy - yes, credit is due to Davy for an excellent note on this): 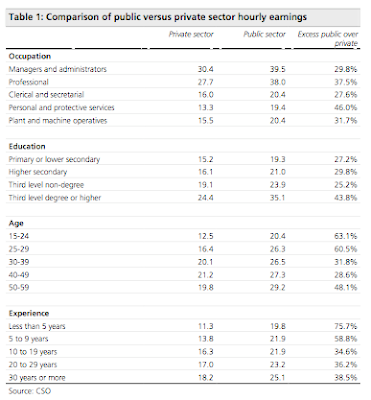 "Median earnings were 52% higher in the public jobs", said Davy. "or the equivalent occupation, education level or experience, the smallest gap is 25% and the largest is 76%. The gap between public and private pay cannot be justified by saying that public sector employees are more
experienced, better educated or do different jobs. For example, how can we explain the fact that security personnel in the public sector get paid 46% more than their private sector peers?"

Workers with 20-29 years of experience achieve a wage that is 36% higher in the public service
than in the private service. What does this mean? It means that the actual gap for those with greater tenure is even wider than that because workers in the private sector in this category of experience have to save 25-30% of their disposable income in pensions, while their counterparts in the public sector are enjoying lavish retirement plans benefits.

Davy note: "In February, the first attempt was made to rectify the imbalance. But the public pension levy only matched the wage cuts in the private sector, so the gap has probably
not closed. The public pay bill of €20bn in 2009 amounts to more than one-third of voted public expenditure. Further pay cuts of at least 10% are justified by these data." Oh, dear - can't we actually have some ambition? These figures show that public pay bill should be cut by ca40-45% through an equal measure of reduced wages (-25-30%) and reduced numbers employed (-20%). This will still produce a public sector employment premium, but it will at the very least force them to work more productively.

Davy concluded the note with the following statement: "Hourly earnings are 48% on average higher in the public sector. But average annual earnings are 32% higher because public employees work fewer hours. But it is not the case that bonuses are much higher in the private sector. In 2002, bonuses (and benefit-in-kind) in the private sector amounted to €1565 (or 5% of average annual earnings) versus only €149 in the public service. Five years on in 2007, bonuses in the public service had almost caught up at €1,807 versus €2,211."

Another interesting fact is the distribution of various grades in private and public sector. Notice the relative proportions of managerial and admin staff vs professional staff. This is not a sign of the public sector depth of expertise (high ratio of professionals), but of inflation in terminology. When an elementary school teacher or a basic nurse are considered professional grade employees, academics should be called demi-gods... 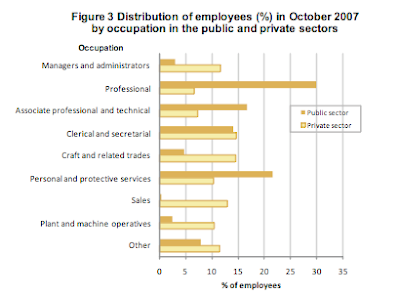 What all of us are forgetting is that as taxpayers - we employ them, not the other way around. It is time to start issuing pink slips. And by the way - if you hear once again anyone talking about 'not creating a conflict between the two sectors' - guess what: by granting themselves these gratuitous increases in wages, they - the public sector - have taken hard earned money from all of us, rich and poor. It was an involuntary transaction that enriched them alone. The state has presided over this system of wealth transfer under the guise of Social Partnership. We have every right to demand our money back. It is conflict time!
Posted by TrueEconomics at 6:29 PM

I disagree with one comment which I believe to be inaccurate.You state:

''What all of us are forgetting is that as taxpayers - we employ them, not the other way around..''.

The State not taxpayers employs public servants.The tax base from which their wages are paid is much wider than just the taxpayer,it includes VAT,CGT etc.

The wider issue you raise of the distribution of wealth is I believe more appropriate because all Irish citizens are theoretically sovereign holders of all state wealth as per the Constitution.

For instance guaranteeing bank bonds is theft of Irish citizens wealth in favour of a cabal of fifth columnists(bankers).
The granting of social welfare to immigrants ,both legal and illegal within a short perion of time in Ireland is destructive of Irish wealth.
Social welfare rates and benefits which approximate hourly rates of pay higher than the minimum wage is destructive of Irish citizens capacity to earn a decent living.
And so on....


The primary problem,as I see it is one of governance or in the present circumstances the lack of it.Resolute government would have faced down the unions and all the other lobby groups which are destroying the governing structures of the State.

You are right the Public Sector seem to write their own paychecks. I did not believe how fast and how much salaries in this sector increased until I looked at some actual figures for a friend in the Civil Service. The basic salary in april 2002 was Euro 46,000 and currently is Euro 100,000 and there also extra allowances for this and that paid on top.These are actual figures and there is no promotion involved during the period. There is this stupid incremental salary scale which is a real winner for the Public Sector. You are either qualified or not when you join and
why should anyone be paid increments. Pensions are guaranteed and paid based on these inflated salaries.

Yes, you are right, both Public Sector numbers and their wages have got completely out of line. Even a 'mandarin' could fathom that 50% is way out of line.

Whither that benchmarking was actually a REAL benchmarking process. Public Sectors across many countries are less efficient than their private sector equivalents, we know that, and more costly, BUT there are degrees of inequity. Ireland's case is a particularly bad one.

The Pharoahs ran a slave system back in Egypt millenia ago, yet WE have a system which has elements of that, if not slaves in name.

Granted, we do have to recognise that Public Sector workers DO provide some level of service and in many cases much needed services. But the nettle has not been grasped by many governments for a long long time in terms of increasing productivity, and efficieny. Now as a state we are borrowing to pay for PS workers. Its a joke that any 4 year old would laugh at.

Private Sector workers have the choice though through the ballot box to rctify the problem and prevent it in the future. And if the choice isnt there with current poltical options, to manage the public sector appropriately, the private sector needs to create that choice.

At the end of the day, the disparity is but a manifestation of the lack of voting skills that the private sector have demonstrated. Whether the private sector knew it or not, by proxy in this limited 'democratic' system, this is the result.

Sean, Constantin is right. The private sector taxpayers (not only income tax, but ALL taxes) are paying for the public sector. The only source of government income in whatever way it is dressed up or labelled is a TAX.

Governance is a problem, but we (the people) choose our system and the governers. In this case, we get what we vote for, and if we dont like it, vote something else. So, we cant give P45 slips, all we can do is use our voting slips.

I disagree with your statement..

''The private sector taxpayers (not only income tax, but ALL taxes) are paying for the public sector.''


There are several tax subheads including CGT,VAT,excise duties,stamp duties,property registration fees etc.
Payment of Public sector employees comes out of a general pool of revenue from all tax subheads.
For example tourists pay vat and other taxes,MNC's (foreign corporations)pay taxes and neither of these are private sector taxpayers.

The state employs PS employees.In stating as you have that private sector taxpayers are paying for Public service wages the implication is the private sector must have the right to fire them.

The focus ,I believe should be on proper governance.Where I despair is that I see little prospect of that from any of the opposition parties and none from the ruling FF party.

Great post Constantin, thanks, we're well down the road to hell...

> There are several tax subheads including CGT,VAT,excise duties,stamp duties,property registration fees etc.
Payment of Public sector employees comes out of a general pool of revenue from all tax subheads.
For example tourists pay vat and other taxes,MNC's (foreign corporations)pay taxes and neither of these are private sector taxpayers.

It is the paymemnt of VAT and the other tax subheads by the private sector (including MNC's) that pay for the government spending (and by definition state employees).

> In stating as you have that private sector taxpayers are paying for Public service wages the implication is the private sector must have the right to fire them.

They do pay for their wages, but I'm not saying they have the right to fire them. Private sector individuals only have the right to vote for people (governments) that have the power to control the numbers and the wages of the public sector. And they only get a chance to exercise that right every 5 years or so.

So, I agree, it is abouit governance, and not about individual public workers versus private workers. It should not be a case of Us versus Them. But even when the central bank mandarins can write today in their report that public sector spending in relation to public sector income (all taxes) is out of line, it is well past the stage of being obvious to the dogs in the street. We (state) is living well beyond its means (income).

Yes, we have to rely on governance to change that as the public setor workers are NOT going to 'fall on their own swords' and voluntarily take pay cuts, admit that they should be working harder and more efficient, and many of them take redundancies. Turkeys do not vote for Xmas.

A friend of mine was recently turned away from the Dole office, as they had run out of money. he was told to come back in a few days. This maybe just the begining. The party is over, and the parasites feeding off the taxpayers are now left out in the open for everyone to see. This is the only plus, in an otherwise complete and utter disaster for this nation.