Over the next few days I will be posting my thoughts on NAMA legislation. But here is a quick first installment:

A search of PDF document reveals that:
6. "30.—(1) As soon as practicable after the establishment day, the Board shall establish 3 committees, and appoint members to them, as follows: (a) an audit committee; (b) a credit committee; (c) a risk committee." There is no independent committee membership requirements, with all, save two members of each committee appointable by the Board of NAMA, and the remaining two - by the Minister.

"31.—(1) The Board may establish such advisory committees as it considers necessary or desirable to advise it in the performance of its functions. ...(4) The Board shall determine the terms of reference and procedures of an advisory committee." There will be no statutory requirement for independent oversight of NAMA - cronies run cronies' loans.

7. "Indemnification of members of Board and officers of NAMA, etc. 32.—(1) This section applies to the following: (a) each member of the Board; (b) each officer of NAMA; (c) a director of a NAMA wholly owned subsidiary; (d) a director of a NAMA group entity; (e) a member of the staff of the NTMA. (2) A person to whom this section applies is indemnified in relation to anything done or omitted in the performance or purported performance or exercise of any of NAMA’s functions or powers under this Act, unless it is proved that the act or omission was in bad faith." So the incompetence can never be penalised - a standard practice for Mr Leniham's pets in the public sector.

And a succinct summary of the legislation (hat tip to Richard W): 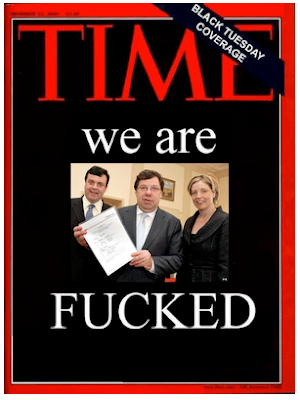 More to come, so stay tuned, but this already bad enough...
Posted by TrueEconomics at 8:14 PM

This corresponds with my impressions from glancing that bits of the document.... The whole tone of the document is wrong, its about protecting insiders. No regard for the interest of taxpayers....

Given our experience with the guarantee, where it emerged that corruption and fraud was rife in Irish banking....Of course it emerged when it was too late to do anything about the guarantee...but whole institutions should have been thrown out of the scheme.

It appears the establishment are hell bent on making the same 'mistake' twice... I bet corruption and fraud will be uncovered after NAMA is setup but by then it will be 'too late to change'...'Nobody saw it coming'

A: Does the government expect to see property prices back up to levels seen from 2002-2007 (another bubbles) in 15 years time?

B: Does the government expect fields with half built developments / ghost estates in Roscommon, Longford, Cavan to generate an income in 15 years time?