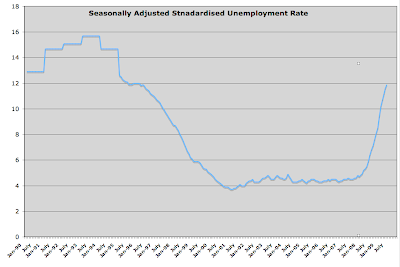 Unadjusted change in LR for males between May and June was +10,302, for Females +11,419 so we are now seeing female unemployment moving ahead (in rates of growth). This shift was evident in both under 25 year olds and 25+ years of age categories. The new risk to household solvency now comes from second earners starting to lose jobs at a faster pace. 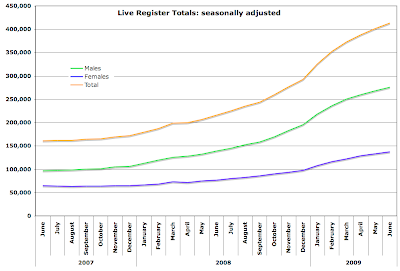 When looking at weekly changes, chart below shows clearly the renewed pressure on employment. Clearly no 'green shoots' here. 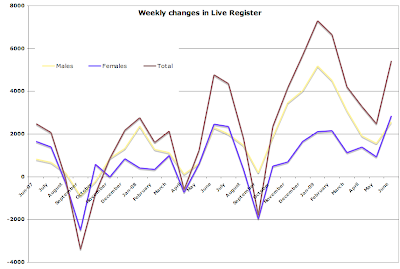 Posted by TrueEconomics at 11:07 AM

Hi Constantin - we corresponded briefly early on this year re NAMA.

Since then I have been asked to come up with a single sentence 'that you could use to explain NAMA to your grandmother'.

Does the following fit the bill in your opinion:
"NAMA intends to use the taxpayer to bankroll the developers and banks excess inventory of property so as to forestall, in the short term, a catastrophic collapse in property values in the hope that, in the long term, lower losses or even a profit might be achieved."

A simple yes or no will be gratefully recieved

A simple 'Yes' but a small correction perhaps?

"NAMA intends to use the taxpayer to bankroll insolvent land speculators, developers and banks so as to reduce, in the short term, adverse effects of a catastrophic collapse in property values on their balance sheets in the hope that, at some point in the distant future, some of the public losses can be recovered back to the State, with little hope for any return of these to the taxpayers themselves."

Alternatively: NAMA is a shell-game scheme that will defraud taxpayers of their hard-earned money, release defaulting reckless speculators, developers and banks from their liabilities, while, potentially, enriching the public sector in the log run.

An even shorter alternative: NAMA is a robbery of taxpayers perpetrated by the state on behalf of some banks, property developers and speculators.

Ah and per tip by PMD, to explain how NAMA will enrich our public sector:

Once the proceeds of NAMA are collected, there will be a disbursement of 'surplus' value to the public sector in higher wages and more employment. This will be done simply as follows:
- in 15 years time, any remaining value of the bonds outstanding will be X, which will be less than the original amount used to finance NAMA by the amount of total repayments on bonds to-date;
- the value of properties still held in NAMA will be Z
- the amount of Z-X will be the 'surplus' over and above what remains to be paid out under NAMA liabilities;
- this 'surplus' will be captured by the public sector (i.e not disbursed back to the taxpayers) in the same way as we have paid them fiscal surpluses of the Celtic Tiger era.

Just like your correct observation that the GDP figure does not represent the true picture of our economy (or indeed ghat of many other countries), the Live Register data doesnt reflect the state of unemployment or the rate of job loss nor the reduction in job 'quality'.

The Quarterly Household survey is a more accurate reflection, but like any (n=?) survey, it has its discrepancies as well.

All we know is that this economy is falling like a rock through water at the moment, whether we can accurately measure that or not is immaterial in the general gist of things.

We need to concentrate on solutions. Thoughts?

MK1 - you are right - QNHS is a survey-based approximation, but it is the official unemployment stat for Ireland.

As far as GDP goes - Ireland, Luxembourg and a couple other smaller open economies are in the same boat - GDP is not a true reflection of national income because it contains transfer pricing activities by the MNCs. It just happens to be the case that Ireland has the greatest GDP/GNP gap of all states I know of.

Perhaps more ideas can come from you guys - post them here and I will start compiling a list?