For those who missed my Sunday Times article last, here is the unedited version. For more on education premium in Ireland see my Long Run Economics blog here.


Remember the wave of protests hitting the streets over the withdrawal of the automatic entitlement to the senior citizens’ health cards – a benefit worth some €2,500 per annum for a well-to-do family of two? As the Government studies this month’s report on the options for the reintroduction of third-level fees, the prospect of taking out some €5,700-7,300 from the already stretched middle classes has to be an equivalent of a nightmare in our Ministers’ heads. Unlike the elderly, these are the same families hit hard by Minister Lenihan’s tax war on Ireland Inc.

Politics aside, this level of radical pain therapy would be warranted were it to deliver improved quality of education. Alas, the plan is so fundamentally flawed that one must wonder if serious economic impact assessment of its proposals was even attempted.

The Department of Education report suggests, as a clearly preferred option, setting fixed fees of €5,715 for arts and humanities students and €7,272 for nursing and engineering. While these differentials somewhat reflect the variation in capital between the two broad categories of programmes, these are hardly sufficient to establish proper pricing of education. Neither do they recognise the differences in the costs of non-capital inputs, such as faculty salaries.

In other words, the idea of fixed, uniform pricing independent of quality or institution’s ability to attract top internationally competitive students and faculty is about as daft as charging a single price for all cars. Do this, and within years you’ll get an overpriced mediocre labour force.

Two features of the Irish market for education amplify this negative effect of fixed pricing.

The first feature is extreme over-proliferation of third level institutions. In normal circumstances, when price reflects quality differences between competitors, the markets regulate the new entries and the survival of the incumbent colleges, institutes and universities. But absent pricing mechanism and with politically motivated education expenditure allocations you get a competition driven by the race to increase numbers of degrees awarded. A race to excellence is replaced by a race to graduation and grades inflation. Do we, as a nation, want certified mediocrity for the indigenous labour force? If not, we should allow our universities to charge a market rate for their services.

The second feature relates to the market for education. For all our talk about the knowledge economy Irish wages are driven primarily by tenure. Per latest CSO data, released last week, even at the peak of the boom in 2007, Irish workers collected low earnings premia per each additional year of investment in education compared to tenure. Chart illustrates. After-tax real annual earnings gains from moving from post-leaving cert level of education to a 3rd level non-degree education are lower than those from staying in the workforce. This is true for all types of potential students, with exception of mature female students. A picture is better for those planning to invest in a full 3rd level degree or higher, but even here the premium earned falls below the price to be charged under the proposed reform. That was before the latest decimation of jobs, wage rates and bonuses associated with the current recession. 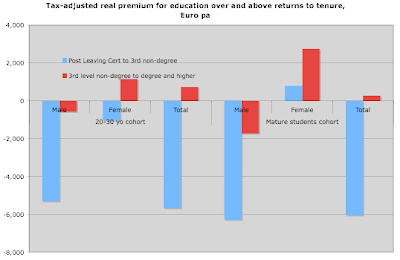 In other words, given the labour market-enshrined system of tenure-driven rewards, education does not really pay in Ireland. Staying in the job does. This is likely to explain why on average more educated EU15 foreign nationals (excluding UK and Ireland) have earned some 9.6% less in hourly wages in 2007 than their Irish counterparts. For males, the same number was a whooping 14%. Per CSO data, not a single sector in Ireland yields an education premium in excess of the upper marginal tax rate other than our knowledge-thirsty public sector. And even there, only females earn such a premium.

This makes it even more crucial for the reform of education financing to be focused on long term objective of creating a functional market pricing of human capital – skills, schooling and aptitude. On a deeper level, such a reform should be linked with a rapid shift away from the system that rewards tenure and taxes heavily educational attainment and resultant skills. In other words, we need more after-tax wage inequality based on skills and educational attainment differentials before we can charge a real price of education. But at the level of education reform itself, we need a system of fees that differentiates between degrees of varying quality, incentivises student effort and merit.

The main mistake of the proposed fees system is that it sets singular pricing for all degrees independent of quality or the variations in the demand for specific degrees in the market place.

For example, if the country is experiencing a reduced supply of engineering and hard science personnel, as FAS and Forfas have asserted on so many occasions, surely we should witness a combination of lower fees (due to smaller demand for admissions from the potential students) and higher wages emerging. Under the latest Department of Education proposal, we will get exactly the opposite.

Similarly, if our two world-class institutions, TCD and UCD, were to offer their degrees at the exact same price as those offered by less internationally recognisable schools, this society will be underpaying for their services and overpaying for lower quality universities and schools. This is hardly a system that can be expected to yield economically and socially efficient outcomes.

Bizarrely, our education mandarins claimed in the report that allowing institutions to vary the price of admission can lead to some charging “excessively high fee rates, perhaps resting more on reputation than service”. This is economically illiterate and smacks of an outright manipulation of the market.

The second grave mistake is not to create a fully diversified and functional system of state-supported lending for tuition fees coverage and merit-based grants. Such a system, for obvious reasons, should be accessible only to the children of Irish citizens and long-term (8-10 years plus) residents. It should be coupled with a University-driven system of own merit grants open to all candidates to attract star applicants from abroad.

It should also work seamlessly with the means-tested system of supports. The much-lauded Australian option (or Option 3a in the report terminology) will simply not work for a small open economy like Ireland that is a temporary migration attractor within a much larger EU. Judging by the fact that the Department of Education expects the cost of running the scheme to be roughly equivalent to only 3-4% of the set up cost, I doubt they counted on the potential education tourism and skills drain to be of any significant magnitude.

And yet, our own Government expects some 150,000 Irish people to leave this country in the current recession alone. How many of these new emigrants will carry with them above average levels of education attainment is an open question. However, were we to have the proposed fees system in place today, the Government migration solution to the crisis could be washing away some €800-1,200mln in educational investment out of the country.

The last error of judgement by the Department of Education is to address the issue of fees separately from the overall financing of academia. Even assuming that our mandarins’ numbers stand up to scrutiny, there is no added certainty as to the future income for the academic institutions in this country. How much of the current funding will the fees replace? How will the fees revenue be distributed across various institutions? Who will be responsible for financing of uncompetitive institutions? All of these and other questions remain unasked. Which suggests that the fees reform will be nothing more than a plaster on a gapping wound that is our system of education.

Box-out: This month’s ECB Bulletin on the Euro area economy included an interesting model for estimating the sovereign bond spreads as a function of public debt to GDP ratio, public deficits, the volumes of bond financing required in the future, past yields and the measure of international financial markets’ willingness to accept investment risk. The original ECB estimation was based on the yields history for 10 Euro area countries, including Ireland. Recalibrated forward to reflect the expected changes in our fiscal position in years to come, this model predicts Irish bonds spreads over the German bund to increase by roughly 40-50% through 2013 assuming NAMA bonds are held off the public balance sheet and have no impact on the market demand for our bonds. Under less favourable conditions, with NAMA bonds entering public balance sheet and demand for Irish bonds falling to the level where the ECB becomes the sole purchaser of bond, market yields spreads can rise by some 200%. Drastic, but feasible.
Posted by TrueEconomics at 8:07 AM

A lot of things bother me about this proposal too. As usual, my main complaint with this government is how badly things are thought through, and how nobody seems to ask basic questions. I suppose the "grown ups" know best.
The first potential problem is a brain drain.
Does the introduction of this fee make college in Britain competitive? Are these kids more likely to get poached by British colleges well placed to offer our best students scholarships? Our students abroad are likely to stay there, especially if they are in a dynamic city.
A related problem is emigration where people decide to move away when they see a new tax rate about to kick in. It may not force many to move but it will surely be a consideration when job offers are being evaluated.
The third problem is fairness. Vast numbers of people have benefitted from the current free system. They will escape having to make any payment at all. I am not advocating a tax increase, but if logic holds that people with degrees earn more, then we are already paying extra because of our educations.
The fourth problem is, how long it takes for revenue to come in? This will take years to feed in to the system.
The next issue is, Will the colleges actually get any of this new money? It will probably go in to central funds and a portion (but not all) will go back to the institutions. Then, when the next recession hits, even that will be cut again.
Finally, who is going to run this arangement? Don't tell me it's another damn quango!

I was chatting to a few (6 to be precise) very bright students just yesterday. These guys and girls average As and Bs thro' secondary and are aiming for Hi Tech careers. Without exception, not one want to do their university degrees here or at least aim to be out of Ireland asap. They have reviewed the courses and the local conditions and as far as they are concerned, they have done their bit by performing well at school. They are not about to get ripped off. It's a no brainer