So NAMA... where can it lead us? This is a question I tried to answer for today's very engaging event. I would like to thank all the participants in it for having such tremendous patience to sit through my presentation.

Those of you who attended would remember a comment from the audience that Ireland has a debt overhang on the private economy side and that NAMA is justified as a form of correcting it. This is, in my view, the singular most problematic issue raised for five reasons:
Hence to argue that we must support NAMA because we have a debt problem in this country fails on five fundamental principals: logic, economic and financial efficiency, non-discriminatory action by the state and political and ethical legitimacy. It is deeply immoral and has not a single rational point in its favour.

So here are the slides... 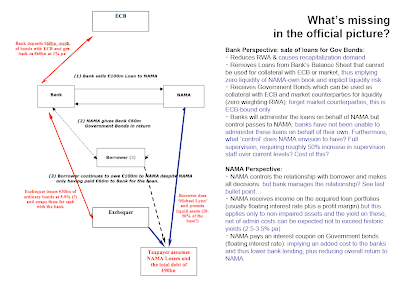 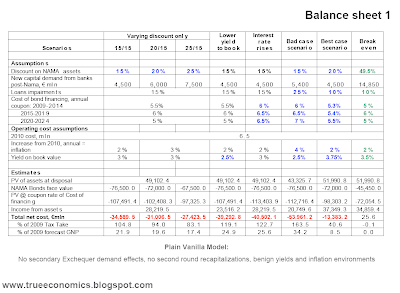 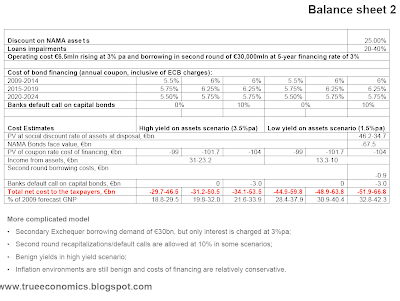 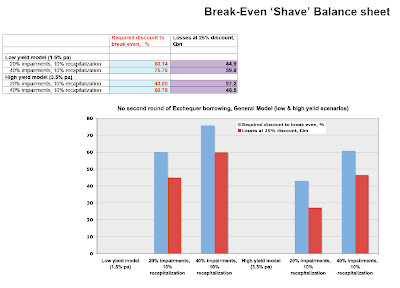 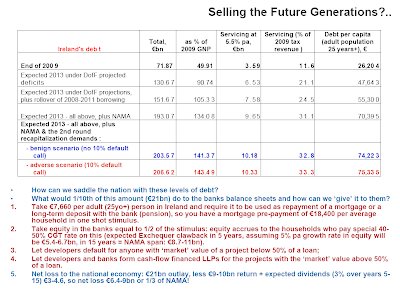 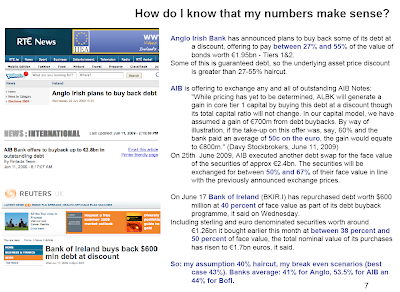 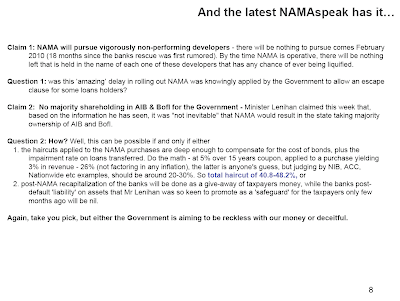 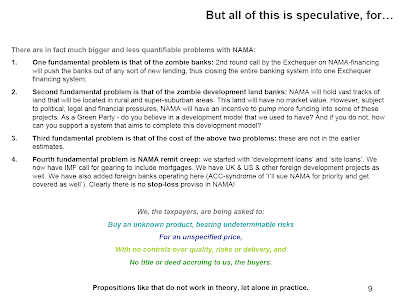 Posted by TrueEconomics at 7:16 PM

Yes, you are right, NAMA is a vehicle to shore up the failed risk taking in the past of private institutions and a select few companies and individuals and to be paid for by the taxpayers from this year onwards (or indeed since the state guarantee was given) and in future years.

It is completely unfair.

Those that are not getting a fair whack have only one method to affect change, and that is through the power of their own vote.

And if people are vexed enough, they should campaign for the option to exercise that vote power sooner rather than later. People do feel powerless BUT they have the power at the end of their pencil, presuming of course that the options on offer represent the way they want things ran!

Thanks for the presentation. It is one thing to put the entire bill on taxpayers. That is happening. But to put an even greater bill just so that banks can continue to make profits is a step too far.

Yes, James, I agree. What gets me is that as you've said correctly years ago in Irish press, all of this was coming, it was supported by the idiotic policies that kept inflating the bubble through tax system, and yet here we are now, about to impose a property tax on the market that is not getting off its knees any time soon... Continuously compounded recklessness of our politicians. And Irish Times desire for higher taxation supplies an asymptote to it all.

Hi Constantin,
This is an impressive piece of work, but unfortunately I lost the logic in many areas when studying your charts. I realise these are illustrative slides which were accompanied by a lecture, but is there any explanatory text I can refer to for guidance?
Thank you.

Did they "get it" tho, the greens?

Getting the opportunity to Vote early would be great. But would the alternatives do anything different? I suspect not.

The best way of voting is to either walk away from this land and put your money and business with a non-Irish bank.

You seem to be more animated than native-born citizens on the point that NAMA is immoral, if not unconstitutional.

The poster MK1, among others, is happy enough to accept this rape of the tax payer, so long as we vote better the next time.

If any other electorate in Europe, nay, the world, faced this scandal, their citizens would be on the streets! The Irish have no character.

Still, there might be hope, if some of us can pool resources to challenge the NAMA Bill. Any other takers out there?

Paddy: You seem to be more animated than native-born citizens on the point that NAMA is immoral, if not unconstitutional.

The poster MK1, among others, is happy enough to accept this rape of the tax payer, so long as we vote better the next time.

No Paddy, I am far from happy and I have been SHOUTING it from the rooftops too ever since the so-called free guarantee came in last Sept.

Let me make my stance clear:
"Our" banks are not systemic to the Irish economy
The bank guarantee should never have been given
The Irish government should only buy stressed assets and institutions at market rates (which by implication means no NAMA bailout).


Its simple, the banks have been creaming it off Irish business and society for decades with their quasi-duopoloy market position, they have not been charities. As Bernanke said yesterday, bailing out these banks is sick. We should have let the sick banks fail, and let other European banks come in and provide a banking service.

In other words, let private enterprise live and die competition as it should, and those risk takers that took failed risks, let them fail. Fail, not Bail.

Remember the mantra, Lance That Boil (which is our sick banks).

And shout it from the rooftops!

If anyone proposed any other solution we would be able to see many downsides to it also. There is no getting away from downsides.

Those developers that can repay their loans will provide a profit for NAMA because they will be receiving a higher rate in repayments than they are paying out through a variable rate Government Bond which the banks can cash at the ECB.

Those developers who cannot repay their loans will forfeit their assets (i.e. land) to NAMA, to the state, to the citizens of the country. What will we do with this land? That I think is the key question. Any thoughts?