More on yesterday's Quarterly National Accounts data. Here is the snapshot of the widening GDP/GNP gap in Ireland - a clear sign of rising weaknesses in domestic sectors: 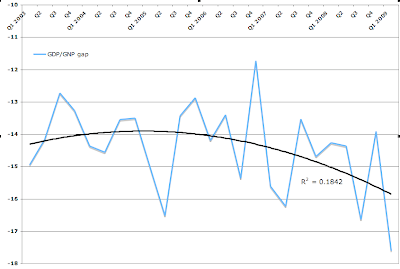 Note the trend peak in Q1 2005 and the absolute peak in Q4 2006. The first one corresponds to the end of post 2001-2002 correction and the latter to the SSIAs craze sweeping the nation.

Next, to the sectoral contributions to GDP. 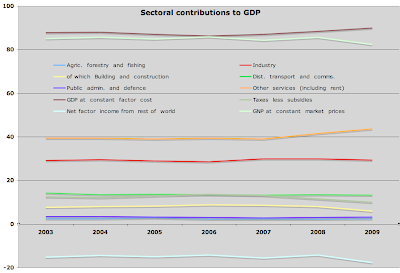 Our earnings from abroad are negatives and rising in absolute value - those Bulgarian and Romanian properties we've snapped up. Agriculture is overall the least important sector when it comes to GDP contributions. It used to account for 2.54% in Q1 2003, it accounts for 2.51% today (an increase from 2.33% a year ago). I wonder if that yoy increase captures the pumping of dioxins subsidies to pork producers. That was something, as the gravy trains go: Irish pork industry is worth €385mln pa, but in December last, the Government doled out €180mln to the industry in compensation for a one week stoppage (worth just €7.0mln in economic losses).

Then come Public Administration (up slightly from 3% an year ago to 3.25% this Q1, with another pesky side to it in the form of continued inflation in the sector).

For what it's worth as an intellectual exercise, were we to invest all overseas property money back in the country, while shutting down:
Of course - this is just an accountancy exercise, not a real economic policy, but it does put into perspective the fact that we have a sector accounting for just 2.5% of the economy and yet commanding its own Department with thousands of bureaucrats in employment...


Expecting the expected: US Consumer Confidence has taken a fall, once again, proving that the previous 'rebounds' were just a temporary mathematical correction before new jobs losses and continued weakness in the economy feed through to consumer sentiment. US consumer confidence fell to 49.3 in June from a downwardly revised 54.8 in May, the Conference Board reported Tuesday. Following a large confidence jump in May, consumers grew more pessimistic in June about their present and future. The present situation index declined to 24.8 in June from 29.7 in May, while the expectations index fell to 65.5 from 71.5. Note that the change in expectations was largely in-line with current conditions move, signaling that the US consumers are not exactly treating the current deterioration as temporary decline on significant May improvement.

A lesson for Obama? Don't give tax breaks to the elderly and the poor - give them to the middle classes. Last month improvement in personal income in the US was almost entirely due to Federal tax rebates to the elderly and the poor. This might be fine in the economy that is running at around trend growth, where consumption of non-durables is a problem, but it is not as efficient as a middle class tax break in the economy where precautionary savings are a problem.

A lesson for Ireland? Given that our own economic conditions are much worse than those in the US, and given that the government tax policies in Ireland are intirely internicine, I doubt we can expect significant gains in consumer confidence in months ahead. Instead, we should expect a new wave of layoffs to hit in Autumn 2009 and then again in January 2010.
Posted by TrueEconomics at 7:53 AM

The contribution of our Agri/Food sector shouldnt be belittled. There are numerous knock-on 'value chain' effects and its gross contribution to our GNP measured in both monetary and employment terms is probably a lot more than 2.5%. eg: services supply Agri, as does 'industry'.

Sometimes the slicing and dicing and measuring of whats going on can obfuscate and mask whats really happening on the ground. I would hazard a guess that Agri/Food is contributing far more than 2.5%. Perhaps a more detailed treatise/study is required or has been done.

I'd be also interested in seeing what proportion of local food retail it impacts as well.