So we have June Exchequer returns. Pretty nasty stuff, though some say it’s all ok. Here is why I disagree:

Much of the effect in flatter declines in tax revenue was due to frontloading corporation tax (October 2008 Budget). Now, Government April 2009 budgetary forecast did not reflect the expected revenue from this source, so the windfall should have boosted the overall tax receipts in June. Hmmm... but we are still €188m or 1.2% behind forecasts.

What gives? Brian Leninham has unleashed a savage April 2009 mini-Budget (-1.3% of the national disposable income was expropriated by the State or Euro 1.23bn, split as 2/3 to income tax and 1/3 to Health and PRSI levies – the latter two not entering tax receipts on the Exchequer banalce sheet, but counted as income to Government departments, yet another trick by which our obscenely high tax regime is classified as a ‘low tax’ one) and June was the first month where all new changes (errr – tax hikes) were in. So consumers are now on a renewed push down in spending:

Excise duty down 11.5% yoy in June, as opposed to 8.1% in May – tell me that after the improbably strong fall in 2008 a new double digit dip is not a collapse, and I would have to ask you what you are having for a drink that’s so strong;

VAT was down 23.3% in June yoy – also deeper than the -21.2% average decline in a year to May (although these are not seasonally adjusted figures);

Income tax is down 15.6% yoy or 2 percentage points behind DofF estimates.

Net result: deficit is now at €14.71bn against revenue of €16.31bn. Chart below illustrates revenue trends in terms of monthly average receipts.
All of this, however, is beyond the main point - even if revenue is flowing in at the rate the DofF forecast - which seems to be the desired objective of all our observers, analysts and the Government, this revenue will be bleeding the real economy. There is no point of balancing the Government expenditure at the cost of killing the economy - which is what our Exchequer is currently attempting to do... 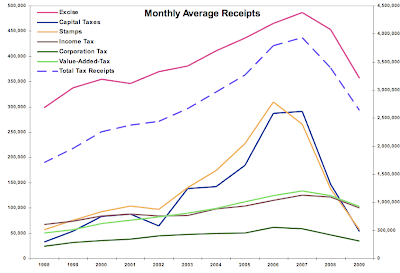 Posted by TrueEconomics at 11:55 AM