I am a skeptic when it comes to the idea of Fair Trade - an idea that on its surface suggests that we should use our preferences biases in the West to determine winners and losers in the trade game vis-a-vis the rest of the world.

Is Fair Trade Honey Sweeter? An Empirical Analysis on the Effect of Affiliation on Productivity is a recent (July 1, 2009) study from Leonardo Becchetti and Stefano Castriota (UofRome II) published by CEIS Tor Vergata, Research paper 141, Vol 7 Issue 1 (available here). The study evaluates the impact of FT affiliation on Chilean honey producers. "Evidence from standard regressions ...shows that affiliated farmers have higher productivity (income from honey per worked hour) than the control sample. Additional results on the effects of affiliation on training, cooperation and advances on payments suggest that affiliation contributed both to, and independently from, the economies of scale effect. Therefore, we show that the productivity effect is partially explained by the superior capacity of affiliated workers to exploit economies of scale."

In other words, what they do find is that FT link to productivity is a mixed bag. One issue - the beggar thy competitor effect of FT (scale) is certainly contributive to 'higher' productivity. As FT spreads over more and more producers, this effect will diminish. The paper controls for this effect.

Another issue is the price effect of FT - members of FT programmes receive higher prices for their products because we, consumers, are willing to pay that premium. This implies that per fixed number of units revenue of FT-affiliated producers is artificially inflated by our preferences. Again, should FT spread, this effect will also be driven down to nil. Interestingly, the authors report that in the case of Chilean honey producers, "The (wholesale) price of honey sold to the FT affiliated cooperative is obviously lower than the retail price, but surprisingly is also lower than the price paid by local, traditional and international intermediaries. Beyond the myth of higher prices, the most valuable services provided by FT organizations are price and demand stabilization, training courses, technical assistance (in this case, lab tests on honey chemical properties) and zero interest advance payments. The local retail price is lower for Apicoop’s members, thus there are no positive externalities of FT affiliation on their bargaining power with local buyers."

But the most interesting issue from my point of view is what is left as a 'residual' once the above two factors are accounted for. Controlling for selection bias, authors estimate the following relationship relating to output productivity:

and obtain the following results: 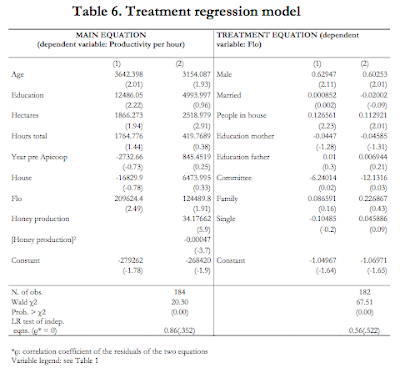 This is really exciting evidence from my point of view (and do recall - I am a skeptic): authors' "analysis on Chilean honey producers in a period of high market prices highlights that, beyond the fair price myth, non price conditions are much more important... More specifically, ...FT affiliation, in spite of an insignificant price differential in times of rising market prices, has helped local farmers to improve their productive skills across years. In this process more favorable financial conditions (advances on payments at 0% interest rate), internalization of Marshallian externalities via interactions among local producers and training courses are the distinguishing features with respect to a control sample of non affiliated producers which seem to have paid an important role."

Great stuff... but... "On the overall, our findings show that affiliation years significantly contribute to increase producers’ productivity by moving farmers above the inverse U-shaped average product curve in the sample. These results, together with those on similar projects lead us to believe that Fair Trade identifies the right path of action to promote inclusion of marginalized farmers in LDCs (even though not all projects have the same degree of effectiveness and depend crucially on management abilities of the local cooperatives). This is because they correctly identify that the problem at stake is not just one of underproduction but,
mainly one of market power, market access and capacity building. FT by definition offers a diversification of marketing channels, aims to address part of the premium to innovation and part to social needs and has the goal to strengthen local producer organizations and their market power in the value chain with respect to local transportation intermediaries."

What the hell does this mean? Well, it means that FTs greatest benefits are real, but some of these are also predatory vis-a-vis non-FT producers because:
On the net, the picture therefore is mixed. But I find it very interesting...
Posted by TrueEconomics at 1:58 PM

Fairtrade really hasn't made the dint in markets to start threatening other farming groups. If you take the world wide shopping basket Fairtrade is still tiny. I think the Fairtrade marketing slightly mislead the consumer that it was all about price. It is in fact all about the trading relationships and the training & the connections so they can become stronger organisations. Also in food anyway the price premium is disappearing fast on the rrp - which means that under developed markets like clothing are struggling as there still is a price premium which the consumer doesnt really want to pay for.