Well, in the week when the infantile reports from the CB and Forfas have delivered no news (just a mash of poorly cooked up secondary factoids) and the press interpreted the ESRI's dithering as a sign of the bottoming out economy... CSO's data for retail sales told a much more honest story.

Yes, pigs do not fly, unless propelled into the skies by someone else's design. And neither do the theories that the Irish consumer has finally decided to become this Government policies cheerleader. Retail sales have no completely collapsed, going for the double dip move. Let's say thanks for the lack of consumer support (even at already abysmally dismal levels) to our Brian+Brian+Mary 'Economics on Drugs' team.

A few charts on the latest data... They are pretty much self explanatory. 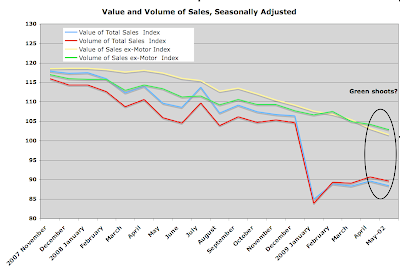 Tell me if need reading glasses, but my usual 20:20 vision can't spot any green shoots... At best - a bounce at the bottom, going into another down spiral? 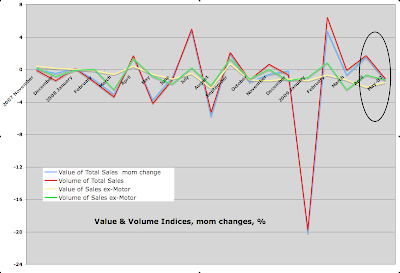 Yeah, about the only positive is that the monthly rate of collapse is slightly lower for value of sales... inflation cometh? Not quite. Not yet. But gas prices are biting... and a host of other state-led charges... and bars - oh yes, warm weather when even C&C should be able to make money (don't bet on it, for their problem is not the weather, but perennial stupor of the management team, or shall we make it 'pear-anneal'?).

Let me play a weather man for a sec... 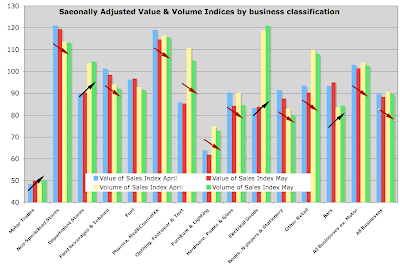 Again, aside from bars (weather effect combined with desperation and late night Government meetings) and Electrical Goods (either ESB was doing some frequency manipulations to help economy or good weather got few builders out for nixers and small jobs, thus small appliances purchases went up) not much of a Green Valley out there. 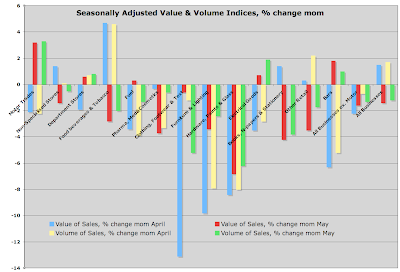 And, of course, the same is replayed in rates of growth... 11 categories show things getting worse and worse by the month in value terms, while 2 categories are showing an improvement - Motors and Bars... drinking and driving, anyone? Other 2 categories showing such a small improvement, that you might as well call in the crew that fixed the Hubble for super fine Green Weeds removal. Ditto on the side of volume.

May annual decline was 15.4% in volume terms an improvement in the average decline of 21% in the year to April. But this was driven by the slower rate of decline in motor sales – the sector that has been so thoroughly devastated in the past that continuous decline in it, even at a slower pace, still marks a deepening disaster: -40% down yoy in May. The figures mask a significant, and anticipated by this blog, deterioration in core retail sales (ex motors). In April, core sales rose 0.5% mom for the first time after a four months straight decline. At the time I remarked that this is a technical correction which will be followed by deeper falls. What I couldn’t have known at the time that the preliminary figure will be actually revised significantly down, so now we know that April marked an actual fall of 0.7% in core sales. This has now accelerated to -1.3% in May. Volume is now down 9.2% on annual basis – way down from the already historic 7.4% annual rate of decline clocked in Q1 2009. 3-mo MA also points to further declines ahead: in March, 3-mo MA stood at -7.4%, falling to -7.7% in April and to -8.4% in May.

Food sales – which should have been boosted by good weather, implying higher consumption of meats and other BBQ-items had another disastrous month falling 0.9% in May (mom) to -4.6% yoy. Ditto for clothing and footware – also items that should have been boosted by warmer weather. Instead of that ‘Special-K’ new red bikini, old T-shirts and shorts are out of the donations bins. So the category is down 5.2% in May mom. Pubs sales were up 1%, but this was not due to an improved weather, rather masking a slight statistical bounce on April’s horrific -5.2% fall mom (the category is now 11.4% below May 2008 levels).

This is a disaster unfolding in front of our eyes as the entire establishment – from Taoiseach to ESRI are blabbing about the ‘green shoots’. There is no sign of stabilization in the retail sector.

I like the frankness of the Ulster Bank note: “It is important to point out that we anticipated some weakness in retail sales in May, given that the tax hikes introduced in the April budget began to hit pay packets during this period. However, the May outcome was a bit weaker than we expected with downward revisions to the March and April data adding to the sense of a weak report.” Yes, let’s keep taxing the economy to avoid cutting public sector welfare, as Jack O’Connor suggests – it has been working wonders in improving our consumer confidence.

Posted by TrueEconomics at 8:59 PM