Per my earlier post today, here are some charts and trends for the Non-Irish contingent of the Live Register. 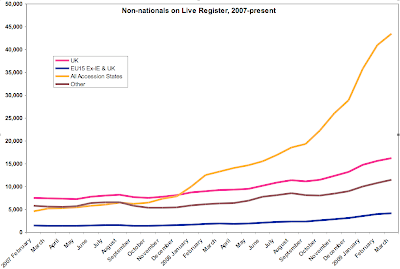 In terms of numbers on Live Register numbers, Accession States (EU27 less EU15) are by far predominant of all Non-Nationals. Some reasons why, apart from the obvious one that there is simply more of them than of other Non-Nationals, are:
(1) These are workers with less tenure (many came after 2004) and thus are cheaper to lay off. They might not be the least productive, but given our daft labour laws according protection by tenure, not merit, they are the first ones to go.
(2) Many of these workers are employed as quasi-skilled - they are still in on--the-job training and/or still developing their language skills.
(3) Obviously, majority were employed in Construction, Hotels and Hospitality, Retail Services - all sectors that experienced the heaviest fall off in employment. 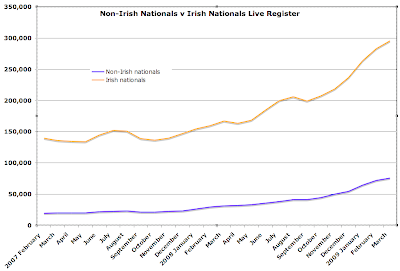 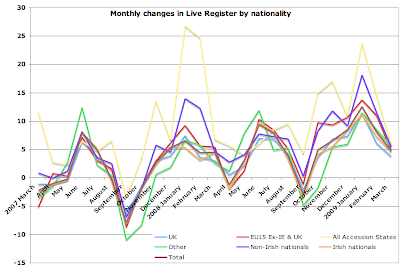 Finally, the last chart shows monthly rates of growth in Live Register signees. Again, all Accession States (EU27 less EU15) lead in rates of growth and in some cases - Q1 2008 being one example - with massive spikes. These are the signs of who is being let go first in this economy. Notice convergence of all categories to trend in March 2009. This is cyclical - following massive layoffs of January-February 2009 and will not hold in months to come as the next wave of layoffs is already ongoing. The next, most troublesome sub-category is EU15 (ex Irish and UK nationals) - the French, Germans, Italians, Spaniards and so on. These groups were not known to be occupied with 'dirty' work, preferring instead cushy jobs in professions, even public sector, and of course that welfare-heaven - EU jobs. They are being laid-off ahead of 'Others' (which includes Americans, Russians, Ukrainians, Chinese - all the 'rif-ruf' according to our immigration laws). Now, the 'Others' category does not cover students here, who are doing their post-graduate degrees and working part time, but do not qualify for unemployment assistance. Others, as well as the UK nationals are actually holding to their jobs pretty much as well as Irish nationals.

So, see, not all Non-Nationals are identical... an obvious conclusion.
Posted by TrueEconomics at 1:24 PM

A few observations which you may want to comment on.

1.It seems odd that at the beginning of 2007 there were more Non EU nationals on unemployment than immigrants from the Non accession states and also from the original EU 15.

2.A quote from the cencus of 2006 is revealing regarding one specific Non Eu nationality.

...''The percentage of Nigerians aged 15 or over at
work in 2006 was the lowest of all groups featured
at 38 per cent, though this splits unevenly between
males (50%) and females (30%). In comparison
with the other nationalities profiled, a relatively high
number were unemployed or looking for their first
job (31%)...''


The total number of nigerians recorded in the census is 16,300 whilst a total of 4,682 stated they were employed.

It appears from your graph and the above that a population of Non EU nationals are now permanently on social welfare and will never make a net positive contribution to the State.

...''I would suspect that tenure-adjusted, unemployment rates amongst non-Irish nationals are much closer to the Irish nationals than these numbers suggest...''

4.Non EU students are eligible to work 20 houurs a week.
Could it be that as immigrants from the accession states are more aware of their employment rights that employers are substituting them with student labour which will obviously be more compliant and will cost less.?

There is no cost to the employer,such as p.r.s.i.(as far as I am aware) in employing students.
As there appears to be no effective enforcement of regulation in this area could it be that this government policy of allowing students to work is in fact adding more Irish and EU nationals to the unemployment statistics?.

5.Finally,there was an explosion in employment of accession state nationals after 2004.
Could it be that employers substituted what would have been productive investment in machinery or other business with a higher added value .?
For example why invest in farm machinery when employment of a large number of labourers at extremely low wage rates was in fact cheaper in the short term for the employer.?

Anonymous, several notes here - I would be careful in interpreting the numbers for Nigerian nationals - many of them are in the process of legalizing their status here (asylum and refugee process, family re-unification process etc), so many are probably not eligible to work. They might want to join employment and might have requisite skills, aptitude etc, but might not be able to for now. I certainly have met many people from Nigeria who are gianfully employed, run their own businesses and are far removed from the welfare system (other than contributing to it via their tax payments).

In terms of substition against Accession States workers with students - yes, there is probably some of it going on, but again, we have to be careful in this area. Many non-EU students (including those from advanced and middle-income countries and those from developing countries) are legitimate and attend high-end third level and fourth level institutions. In many cases they work in the universities in research and teaching capacities. And they pay full tuition.

On physical capital investment side - as far as I understand our tax codes, physical capital investment carries much higher tax incentives than labour substitutes, so I am not sure your argument holds. An explosion in 2004-2005 in terms of Accession States nationals coming into Ireland was driven by 3 factors:
1) change in status of those who already were working here before ACcession;
2) construction boom; and
3) retail boom.
Not agriculture...

You are right to point out that certain employment/professions are effectively restricted to Irish citizens (actually, it goes deeper - to Irish nationals, with foreign nationalized citizens facing glass ceiling and doors on the way up and into these professions), but it is Irish public sector where such 'discrimination' is a standard practice.