First a bit of news
A birdie in front of my window has just chirped (hat tip to the birdie) that the ECB has tentatively signaled to the Irish Government that it will finance (largely? or in full?) the 'bad bank'. Under such an arrangement, the state will issue a sea of bonds - say €30-60bn to cover €50-90bn of impaired loans floating out there - and swap these for freshly printed cash from the ECB. Taxpayers get debt. Government gets pile of assets with default rates of, ughh say 20-25% (?). Banks get cash.

Why would the state go for this? Because if we price this junk at a fair market value, taking it off the banks will still leave us exposed to the need to recapitalize the banks. As they write down their assets after the transfer, the value of an asset will drop - from its current risk-adjusted (if only bogus) valuation of, say €0.90 per €1 in face value, to a fair value of, say €0.50, implying a loss of €0.40 per €1 in face value. This will chip into banks' capital reserves, driving down their core capital.

So the state will pay over the odds for the default-ridden paper to avoid the follow-up recapitalization call. This will sound like a right thing to do, but given that the taxpayers will be holding highly risky debt for which they have overpaid, it is not.

Second source of added liability comes from the nature of assets transferred to the bad bank. Banks have an incentive to transfer impaired consumer loans - the loans on which they have hard time collecting. So the state impaired assets pool will be saddled with near-default mortgages and credit cards debt. This is political dynamite, for no state organization will enforce collection on these voters-sensitive assets.

Why would the banks go for this? While getting rid of the troublesome assets, the banks will get capital injections and no equity dilution. The bondholders will be happy too - lower risk base, higher risk cushion imply lower spreads and thus higher prices. The taxpayers will have to get a second round of squeezing as repayment to the state will be required to compensate for losses generated by the overly-generous original pricing scheme. These will take form of 'Guarantee' dividends to the Exchequer which, alongside with existent preference shares, will lead to a widening in lending spreads and banking fees. Customers will have to pay the Government via the banks.

Why would the ECB go for this? Ah, the birdie told me that the ECB, desperate to find some solutions to similar banking problems elsewhere, is keen on using Ireland as a sort of policy lab. Given it's newly acquired mandate to print cash in quantitative easing exercise, this means the price of such Social Laboratory Ireland is low enough for them to deal on Irish 'bad' bank.

All happy, save the soon-to-be-stuffed-again taxpayers...


A follow up on the Budget
Following the Budget last night, Irish media has gone into an overdrive. The simplistic terminology and naive analysis dominate the space between print, radio and TV with commentators heralding the Budget as:
For anyone who still needs a more down-to-earth explanation of the budget, here is an illustration 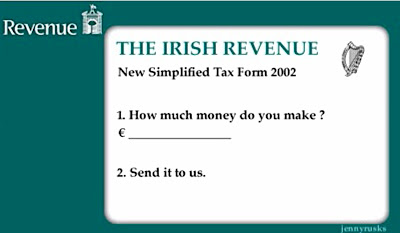 The media reaction to the Budget is hardly surprising.

Irish intellectual milieu is based on a vicious pursuit of any independent analysis and thought with a goal of eliminating any possibility of serious dissent. Anyone with a point of view departing from the consensus is left jobless and/or branded as a hack or a generally diseased mind.

How many dissenters are ever asked to advise or brief the policymakers? None. How many non-consensus economists work for the Government? None. In our Universities? A handful and then only on junior posts. How many differing opinions does the Irish Times feature in its main pages? Virtually none, unless they can be comfortably pigeonholed into some agenda slot.

Hence today's reaction. But also the continuous drift of consensus opinion to the La-La land of pseudo intellectualism of some of our left-of-centre pontificates. This is not reflective of any public opinion in the streets, but it is reflective of the incestuous nature of our public policy discourse.

At least in the Soviet Union they respected dissidents enough to physically hunt them. Here, we are simply growing immune to independent thinking.