US Consumer confidence index jumped to 39.2 in April from 26.9 in March, according to the Conference Board report. This was the fourth largest gain in the index history (32 years), but most of the gains came from the expectations component (up from 30.2 to 49.5), not from the current conditions gauge. Good comparative - tying in political data (polls) with the recent confidence gauge trend here. This is fine, until one recognizes that misery indices correlation with confidence indices is not in the area of leading indicators of actual activity. What does this mean? In simple terms, if misery index falls, ahead of consumer confidence rising, all we know is that there should be some secular components of the former that are driving the latter. This is exactly what is happening and the driving components are:
Both are temporary and both have nothing to do with the fundamentals of the cycle. In other words we are still in a recession and there is no:
But, one consolation - Americans still harbour confidence in the new White House administration and the Fed to get them out of the mess. In the words of Jack Nicholson's character, President Dale, in Mars Attacks, at least Americans believe that: "they still have 2 out of 3 branches of the government working for them, and that ain't bad". In the case of Tax&Waste Brian, Brian and Mary, of course, an entirely different memorable quote from the same screen classic comes to mind, when evaluating the Irish Government policies - this one from Ricchie Norris character: "Wow, he just made the international sign of the doughnut". Doughnut, as in 'zero' stimulus policy that is.


And Case-Schiller House Price Index numbers are not all that optimistic as some reports suggest - see superb analysis here. Of course, media reports that CS has declined at a modertaing pace. Surely not, as Calculated Risk analysis shows, house "prices are tracking the More Adverse scenario so far" for the second month in the row. And seasonality also matters...

GM bonds valuations: Unlike Brian Lenihan with his optimistic assessment of NAMA, bond holdersin GM have not been overly enthused by the yesterday's offer of a bonds-for-equity swap (see details here) that would have yielded a straight-off recovery rate of a recovery rate of 45% (at flat current price per share of $2.03) on its senior debt. Remember, Brian hopes for a recovery rate of at least 102% on the NAMA-purchased loans financed using Irish bonds over 5-year term (assuming original NAMA discount of 20% on loans value). Why? GM bondholders did the maths and saw that the trade unions would receive a 50% recovery in cash and a 39% stake in a new GM in exchange for their $20bn in debt holdings. The bondholders, holding some $27bn in GM bonds and having the same legal rights as the unions, would only receive a mere 10% of the restructured company and essentially no cash. Rotten deal at 55% discount rate on GM senior debt for US would-be debt-sellers? What about a great deal for debt sellers in Ireland Inc's development fiascos - at 80cents on the euro and an equity-repair via second round recapitalization... No wonder the financiers are lining up to support NAMA.


The Statist Resignation in the EU Parliament: You might as well think we got an unusually candid interview from a Member of the Supreme Soviet - that notional 'Parliament' of the USSR whose elected members were simply destined to rubber-stamp the decisions taken by unelected Politburo of the CPSU. EU's Parliamentary Socialist group leader, Martin Schulz, in an interview with FT Deutschland said that he holds no hopes of his group having a say in appointing the EU Commission President should it win the European Parliament majority in this year's elections. Per those who missed the main point, let me run it by you once again: your party get elected with a majority, then:
Of course, there is a third way - a Presidential system whereby the executive is elected directly by the people, without overlap with the Parliamentary elections. Then again, Mr Barroso never really stood for an election in Europe. Forget the merit of each individual leader (and Barroso is not exactly scoring high marks on his tenure) - this is simply undemocratic. Full stop.


Insider Selling Takes Off: per recent Bllomberg report (here) "Insiders from NYSE-listed companies sold $8.32 worth of stock for every dollar bought in the first three weeks of April... That’s the fastest rate of selling since October 2007, when US stocks peaked... The $42.5 million in insider purchases through April 20 would represent the smallest amount for a full month since July 1992, data going back more than 20 years show. That drop preceded a 2.4 percent slide in the S&P 500 in August 1992." So at least some of the insiders in leading US companies are now feeling that the market is overbought. This would be consistent with the management observing some internal dynamic in the companies' fundamentals pointing that a deflation of a recent rally is imminent.

Economist is back in the fundamentals game: this week's Economist has an excellent table: 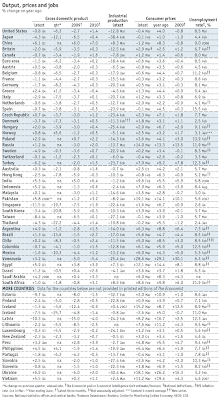 Scary thought, but do check out Ireland:
Someone from London financial circles was telling me that before we run into troubles, in his estimate, there will be defaults in the Baltics, APIIGS and the UK. I beg to differ - by these (and pretty much all other) numbers we are well ahead of the rest of the 'sick puppies' club, since for the entire APIIGS (Austria, Portugal, Ireland, Italy, Greece and Spain) we rank:
So run by me again - we will be in trouble only after the rest of APIIGS?
Posted by TrueEconomics at 9:15 AM