In the month Office machinery and computers prices fell 2.1%, and Basic chemicals were down -1.1%. Some multinationals are taking a hit. There were increases in Pharmaceuticals and other
chemical products (+13.1%), Other food products (+11.8%), and Basic chemicals (+8.9%). SO some other MNCs are doing ok, although short-run price hikes can come back and bite these manufacturers. Building and Construction All material prices decreased by 2.4% in the
year since March 2008 and by 0.6% in March 2009. Not enough, if you ask me, and this leads to a question concerning the Government plans to achieve expenditure 'savings' on the back of cheaper capital construction costs... Year on year, the price of Capital Goods decreased by 0.6%, while there was a monthly price decrease of 0.3%.

Of course, our heroic boys of CER/ESB/EirGrid-controlled energy sector are turning out more and more price gauging as "Energy products increased by 3.2% in the year since March 2008, while Petroleum fuels decreased by 23.7%. In March 2009, there was a monthly decrease in Energy products of 0.9%, while Petroleum fuels decreased by 3.8%." Well, table below does show this in indisputable terms...

Is it time to fire CER? In my view, long overdue!


UK Budget
Some in Ireland are making 'happy faces' at the UK Budgetary numbers released yesterday. The UK forecasted that the General Government Deficit will reach 12.6% in 2009 - some 1.85% points above the 10.75% GGD built into Irish mini-Budget of April 7. A catch here is that I personally do not believe the Irish figure, having predicted (here) that our GGD will reach 12.5-13.0% this year - right about where the UK is placing its own expectations.

Going on with the misguided cheerleaders, today's Davy note says: "Moreover, gross debt to GDP is set to remain much higher in the UK than in Ireland." Hmmm... that is true only when it comes to direct public debt, excluding such 'trivialities' as financial sector commitments and guarantees (which total $641bn or 280% of our GDP in Ireland and only $375bn or 13.4% of the UK GDP: see here). Oh, yes, of course, some of the moneys on both sides of the Irish Sea is going to count as 'investment' on public balance sheet, but to you, me and the rest of the productive economy there is no difference - we will be paying the price in our taxes, investment or not. And the cheerleaders are forgetting another small point - Ireland's total debt (public and private) is actually much larger than that of the UK (see here, and the chart below - from here). 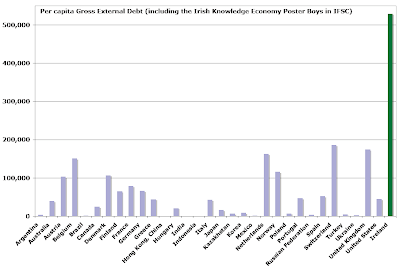 Now, I know I won't be welcomed by Davy in years to come for pointing this out, but Reality Bites!

Just to be fair, though, Davy also say that "Gross debt is a different matter: recapitalisation funds that need to be borrowed affect this metric. So the projected gross debt ratios will be quite fluid". Yeah, so fluid that we'll need buckets, not shovels to get that NAMA mess under control. UK liability under banks recaps is likely to be ca 10% of their overall guarantees commitments - taking into account the already substantial paydown of funds and the maturity of the downturn over there. So take it to be $37.5bn. Ireland's commitments are going to be around the same percentage share, or $64.1bn, of which only $9.8bn has been paid down so far. In the mean time, Ireland's benchmark yields on Gov bonds are in 420bps territory, UK's - 237bps. Shhhh... don't say it out loud, but it does look like Ireland's advantageous debt position, relative to the UK, is a quagmire. And no, this stuff is not simply 'academic'. Financing our 'low debt' position will cost us €1.83bn in interest expenditures pa. Financing the UK's 'perilous borrowings' will cost them €635mln per annum. Doughhhhh, as Homer would say it, all is grand in the Davy-world of voodoo economics...


Regional subsidies
Yesterday, ESRI published an interesting article: Who is paying for regional balance in Ireland? (available here). It is a worthy quick read if only for one reason - after hearing continuously the whingeing that passes for regional economic policy in this country and the anti-Dublin biases out in the country-side, the article puts few facts straight.

"...real resource transfers per head of population (i.e., the per capita excess of expenditure over revenue), have increased over time. In other words, redistribution across regions has increased over time. These transfers tend to flow from richer to poorer areas – a large negative correlation between the implied transfer of resources and real per capita gross value added. ...Expenditure is positively correlated with real per capita output (Gross Value Added), but tax revenue is even more strongly correlated with real per capita output, implying that the fiscal system operates to transfer resources from richer to poor regions."

Put in real (as opposed to ESRI's) terms, this means that few productive parts of the country are subsidising numerous less productive ones. Is this a good thing? Well, no.
"Overall, Dublin and the South-West region are substantial net contributors. For example, in 2004 both Dublin and the South-West contributed just over €2,000 per person while in the same year the Midlands region received a transfer of just over €3,000 per person." This is nice. As a person living in Dublin, I am apparently sending some €6,000 of my family income to the Midlands. This means that my 1,100sq ft Dublin city household is paying for some folks living in average 2,000 sq ft houses in the middle of nowhere. But should I choose to avail of the landscape and natural amenities that my money is paying for out there, I just might get a shovel-pat on my back from the subsidies-receiving locals. Hmmm...

"In 2004 just over €3 billion were transferred from the ‘net surplus regions’ Dublin, South-West and Mid-West to the other regions. Overall the tax burden (including social contributions) averages at €11,000 per person in 2004 with a high for Dublin of almost €14,000 per person and a low of €8,500 per person in the Midlands." Yes, this does account for those Midlands inhabitants working in Dublin too, so no arguments about 'We work in Dublin, so we are productive too' apply.

But ESRI would not be itself if there was no voodoo of socialist economic dogma in the article somewhere. This comes at the end: "The finding that the system provides a significant degree of regional equity is largely the result of the centralised nature of revenue collection in
conjunction with the aim to provide similar levels of service across the full range of government activities in all regions. In order to achieve a similar level of equity with a less centralised system would require a more sophisticated system of fiscal equalisation payments across regions. Thus, while many have argued that the Irish system is too centralised this centrality turns out to be an asset in terms of achieving regional equity."

Run this by me again, please! 'Equity' apparently happens when younger and more productive workers of Dublin and South-West are paying older and less productive workers in the rest of the country? 'Equity' also means that we must achieve 'fiscal equalisation payments across regions'. This is the same economic illiteracy that argues that Sub-Saharan Africa can achieve growth by taxing the developed world.

One thing that was lacking in this paper, and indeed is lacking in overall research on regional transfers is how much more dependent on subsidies are specific areas. One that comes to mind is the area covered by the patchwork of various Gaelic ethnic enclaves sponsored by the Government. Another one - the patchwork of useless 'gateways' we have created across the country.

Yes, folks, ther eason we are forced to accept gang crime in Limerick and parts of Dublin, roads gridlock in the capital, lack of proper public transport, poor broadband services, horrific quality of landline phone services, overstretched schools and universities infrastructure in Dublin and the rest of the mess we call urban living in the Capital City is because we want 'equity' and 'equality' between those parts of the country that work and those that collect subsidies. Regional policy indeed...
Posted by TrueEconomics at 9:24 AM