Update: This country is in a crisis. The Government is about to put out a major Budget. It itself is in crisis facing the questions as to whether they have a mandate to rule. And amidst all of this, Mr Cowen puts forward Willie O'Dea to advocate Cabinet's positions on the economy? banks? public finances? What O'Dea has shown in this performance - a mixture of remarkable ineptitude (in addressing the real issues faced by the economy) and arrogance (in espousing the belief that his Government can get away with the squander of funds and disastrous policies have marked and still mark years in power) - was embarrassing and insulting. It is time for this Government to resign. Now! No renewal or regeneration or recovery of any kind can take place as long as the failed leadership and ministerial 'talents' like Willie O'Dea and Mary Coughlan remain in place.


Daft.ie report is out on house prices and given that the media has covered the results, I would just post the link to the report (here).

Liam Delaney has an excellent essay/intro commentary to the report. Here is a quote:
"This report - combined with the recent labour force figures - indicates considerable hardship for those in once solid middle-class jobs that are now facing a potential double-whammy. People will inevitably feel even worse when they see neighbours and friends who are in better situations. Consider the position of a college graduate who purchased in Dublin in 2006, based on the income from his financial services job (now gone), to the position of his neighbour who secured a public sector position on leaving college and purchased in 2001. While neither is laughing, the latter must at least be considering himself the better off of the two. They are certainly not in the same boat and the widening rift in society being generated by asset price decline and employment uncertainty is the defining theme of our time."

All I can add to this is that of course the public sector worker is also protected by Messrs Cowen and Lenihan who are working hard to make sure the unions are pleased and appeased. The private sector worker is screwed. Most likely, due to her high income in the past, she is considered rich by our Government and given that she worked in the financial services she is described as pariah by the unions and the Left. Monetary loss, job loss, tax hikes, moral abuse by the Fintain O'Toole-Joe Higgins crowds, and negative equity... and more tax hikes... this is her lot in the 'Fair Society' that is Ireland of Brian, Brian, Mary and the Bearded Men of SIPTU/ICTU.

Here we have to speculate, but Publishing & Printing and Chemical Products were the only two sectors with significant new acquisitions over 2008. Now, the former is small in absolute terms, the latter is not. Both are not exactly the sectors where large land banks held off-the-balance sheet could have been brought back via an acquisition. Both sectors, however recorded no matching increases in other capital acquisitions. So this not a story of growth either. I would suspect that on Chemical Products sector side, there could be some capital plays involving transfer pricing.

Industrial Stocks data was also out today. Chart below (courtesy of CSO) illustrates the rate of production slowdown catch up with demand collapse in Q4 2008. 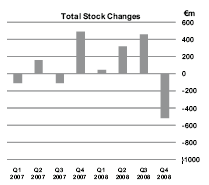 Notice a distinct ramp up in total industrial stocks between Q1-Q3 2008? This was the denial stage - companies kept churning out vast amounts of stuff that found fewer and fewer buyers. Then Q4 2008 hit - jobs cuts, shorter work days etc and you have a fall off in stocks. Now, this is clearly not a leading indicator of things to come, but... the thing to watch is whether the stocks recover to positive growth territory in Q1 2009. If they do, given the levels of layoffs in January-February 2009, there will be no quick rebound in the economy, as return to positive growth in stocks would imply that diminished productive capacity is not restoring supply-demand equilibrium. A strong bounce in Q1 2009 will potentially signal further layoffs down the road...
Posted by TrueEconomics at 8:36 PM